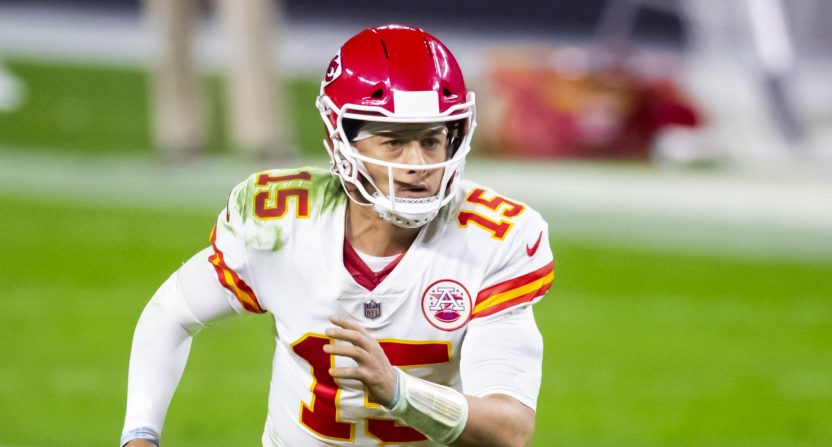 We’re monitoring the NFL’s top MVP candidates on a weekly basis. Entering the home stretch of the 2020 regular season, here’s a look at the eight players best aligned for MVP runs based on the first 11 weeks of the campaign.

8. Tennessee Titans RB Derrick Henry: The NFL leader in rushing yards is a huge reason the Titans are a contender. He’s now scored two game-winning touchdowns in overtime this season. The guy is a beast, and he could have a shot with a late-season hot streak like he had in 2019.

7. Pittsburgh Steelers QB Ben Roethlisberger: If the Steelers go 16-0 and Big Ben can improve his rate-based stats a fair bit, he might win this thing. Those are big “ifs,” but the quarterback of a 10-0 team has to be included.

6. Buffalo Bills QB Josh Allen: Allen was so good in the first quarter of the season that he remains in contention mainly because there’s a chance he suddenly gets as hot down the stretch. If that happens, the third-year top-10 pick will be in the running.

5. Las Vegas Raiders QB Derek Carr: It will be hard for the 29-year-old to win this thing, because he isn’t quite as dazzling with his downfield passing as the guys ahead of him and the Raiders won’t win their division. But that doesn’t change the fact he was magnificent in a tough loss to the Kansas City Chiefs, and is the league’s fifth-highest-rated passer for a contending team.

4. Seattle Seahawks QB Russell Wilson: He was fading significantly before a strong performance to beat the Arizona Cardinals in Week 11. Still, those 10 interceptions could be a problem.

3. Arizona Cardinals QB Kyler Murray: Even with that loss to Wilson’s Seahawks, the sophomore continues to rise. He posted a triple-digit rating in that defeat, and has simply been better than Wilson since the start of October. Wilson vs. Murray is going to be fun to watch down the stretch, and for years to come.

2. Green Bay Packers QB Aaron Rodgers: A tough L to the Colts in Week 11 hurts Rodgers’ case, simply because the Packers have three losses now and that’s part of the equation. Still, he’s the NFL’s highest-rated passer, and he’s guiding a first-place team.

1. Kansas City Chiefs QB Patrick Mahomes: But Mahomes leads the NFL in QBR (85.3) and touchdown-to-interception ratio (27-to-2) for the 9-1 Chiefs. That’s hard to deny. His lead is widening.