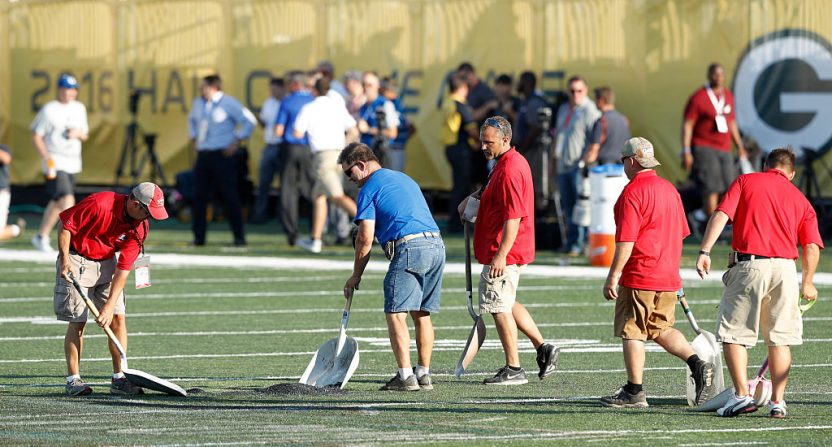 It is moving day for the lawsuit over the cancellation of the NFL Hall of Fame Game this past season. Rather than hear the case in federal court in California, the case is moving to Cleveland’s federal court.

Fans were supposed to be treated to a preseason contest between the Green Bay Packers and Indianapolis Colts. Instead, the horrific condition of the field once again reared its ugly head and forced the cancellation of the game for “players safety” concerns.

It was an ugly end to what was supposed to be a beautiful weekend for Packers fans celebrating the induction of legendary quarterback Brett Favre. But, a bad paint job turned the field in to a complete skating rink and players safety was truly in danger.

So, why the need for a change in venue? Originally the lawsuit was filed on behalf of a Los Angeles resident who paid over $1,000 per ticket and traveled to Ohio for the game that never occurred thanks to the NFL’s negligence.

According to Cleveland.com, the judge’s ruling was pretty simple:

“The Game was to be played in Ohio and the people responsible for its cancellation are not in California,” Hatter’s order says.

The case is now assigned to U.S. District Judge Christopher Boyko in Cleveland.

The NFL initially only offered a refund of the game ticket price to fans affected by the last-minute cancellation of the game. However, the NFL barked up the wrong tree of lawyer Michael Avenatti for the second time in a decade.

Avenatti was the one behind a lawsuit that eventually saw the league fork over a cool $20 million for the “tickets, but no seats” fiasco at Super Bowl XLV held at AT&T Stadium. However, this case is different as there hasn’t been a class-action status granted to the case and the Hall of Fame appears to be the bigger target in this incident.

For its part, the Hall of Fame appears happy with how things are going in court to date. The change in venue certainly means there is less in travel costs, and they feel like they have a good case to present thanks to the steps taken to remedy the issue early on.

The Hall of Fame said in a news release that it is pleased with Hatter’s ruling. It also said it offered reimbursements, fees and other benefits to those who purchased tickets to the canceled game.

There’s no one disputing the fact that fans were offered a refund, but the issue is that it was only for the tiny face value of the ticket and not for the amount paid for said ticket in full.

Apparently the lesson the NFL is about to learn is — don’t rob Green Bay Packers fans of the experience of seeing their team. They’ll sue you and likely win too.