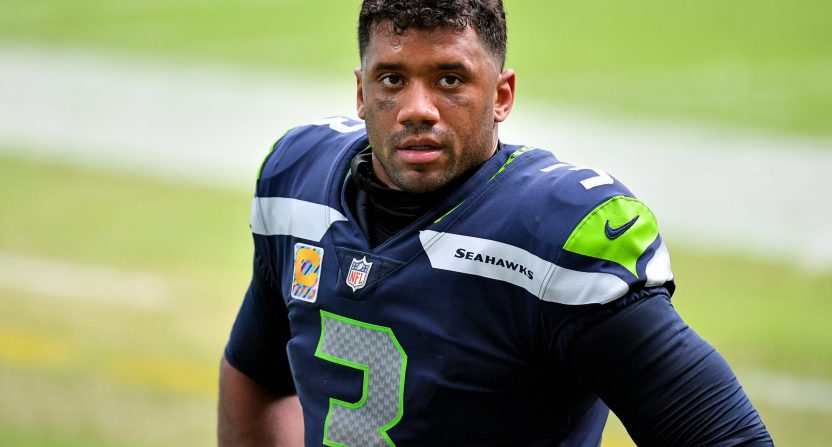 With the 2020 NFL season now just about exactly 25 percent complete (just the COVID-delayed Tennessee Titans and their Week 4 opponent, the Pittsburgh Steelers, have yet to reach the quarter pole), this seems like an appropriate time to hand out on-the-fly awards based on the first four weeks.

Early on, Wilson is on pace to shatter every rate-based passing record there is for a team that is 4-0 despite some clear flaws in other areas. Still, Josh Allen has been practically perfect for the 4-0 Buffalo Bills (arguably with a little more support), Aaron Rodgers is suddenly playing the best football of his career for the 4-0 Green Bay Packers, and Patrick Mahomes has an 11-to-0 touchdown-to-interception ratio for the 4-0 Kansas City Chiefs. Wilson’s numbers are undeniable right now, but if he falls off even a little bit, this will be an unreal race.

Offensive Player of the Year: Wilson

Still, the fact is Wilson is on pace to complete 75.2 percent of his passes for 64 touchdowns to four interceptions, a 9.4 yards-per-attempt average and an earth-shattering 136.7 passer rating. That makes it impossible to place anyone else in this spot.

It’s basically a toss-up between the undrafted Illinois State product and Kansas City Chiefs’ first-round sensation Clyde Edwards-Helaire, but Robinson has slightly favorable numbers with much less support. What a story this could be.

The 22-year-old second-round pick has immediately helped rejuvenate the Tampa Bay secondary. Two sacks, a forced fumble, 25 tackles, and just seven completions allowed thus far. With no defensive rookies truly putting on a show thus far, Winfield has made enough of an impact to get the nod.

It’s actually a football miracle that the 49ers are 2-2 despite the fact they’ve been hit harder by injuries than any team I’ve ever seen over a four-week period in my 14 seasons covering the NFL. That’s a testament to the coaching job Shanahan has done with a squad that has still outscored its opponents by a 36-point margin.

COVID-19 cost him a chance to put an exclamation mark on this in Week 4, but he’s still looked close to his former MVP self as both a rusher and a passer thus far.