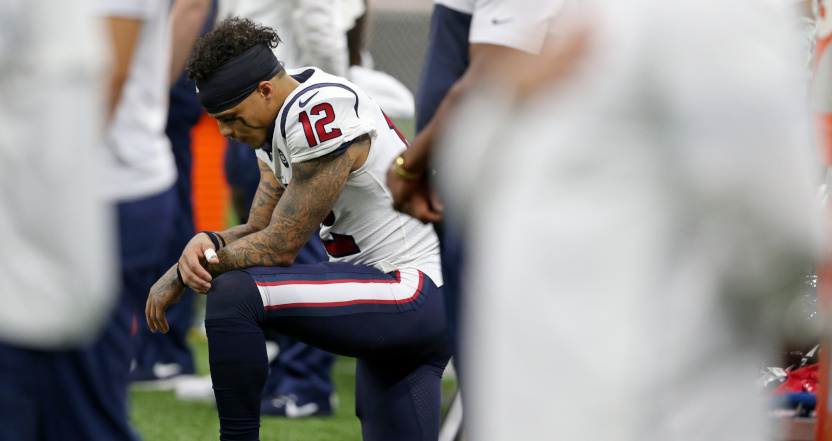 There are plenty of people and organizations who have come out with thoughtful responses to the killing of George Floyd in police custody (and other recent killings, including those of Breonna Taylor and Ahmaud Arbery) and the subsequent protests, including police chiefs, athletes, entertainers, sports media figures, and coaches. But the NFL’s statement on this was criticized by many fans and media members for not saying much of anything, and some of the most notable criticisms came from Houston Texans’ wide receiver Kenny Stills, who was very blunt in his response.

The NFL’s statement has received criticism on several levels, from it referring to these killings only as “tragic events” to its lack of specificity on what the league is actually going to do in “continuing the important work.” But perhaps the most interesting thing with the NFL putting out a statement here is the way they’ve previously been involved in this conversation, especially when it came to peaceful protests from Colin Kaepernick and others (including Stills, who’s regularly knelt for the national anthem, including in the September 9, 2019 game pictured above) about racism in policing and other areas of society. NFL owners decided that Kaepernick was not worth employing despite his proven on-field skills thanks to his protests on these issues, and while the league has long tried to insist that their teams not giving him a contract was only about his skills (despite a whole lot of evidence to the contrary), former NFL vice president of communications Joe Lockhart fully shattered that line of argument in a CNN column Saturday:

When I was an executive in the National Football League a few years ago, our organization was consumed by the case of Colin Kaepernick, the quarterback whose silent kneeling protest against police brutality arguably led him to lose his NFL career and not be re-signed by any club. No teams wanted to sign a player — even one as talented as Kaepernick — whom they saw as controversial, and, therefore, bad for business.

The NFL commissioner, Roger Goodell, and other league executives tried to persuade the teams to change their minds. The league sent owners and players around the country to try to lead a dialogue on race relations and to move, as the sociologist and human rights activist Harry Edwards said, “from protest to progress.” Though Kaepernick didn’t get his job back, I thought we had all done a righteous job, considering.

I was wrong. I think the teams were wrong for not signing him. Watching what’s going on in Minnesota, I understand how badly wrong we were.

…But for many owners it always came back to the same thing. Signing Kaepernick, they thought, was bad for business. An executive from one team that considered signing Kaepernick told me the team projected losing 20% of their season ticket holders if they did. That was a business risk no team was willing to take, whether the owner was a Trump supporter or a bleeding-heart liberal (yes, those do exist). As bad of an image problem it presented for the league and the game, no owner was willing to put the business at risk over this issue.

They were willing, though, to spend those millions to help address the problem of racial division in the country. For me, while I was uncomfortable with Colin not being signed, I told myself we were righteous in doing the hard work of making progress.

It’s fascinating to see Lockhart actually admit that owners chose not to sign Kaepernick over the perceived impact on their business. That’s something the NFL has long denied. But Lockhart was certainly in a position to know the details there, and his admission of that just makes it even more obvious how the league’s owners drove Kaepernick out based on his protests rather than his ability. And that’s something that the NFL will need to address at some point, especially in light of what’s going on now. And it makes weak statements like this one look even more disingenuous, and it makes it understandable why Stills responded with “Save the bullshit.”