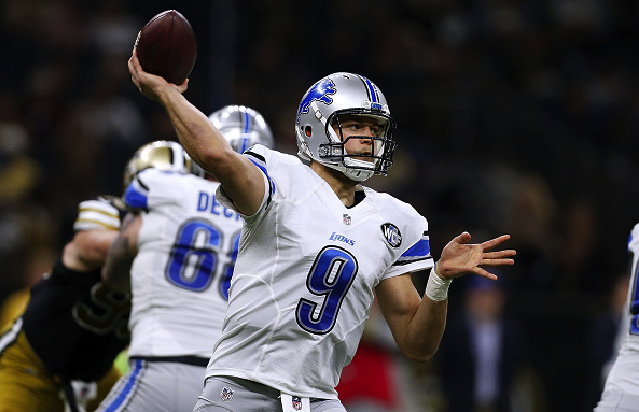 Four weeks remain in the 2016 NFL season, and it’s starting to become clear which teams are going to make the playoffs. And some surprises have emerged in that group.

The playoff picture still has time to change a bit, but regardless of the season, the NFL always comes down to this simple hierarchy: If any two given teams played, who would win? That’s what fans really want to know, that’s what power rankings are all about, and that’s how the 32 NFL teams are slotted here each week.

32. Cleveland Browns
What’s left to say? The Browns spent a Week 13 bye thinking about being 0-12.

31. New York Jets
The most brutally embarrassing Monday Night Football performance in a long, long time dropped them all the way to the bottom of the non-Browns list. Ryan Fitzpatrick is doubling down on every single mistake, and everyone in green and white has clearly checked out of the season.

30. San Francisco 49ers
Well, “Colin Kaepernick is back” was a fun narrative while it lasted. The 49ers’ complete capitulation to the Chicago Bears featured a quarterbacking performance so miserable it got Blaine Gabbert back on the field. Right now, it feels like nobody drawing a 49ers paycheck deserves to keep their job — and if the guy who signs the checks could somehow get fired, he’d deserve it, too.

This Jared Goff pass did not go as planned…

29. Los Angeles Rams
The one thing that was working right, the defense, has fallen apart. The Gronk-less New England Patriots were in a perfect trap-game situation and the Rams laid out the welcome mat. The leak of head coach Jeff Fisher and general manager Les Snead’s contract extensions couldn’t have come at a more hilarious time.

28. Jacksonville Jaguars
Ooooh, almost got ’em. Again. If ifs and buts were candy and nuts, Gus Bradley wouldn’t be getting fired for Christmas.

27. Chicago Bears
Love the moxie from prodigal quarterback Matt Barkley, rookie pass-rusher Leonard Floyd and this entire Bears team that refuses to accept the narrative and go away. Can they shock the Lions a second time this season?

With Derek Anderson at starting QB for Carolina…

The @Seahawks intercept him on the FIRST PLAY.

26. Carolina Panthers
Well, that escalated quickly. What should have been a hard-fought game against the Seattle Seahawks went as wrong as physically possible from the first play of the game. It wouldn’t surprise at all if this team added a couple of key pieces and went right back to dominance in 2017, but I’m done ranking them on how good they should be.

25. Cincinnati Bengals
Heyyyyyy, there’s the Bengals team we’ve been waiting to see all year! Randomly, one of the league’s most talented rosters got together and played like it, routing the tough but similarly win-challenged Philadelphia Eagles. It’s too little, too late, but if the Bengals finish strong they could maybe pry their championship window back open.

24. Indianapolis Colts
Their demolition of the Jets couldn’t have been any more impressive… but of course, there’s only so impressive demolishing the Jets can be.

23. Houston Texans
What’s more impressive, routing an awful team determined to implode against whomever they play, or losing closely to a decent team with a strong home-field advantage? The Texans and Colts have been practically interchangeable all year, but I’ll give Houston the nod for now.

22. Arizona Cardinals
What do you even do with the the Cardinals? They’ve looked great against good teams and horrible against middling ones. A convincing win over a Washington squad that looked to be on the fast track to the playoffs gives the Cardinals a deserved bump.

21. San Diego Chargers
The Chargers keep leading the league in missed opportunities, with yet another one-score loss against a strong team.

20. Tennessee Titans
If the Colts didn’t have the Titans’ number this year, they might be 8-4. As it is, the Titans are 6-6, but playing better football over the last eight games than their 5-3 record would suggest. They’ve outscored opponents by 4.25 points per game over that stretch, and certainly look ready to give the Broncos and Eagles all they can handle over the next two weeks.

19. Philadelphia Eagles
Plenty of metrics still rank the Eagles as one of the best teams this season. They’re fifth in Football Outsiders DVOA, ninth in Simple Rating System, have outscored their opponents by an average of 1.9 points per game despite a very difficult schedule, and generally are better than 5-7. But whoo boy, was that a terrible loss to the Bengals, and wow, does Carson Wentz not look nearly as good lately.

18. Green Bay Packers
The Packers should be blowing out teams like the Texans in the Lambeau Field snow. They’re 6-6 and plenty dangerous, but even this low feels like too high.

17. New Orleans Saints
After an effortless thrashing of the Los Angeles Rams, the Saints hosted the contending Detroit Lions and got thoroughly housed. They picked the worst possible time to have their worst game of the year.

16. Buffalo Bills
For two and a half quarters against the league’s hottest team, the Bills were everything we thought they could be. Then they spent the remaining quarter-and-a-half reminding us who they actually are.

Double-coverage.
But it really didn't matter.

15. Washington
Dropping a key game against a flailing Cardinals squad? No sir, I don’t like that.

14. Miami Dolphins
The win streak had to end some time, right? That it was the Tampa Bay Buccaneers who again made the Dolphins look flawed speaks as much to how good the Bucs as how flawed the Fins are.

13. Minnesota Vikings
I’ve been so disappointed by the 1-5 run that’s followed the Vikings’ 5-0 start that I feel like this is way too high. And yet, how low can I drop them when they were one terrible call away from taking the league’s best team to overtime?

Joe Flacco is on

12. Baltimore Ravens
Um, nobody look now, but the Ravens have the league’s No. 2 scoring defense and Joe Flacco just played a legitimately great game. They’re going to give the Pittsburgh Steelers a very serious run for this division.

11. New York Giants
There’s only so low I can drop an 8-4 team, but the massive regression to the mean I’ve been predicting for weeks is well underway. They were completely outmatched at Pittsburgh, and will be lucky to win two of their final four games against Dallas, Detroit, Philadelphia and Washington.

10. Denver Broncos
The Broncos managed to salvage a win against revved-up Jacksonville team that was in perfect position to pounce on Paxton Lynch. They get credit for that (good teams avoid trap games), but not too much credit (good teams don’t almost lose to Jacksonville).

9. Pittsburgh Steelers
The Steelers are probably “really” higher than this, but every time we’ve believed in them, they’ve let us down. This team is way too inconsistent to just put up in the top five and leave them there. But they’re also way too good to drop to the middle of the back. The one spot they can’t defensibly occupy is “pretty decent, but nothing special,” and yet due to the nature of the Power Ranking beast, that’s where I have to put them.

8. Detroit Lions
Everybody and their dogs predicted the Lions would go into the Superdome and get ripped apart. Instead, the Lions played their first complete 60-minute game of the season and firmly established themselves as legitimate contenders. Unless the Bears upset them for the second time this season, the Lions will be 9-4 and gunning for a playoff bye the next time this column runs.

7. Atlanta Falcons
The Falcons snatched defeat from the jaws of victory in the most unlikely way imaginable, saddling their record with yet another not-quite-deserved L. Yet the record now shows they have five Ls in 12 games, and relying on their No. 1 ranked scoring offense to just plain outrace teams taking advantage of their 29th-ranked scoring defense isn’t working so well anymore.

6. Tampa Bay Buccaneers
Yeah, that’s right: I’m putting the 7-5 Bucs ahead of the 7-5 Falcons. The Falcons are 4-4 in their last eight games, while the Bucs are 6-2. The Falcons may have the tiebreaker right now, but that’ll only matter if the Bucs don’t keep winning more games than the Falcons.

5. Kansas City Chiefs
It was the most improbable finish in a season full of improbable finishes — but Eric Berry really did read and jump that route, and the Chiefs really did beat their second straight playoff-caliber opponent by the slimmest possible margin. I still have my doubts about Andy Reid in the playoffs, but it’s looking more and more likely the Chiefs will at least get there.

4. New England Patriots
Last week, I was citing the barely-perceptible, but definitely extant dropoff over recent weeks. Now I have to contend with the dual reality of the Patriots A) being demonstrably much worse without tight end Rob Gronkowski, who’s now lost for the year, and B) having effortlessly handled one of the league’s most physical defenses anyway. I’m going to put them… here.

3. Seattle Seahawks
Much like New England, I have to power-rank the Seahawks on both the strength of their mighty 40-7 dismantling of the Panthers, and also the season-long loss of their all-everything safety, Earl Thomas. But they beat the Pats in Gillette Stadium just a few weeks ago, and so the answer has to be “at least one better than the Pats.”

2. Oakland Raiders
… but the Oakland Raiders proved they can beat anybody, anywhere, however they want this week. Turning a 24-9 embarrassment at the hands of the Buffalo Bills into a 38-24 embarrassment OF the Bills in the span of about a quarter of football just proves the Raiders are the scariest team in football right now.

1. Dallas Cowboys
But “scariest” doesn’t automatically translate to “best.” Just because the Cowboys haven’t really opened up a can and whooped on anybody since the Browns in Week 9 doesn’t mean they aren’t still the hardest out in football. The Vikings played as well as anybody could play against this team, and it still wasn’t good enough. Just imagine if them Cowboys hadn’t lost by one point in Week 1.