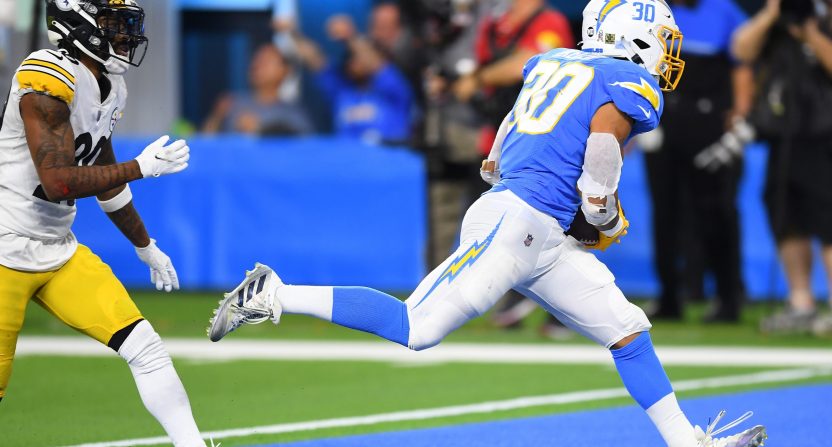 The Pittsburgh Steelers made an incredible comeback to take a late lead over the Los Angeles Chargers on Sunday Night Football, but the Chargers ultimately came away with a 41-37 victory.

First, we’ll show what happened in the fourth quarter, before showing how the NFL world reacted to the craziness.

Pittsburgh trailed 27-10 entering the fourth quarter, and it was a 27-13 game when they blocked a punt and got the ball at the Los Angeles three-yard line with 12:33 remaining.

After the Chargers were called for pass interference on fourth-and-goal, Najee Harris ran for a one-yard touchdown to make it a 27-20 game (after the Chris Boswell extra point).

And the Steelers took advantage of that blocked punt by scoring a touchdown to make it a 27-20 game- after trailing 27-10. 🏈 (2/2) pic.twitter.com/KPRYKcrfMX

It appeared that the Chargers had finally put the game away when running back Austin Ekeler scored his fourth touchdown of the night with 8:48 remaining.

Austin Ekeler with his fourth touchdown on the night! 🏈🔥🔥🔥🔥 pic.twitter.com/vm0PA4yc91

But Ben Roethlisberger connected with Eric Ebron for a Steelers touchdown on the ensuing drive, making it a 34-27 game with 4:49 remaining.

Roethlisberger hits Ebron to bring it back to a one-score game in LA. #HereWeGo

And then the Steelers got the ball back on a Cam Sutton interception, after Cam Heyward tipped the Justin Herbert pass.

Pittsburgh gets the ball back! #HereWeGo

Well, the Steelers tied the game up 34-34 after Roethlisberger and Pat Freiermuth teamed up for a touchdown just two plays after the interception.

The Steelers have outscored the Chargers 24-7 in the fourth quarter to tie the game 34-34! 🏈 pic.twitter.com/hOVwAE6Z9V

On the ensuing Los Angeles possession, Chargers head coach Brandon Staley chose to go for it on 4th-and-goal at their own 34-yard line, and Pittsburgh stuffed them with 3:48 remaining.

The Chargers go for it on 4th-and-inches at their own 34 and are stuffed!

An incredible fourth quarter from the Steelers. pic.twitter.com/tV6HT7LExn

Four plays later, Boswell hit a 45-yard field goal to give the Steelers a stunning 37-34 lead with 3:29 remaining.

But that lead didn’t last long for Pittsburgh.

Herbert — who threw for 382 yards and even ran for 90 yards — connected with Mike Williams for a 53-yard Chargers touchdown with 2:09 remaining. And that would serve as the game-winner for Los Angeles.

This would’ve been another classic Chargers meltdown loss, but Herbert — a star second-year quarterback — and company found a way to get it done in the end.

Here’s how the NFL world reacted to this incredible Sunday Night Football game:

The #Chargers held off a late comeback by the Steelers, who crossed the 50% win probability mark for the first time with 4:18 remaining in the fourth quarter and peaked with a 68% win probability 38 seconds later.#PITvsLAC | #BoltUp pic.twitter.com/7lZf43VMAG

The Steelers’ best strategy for stopping Justin Herbert is punching him in the ding dong. pic.twitter.com/XwPdFZrhuj

Chargers fans, what does it feel like to watch your team pull out a win after a special teams meltdown? Like true end of an era type vibes right?

WHAT IS HAPPENING IN THIS GAME pic.twitter.com/xpPSao2Ea0

Justin Herbert is a god

It was a roller coaster of emotions. 😩 pic.twitter.com/o6crvB724r

Down so many defensive stars, the Steelers did a remarkable job of storming back to take the lead – Ben sure looked like vintage Ben. Only one late defensive breakdown cost them from winning what sounded like a home game at Chargers. Moral victory.

Chargers did all they could to give the game away, but managed to eke out a win.

With his 3rd pass TD on #SundayNightFootball, Justin Herbert has now thrown 53 in his first 25 career starts

Austin Ekeler has 4 total TD tonight for the Chargers after Jonathan Taylor had 5 total TD earlier for the Colts.

This is the 7th time since 1950 that multiple players scored 4+ TD on the same day. The last time it happened was 2007, when Randy Moss and Terrell Owens did it. pic.twitter.com/LnRXJQzba7

The Chargers' Austin Ekeler is the 2nd player since the 1970 merger with at least 6 Rush and 6 Rec TD through his team's first 10 games.

The other was Kareem Hunt for the 2018 Chiefs. pic.twitter.com/H1yU5k6vXM