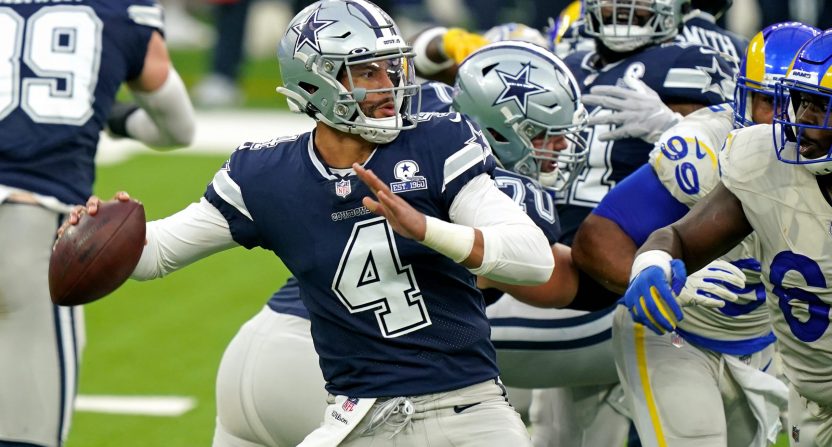 Dak Prescott, the subject of so much offseason consternation and debate, lost to the Los Angeles Rams 20-17 in Week 1. He didn’t play badly, completing 25-of-39 passes for 266 yards and a touchdown, but the game will fuel more passionate debate about his worth as a quarterback.

In part because he plays for the Dallas Cowboys, Prescott is one of the most polarizing players in the NFL. He can be a difficult player to evaluate and debate because of the perception that he struggles to win. He has no recent signature moment — no instance where he dominated in front of a national audience or led a spectacular game-winning drive. Last year’s curious 8-8 record, in which Dallas failed to make the playoffs out of the dismal NFC East, lined up further doubters.

That Prescott declined a lucrative contract extension in the offseason led fans to criticize him for overestimating his own value. Expectations have skyrocketed, even though his leverage remains massive and he will, barring injury or significant underperformance, ultimately win the contract debacle.

He takes frequent undue criticism. In addition to the contract issue, anti-Dak sentiment stems from the perceptions people want to have about NFL quarterbacks. Fans want to feel clutchness in a quarterback, to sense it, and for many, Prescott doesn’t display those intangibles. It’s hard to see why that’s the case, given how elite Prescott has played.

In adjusted yards per attempt, one of the best methods by which to evaluate quarterbacks, Prescott was eighth last season, and he was fifth in QBR. He avoided sacks, ranking fourth in sack rate, and also avoided interceptions, with a 1.8 interception percentage. By Football Outsiders’ Defense-Adjusted Yards Above Replacement, which measures a quarterback’s production compared to a replacement player, he ranked first, directly above Patrick Mahomes, Drew Brees, Russell Wilson, and Lamar Jackson.

We could go on with the stats. He was second in yards last year and completed 65 percent of his passes. He adds value as a runner and rarely turns the ball over. Is it possible to be this good but also not be clutch? In theory, yes. In practice, there aren’t many players who seem to fit that mold. Prescott, as we’ll get to in a moment, certainly doesn’t.

The first thing you’ll hear in response to the stats listed above: he went 8-8. How could he have played well? I’ve never quite understood this line of thinking. The quarterback obviously has a big impact on winning, but he’s not the entire team. It is possible to play well and lose. Prescott, by any objective measure, played very well for the bulk of the season. Is that not what you want from your quarterback?

Of course, you want your quarterback to will his way to wins every time, particularly when there’s a talented team around him, as Prescott has had. One important thing to remember is that good performances from a quarterback usually results in wins at some point. There is, undoubtedly, a correlation between quarterback performance and a team’s winning percentage, even if it isn’t always borne out in small sample sizes (like a 16-game season).

I find it hard to believe that a quarterback can be at once very good statistically and also bad at winning, somehow. To my knowledge, there isn’t much precedent for this archetype: a player who’s good overall but fails to ultimately produce victories.

I trust that if Prescott continues to play at this level, the Cowboys will win some games. The eye test, in which Prescott frequently finds difficult windows and hits receivers downfield, suggests that he has the talent. There’s not evidence to support some lack of clutchness, or It Factor, or some other intangible. Bill Barnwell laid this out for ESPN in June, framing it as a comparison between Prescott, Carson Wentz, and Jared Goff:

Prescott isn’t Tom Brady in important moments, but he’s far from bad. He has put the Cowboys in position to win numerous games only for external factors to kill their chances. Take their 28-24 loss to the Vikings last year, which Barnwell mentions. Prescott drove them to the red zone late in the game, only for Ezekiel Elliott to lose a combined three yards on two misguided rushing attempts. The drive petered out and Dallas had to throw a hail mary. There were other instances in which the kicking game failed them, or Jason Garrett made a coaching mistake.

The Cowboys went 8-8 last year in part due to variance factors, which should turn around this year. They were 0-5 in close games a year after going 8-2 in such games. Usually, a team that struggles in close games in one season reverses that record the following year, or at least improves. If Prescott weren’t clutch, the Cowboys wouldn’t have gone 8-2 in close games in 2018.

Too often, debates over athletes devolve into winz discussions (a cousin of ringz discourse), in which a player is reduced to their team’s win total. Even if they objectively performed well, opponents say they “didn’t do enough to win” or some other variant. Why do we have to do this? If a player played well, they played well.

It’s another thing if the player failed to come through in a big moment in the game. I don’t doubt that some players are more clutch than others, or fare better in important situations. That trait is justifiably used often in evaluating and ranking players. But Prescott is, at the very least, not noticeably unclutch. His fourth quarter stats are good. He’s 40-25 overall in his career, which is, uh, pretty good. Certainly, there are games one could cherry pick that would showcase his failures. There are games in the other direction, too.

Every player has successes and failures. Even Brady, the football paradigm of clutchness who rarely doesn’t come through, has games or moments in which he fails. This is a fact of sports.

Not every game is black and white. For example, look at this past Sunday. Prescott played well for most of the game, until a couple of second half drives in which the Cowboys offense stalled. They went for it, boldly and correctly, on a fourth-and-three at the Rams’ 11-yard line down by three early in the fourth quarter. CeeDee Lamb ran his in-route too short and was tackled a yard shy of the marker. On the final drive, Prescott hit Michael Gallup with a beautiful pass for a 47-yard gain, only for Gallup to get hit with an offensive pass interference penalty.

Prescott missed a couple of throws and failed to drive his team down the field consistently at times. But he was doing this against a Rams pass rush that was weaponizing the best player in the NFL, Aaron Donald, and beating Dallas’s talented offensive line. Too often, the Cowboys put Prescott in tough situations by running Elliott on early downs, creating third-and-longs. In addition, Greg Zuerlein missed a 53-yard field goal.

Is there something wider about Prescott’s intangibles and clutchness to take from this Week 1 loss? I would find it hard to draw those types of conclusions. Perhaps a higher-caliber quarterback, in the Mahomes-Wilson-Jackson-Deshaun Watson tier, would have done a bit better than Prescott. At the same time, there were factors that worked against him, and would work against any QB. That is the case in every game, and as much as we would like to believe the quarterback has complete control over the outcome, he never really does.

It’s hard to argue against the assertion that Prescott is an above-average NFL quarterback, at the very least. He performed better than almost anyone last year despite the Cowboys’ record. If there was some clear pattern of Prescott being unable to come through in the fourth quarter or produce wins, I would think differently about him. There isn’t, though. He doesn’t have a track record of choking, and he has won a lot more games than he has lost in the NFL.

Dallas’s defense was 16th in DVOA last year, per Football Outsiders, and their special teams was 30th. Their struggles in close games will almost certainly progress to the mean this year. Until there’s evidence that Prescott’s quality performances are somehow preventing Dallas from winning games, he’s a member of the NFL’s elite.