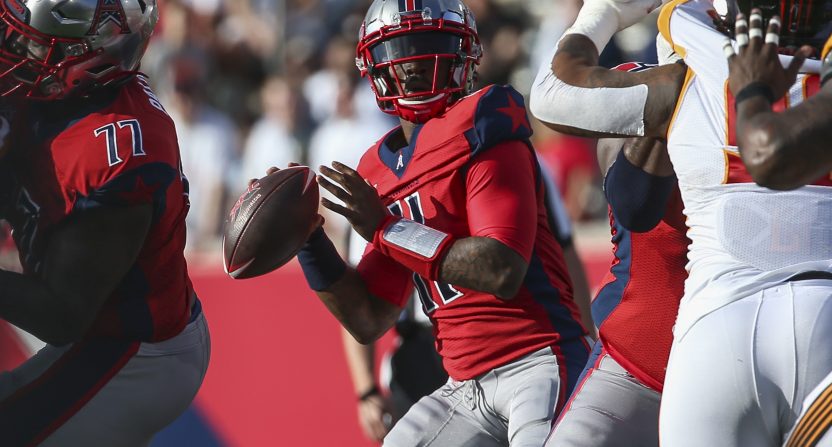 Despite a shortened inaugural XFL season, some players broke out and caught the eye of fans and media. A few apparently caught the eye of the NFL which is what happened to Houston Roughnecks quarterback PJ Walker.

According to ESPN’s Dianna Rossini, the Carolina Panthers have signed the QB after he ended the 2020 XFL season a perfect 5-0. Rossini revealed that the Seahawks and Cardinals were also interested in Walker.

Walker had been one of the breakout stars of the XFL. A Colts practice squad QB from 2017-19, Walker signed with the XFL and was placed with Houston in order to get playing time. Walker put up some pretty good stats in his five game season, ending with a 65 percent completion percentage, 1,338 passing yards, and 15 touchdowns with four interceptions. Panthers head coach Matt Rhule was Walker’s coach at Temple and according to Rossini, they stayed in touch weekly and Rhule watched his XFL games.

This was something the XFL wanted, to be a league that provided opportunities to football players who may have been overlooked by the NFL for one reason or another. Take Walker for example. You can only show so much being stuck on the practice squad and while that’s still the NFL, it’s difficult to make yourself known to lots of people. The XFL doesn’t have the kind of quality players as the NFL has but it was national exposure for lots of players who still might have something to provide for an NFL team. A practice squad player, while playing tougher competition, can only showcase himself to one team. An XFL player could showcase himself to all 32 teams at the same time while playing in a full game atmosphere. And now that players like Walker are being signed by NFL teams, that makes the XFL a more attractive option for other players eyeing an NFL dream (if there is an XFL next year).

Walker joins a rather full corps of quarterbacks in Carolina. The team just signed Teddy Bridgewater last week and technically still have Cam Newton even though they’re bound to either trade or release him. But with Kyle Allen and Will Grier also on the team, it’s going to be a very competitive QB battle in the summer.