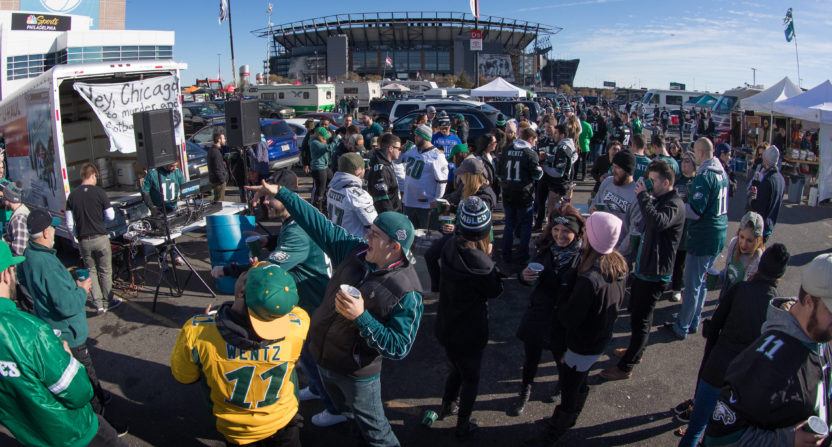 Due to the rise in COVID-19 cases, the City of Philadelphia announced that all large public gatherings would be canceled through February 2021. While Pennsylvania hasn’t seen the massive jumps that other states have recently seen, the state is trying to keep it that way by being proactive instead of reactive (something not done in many states).

The mandate noted that while public gatherings would not take place, “private outdoor events with fewer than 50 guests, such as weddings and family picnics; to recreational sports with fewer than 25 participants; or events on private property” would not apply. Those exemptions don’t include events that take place in Lincoln Financial Field and Citizens Bank Park, facilities owned by the City of Philadelphia.

After it was initially understood that the Eagles would be exempt and have fans, city officials put cold water on that dream and said that they preferred fans not attend games.

Philadelphia Health Commissioner Thomas Farley told The Philadelphia Inquirer, “I do think that games can be played with the kind of safety precautions that they’re proposing. I do not think that they can have spectators at those games. There’s no way for them to be safe having a crowd there. I can’t say what the plans are for the league, but from a safety perspective, they can play games but not [have] crowds.”

Managing Director Brian Abernathy reiterated Farley’s stance by also including the Phillies. Even though officials didn’t definitively say fans can’t attend games, it’s what they would like to see and they have the power to enforce that. The Flyers and 76ers, if they start their 2020-21 season at their own arena before next February, will be exempt because Wells Fargo Center is owned by Comcast Spectacor.

The NFL hasn’t fully revealed their plan on fan attendance but teams are beginning to reveal their own strategies. Last week, the Baltimore Ravens revealed that they would fill M&T Bank Stadium at no more than 20 percent capacity as long as government officials allowed that many people to attend. The Eagles haven’t responded to the idea of fans not being able to attend games but they have changed the Eagles Autism Challenge, set for February 28, into a virtual event and fundraiser.

One thing that is unknown is the parking lots around those respective stadiums, as well as nearby Xfinity Live! If those locations are privately owned and don’t apply to the mandate, then fans could tailgate games and defeat the purpose of keeping fans from attending games and having a large public gathering in the first place.