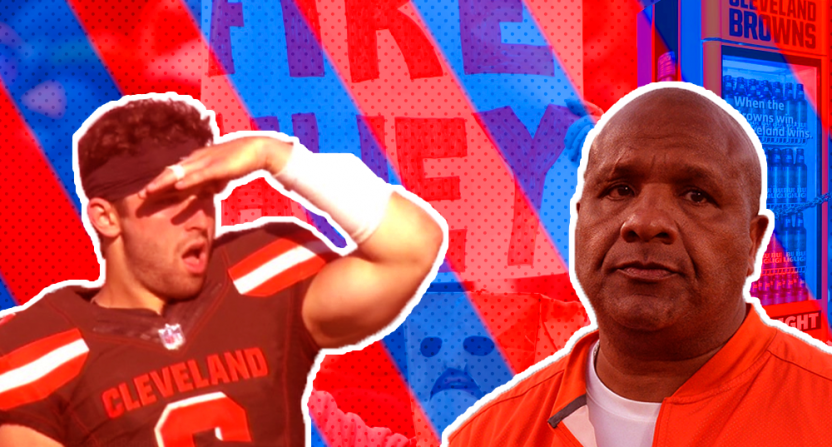 Hue Jackson is out as head coach of the Browns, much of the shock of…well, no one. His .088 winning percentage as head coach is really bad. One time, my friend bet I couldn’t make 10 half court shots out of 100. I did. In fact, I made 15. Basically, the Browns under Hue Jackson had about half the chance to win as I ,a stocky, out of shape, non basketball playing dude, did in making a half court shot. Obviously, that’s not good.

But it wasn’t ALL bad for Jackson and the Browns, and with that in mind, let’s take a moment to relive some of the high points of Jackson’s tenure as head coach of the Browns.

With a decent kicker, the Browns would have been 2-0, but instead found themselves 0-1-1 going into Week 3’s matchup with the Jets, still feeling the weight of their 19 game winless streak. This was bad for everyone involved except Anheuser-Busch, who had chained up fridges of Bud Light that would unlock following the Browns’ first victory. The first two weeks of the season had sown doubt that the beer would be drinkable if and when the Browns would finally win a game, but let’s be honest – you’re not drinking Bud Light because it tastes great.

In front of a home crowd and playing a weak opponent, this looked to be as good of a chance for Browns to log a win for the first time in 635 days. However, the Browns trailed 14-0 late in the second quarter and starting QB Tyrod Taylor was knocked out of the game. It looked like all of that Bud Light was going to remain an unobtainable adult beverage for Browns fans.

But the Taylor injury turned out to be a blessing in disguise, because Baker Mayfield made his debut and led four scoring drives. Meanwhile, the Browns defense grew more stout and only gave up three second half points. The Browns ended their winless streak and, for the first time in a long time, the franchise seemed to have a feeling of optimism about the quarterback position.

The Browns hadn’t won in more than a year. They were on the verge of an embarrassing 0-16 season, but you can’t hold down a good coach forever. Jackson’s Browns trailed at halftime to the high octane 5-9 Chargers. The cold weather in Cleveland in December served as the perfect backdrop for the Browns to finally unleash the second coming of Robert Griffin III, who was sacked seven times on the day. Rookie sensation Cody Kessler was also called upon and added eleven passing yards to the dynamic offensive performance, while also taking two sacks.

But the nine sacks were overcome by big days from Gary Barnidge, who led the way with 42 receiving yards, and Isaiah Crowell, who shredded the Chargers’ defense for an otherworldly 54 rushing yards. Ultimately, a turnover free game and a late missed Chargers field goal brought Browns fans an early Christmas gift and gave Jackson his first signature win.

Riding high with a 1-2-1 record, the Browns were seeking Mayfield’s first win as a starter and Jackson’s third regular season victory. It wouldn’t come easy as the Baltimore Ravens were coming to town.

A Browns missed FG and PAT, coupled with a late Justin Tucker FG, pushed the game into OT, where both teams struggled to mount much offense. The Browns received the ball with just over two minutes left in overtime and immediately found themselves with a 2nd and 21 on their own five yard line after a negative eleven yard running play. The Browns would go onto pick up positive yardage on four out of the next five plays, and inexplicably found themselves in field goal range. Jackson dug deep into his bag of coaching tricks and attempted a field goal in the closing seconds for his second win of the season.

The Browns’ record was evened out at 2-2-1 and the future seemed bright with a rookie QB on the rise and a head coach who had seemingly found his groove after an extended period of growing pains. Little did we know the Jackson era would come to a grinding halt less than a month later. Now, the Browns will have to scramble to find the leadership and schematic genius that Jackson brought to Cleveland.

A shutout on the road? Look at you, Hue Jackson. Despite being a preseason win, it finished off an undefeated preseason for the Browns, who looked ready to continue that dominance going into the regular season. Spoiler alert: they didn’t.

After going winless in the 2017 regular season, this win reinvigorated the Browns faithful with optimism that 2018 would see the Browns return to the land of championship contenders. Matthew Dayes led the team with thirteen yards rushing.

And DOWN go the reigning champs, evoking memories of Mike Tyson vs. Buster Douglas. The defending Super Bowl champions were stymied all night as the Browns defense registered a safety and the offense in turn helped the cause by logging a second quarter field goal. With the Browns’ shutdown defense, that’s really all you need.