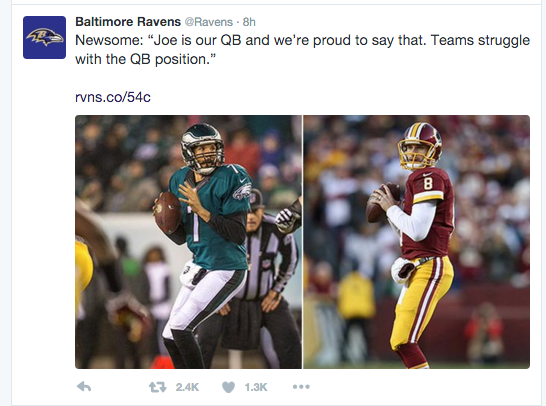 Kirk Cousins is clearly the present and future of the Washington Redskins — to the tune of a franchise tag that was accepted by Cousins on Wednesday night. So, don’t go Tweeting shade at Cousins or the Redskins are going to fire back.

At least that seems to be the lesson of today’s NFL Twitter feud of the day.

It all started with a tweet from the Ravens about Joe Flacco’s future as the quarterback of the franchise. You know, since Flacco just signed a long-term contract extension and all. But, GM Ozzie Newsome apparently had a thing or two to say about quarterbacks across the NFL.

Newsome: “Joe is our QB and we’re proud to say that. Teams struggle with the QB position.”https://t.co/yv3AzzK56n pic.twitter.com/DTxBGflZe2

One of these things is not like the other — and hint…one of them made the playoffs this past season.

Struggling at QB and the Washington Redskins don’t belong in the same sentence after Cousins led the team to the NFC East division title and a berth in the NFC playoffs this past season. He also just so happened to finish the season completing 69.8 percent of his passes for 4,166 yards and 29 touchdowns to 11 interceptions.

Needless to say, the Redskins were none-too-happy about the innuendo of the pictures in the tweet from the Ravens and responded back quickly.

Baltimore tried to end it with an apologetic tweet…

@Redskins Our bad. Ozzie didn't criticize. We should have used pictures of Joe.

Maybe the picture was a coincidence and a mistake from the Ravens, but they sure can’t explain away the fact that Newsome threw Cousins under the bus in announcing Flacco’s long-term deal:

“Philly signing [Sam] Bradford and Washington having to put the franchise tag on [Kirk] Cousins [are examples]. They don’t have the résumé that Joe has, and for us to be moving forward with a guy that has eight years and won a Super Bowl and been in three AFC Championship Games, it speaks volumes.”

Those are pretty unmistakable words, but sure Baltimore Ravens…we’ll believe your Twitter apology.