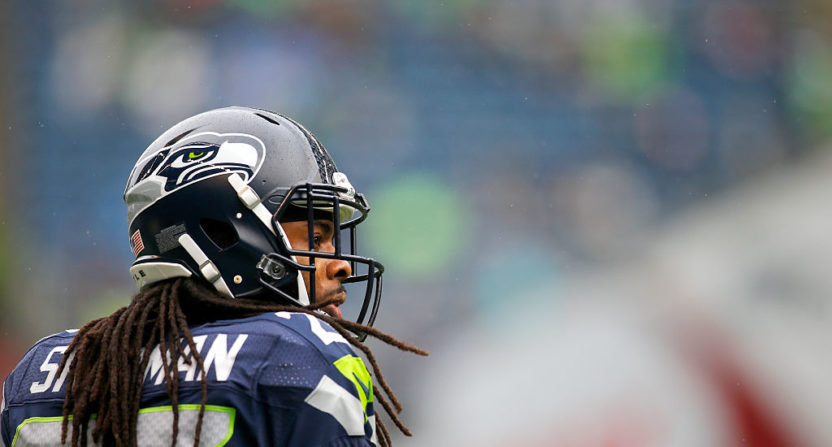 After Seattle finished off their blowout win over the Colts on Sunday Night Football, Richard Sherman spoke out about what he perceives to be a major problem with sports in general: the fans and their perceptions of athletes.

In the wake of a particularly gruesome injury suffered by Seahawk running back Chris Carson, Sherman brought up fantasy sports, and how he views it as a catalyst for the dehumanization of players in the eyes of fans:

Sherman called injuries to teammates “devastating” and lamented how some fans only view them through the lens of fantasy football.

“Now, your fantasy team may not win, and hey, guess what, you’ll live the next day. This is their well-being. They may not ever get another shot. They may never get another down, another play. And I think that’s why it’s so devastating for players. Thankfully, I don’t think [Carson’s injury is] as serious as we first thought, hopefully, God willing. Trying to be optimistic in this situation.”

First, let’s note this: Richard Sherman isn’t wrong! He’s also not expressing these thoughts for the first time; it comes just a few weeks after he pointed out that injury reports were just for gamblers.

People do generally care way more about the impact of injuries to their fantasy team than they care about the impact on the players themselves. And while there’s always going to be a disconnect between your level of empathy for a friend who gets hurt and the empathy you feel when seeing someone get hurt on television, the disparity between those two is much larger in sports than it should be.

Has fantasy football exacerbated that disconnect? Almost certainly, because it’s allowed fans to assume the roles normally occupied by the league itself: having money at stake based on the performance of the players. That’s gone on forever now, of course, in the form of sports gambling and wagering, but fantasy sports has shrunk things down to an individual level, which probably has further eroded fan empathy.

However, go back to pre-fantasy football, and gambling still caused that. And even fans with no money on the games, who just want their teams to win out of a sense of passion and loyalty, are likely to care more about the result of a game than a player’s well-being. And the teams, owners, and the NFL as a whole have certainly made it clear they value the sport’s growth and revenue-generating potential over any kind of concern over player health.

Just about everyone in the sports world dehumanizes the athletes to some degree. It’s been going on for a very long time, and will continue as long as sports are around.

Richard Sherman is right, but he didn’t go far enough.