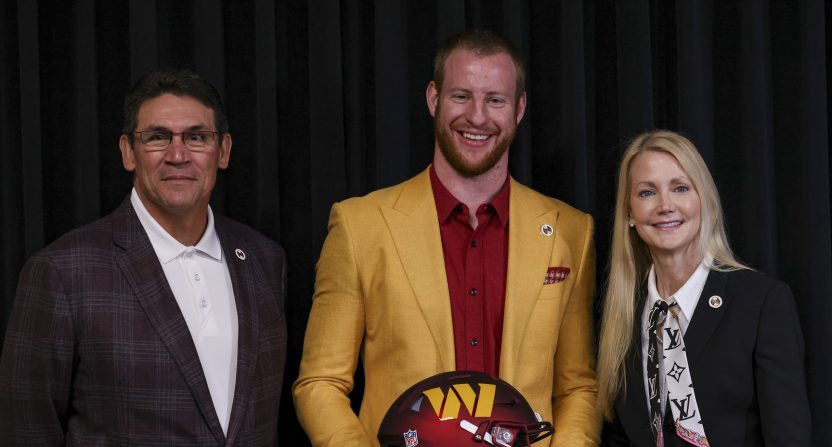 So far, so good for Carson Wentz and the Washington Commanders. The former Indianapolis Colts and Philadelphia Eagles quarterback is making quite the impression on his coaches in minicamp this week.

Head coach Ron Rivera says he likes how his new quarterback has command of the offense, amongst other things.

Ron Rivera on Carson Wentz: "I really like his command of the offense."

(I don't believe a pun was intended.)

Coach Rivera on Wentz as an impact player..

"I really like his command of our offense .. it gives me confidence." pic.twitter.com/Sqt7GWBpvJ

Carson Wentz doesn't "have enough mental space" to pay attention to all the outside takes about him. "It wears on you"

Wentz was criticized heavily for struggling at the end of the season with the Colts, losing to the Jacksonville Jaguars in a must-win season-ending game. That appeared to be the final straw in what led to Wentz ending up in Washington.

Wentz only lasted in Indy for a year after he was traded from the Eagles when Philly decided to go with Jalen Hurts. Despite having a pretty good defense last year, the Commanders struggled mightily on offense, averaging about 19.7 points a game.

“He’s a hard worker. He’s smart, he’s instinctual, he catches the football as naturally as anybody I’ve been around.” pic.twitter.com/Pwq9FWWMy9