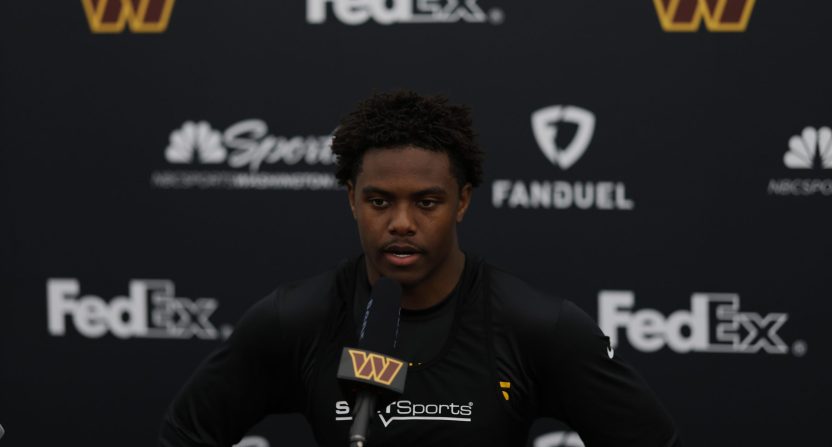 When you’re a pro athlete, it’s important to be focused and dedicated to the sport you’re playing in but it’s also great to figure out a healthy balance and maybe realize that some things are more important than sports.

Washington Commanders head coach Ron Rivera understands that and when first round receiver Jahan Dotson was prepared to skip graduation in order to attend rookie minicamp, Rivera told him to go to Penn State and accept his diploma in person.

Commanders first round WR Jahan Dotson is set to graduate from Penn State tomorrow – a huge moment for him and his family. But with Washington in rookie minicamp, he was planning on skipping graduation.

Until coach Ron Rivera urged him to attend.

Dotson returned to State College on Saturday to accept his degree in telecommunications.

Dotson said, “I was actually ready to skip the graduation and be out here at practice. But [Rivera] said that’s a once in a million type of thing. He was all for me going, so I honestly hadn’t even thought about skipping practice until he kind of brought that up.”

You can tell graduating college is important to Dotson but he was willing to sacrifice that in order to hit the ground running with his new team. Most pro coaches would go along with that and while I’m sure Rivera is appreciative of Dotson’s work ethic, it was good of him to let Dotson go and have an unforgettable experience.

In a week, Dotson went from NFL draftee to college graduate. He tweeted his appreciation for the opportunity to achieve some major milestones in his life.

Can’t even explain how blessed I am. Constantly thanking the man above. 🙏🏾 pic.twitter.com/BMp6tQfUxT