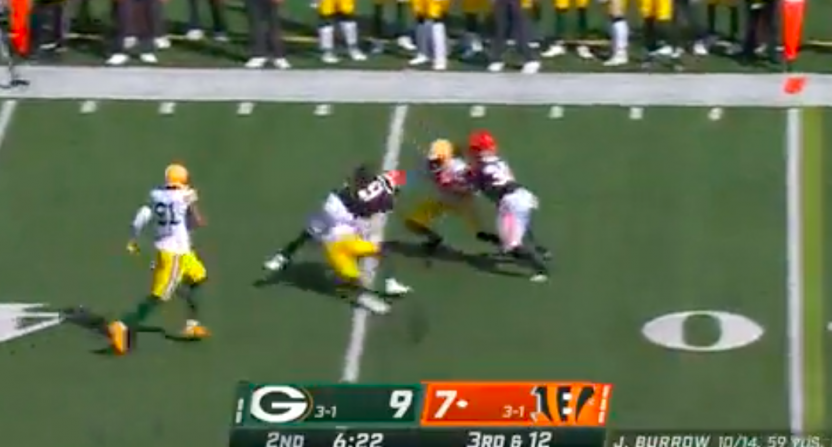 For a moment there, it looked like Cincinnati Bengals quarterback Joe Burrow‘s day was over.

The Bengals trailed the Green Bay Packers 9-7 in the second quarter on Sunday when Burrow was flushed out of the pocket and scrambled to his left. He was able to pick up some solid yardage before two defenders converged on him. Instead of sliding, Burrow dove for some extra yards and ended up taking a brutal shot from Darnell Savage, compounded by his head hitting the ground right after.

This did not look good for Joe Burrow. pic.twitter.com/68KXVuACKl

Burrow laid there for some time, scaring the heck out of Bengals fans and NFL fans in general. However, he did get up his own accord and walk over to the medical tent.

Joe Burrow popped back up and jogged off on his own power. He's headed to the blue tent for further evaluation. https://t.co/ej6WFJyzw0

Apparently, they didn’t see any signs of a concussion or major injury, because he was right back out on the field as time ran down on the first half. Now down 16-7, Burrow helped narrow the gap by launching a pass to Ja’Marr Chase downfield, which he then hauled in for a 70-yard touchdown.

Joe Burrow was cleared to return after taking that brutal hit… and threw a 70-yard touchdown pass to Ja'Marr Chase. pic.twitter.com/Aec1jRNMhv

Hopefully, we won’t hear about any long-lasting effects from the hit, aside from the fact that it looked like it really, really, rung Joe’s bell. But that he was able to come back and orchestrate a touchdown play like that proves he’s still got his wits about him.