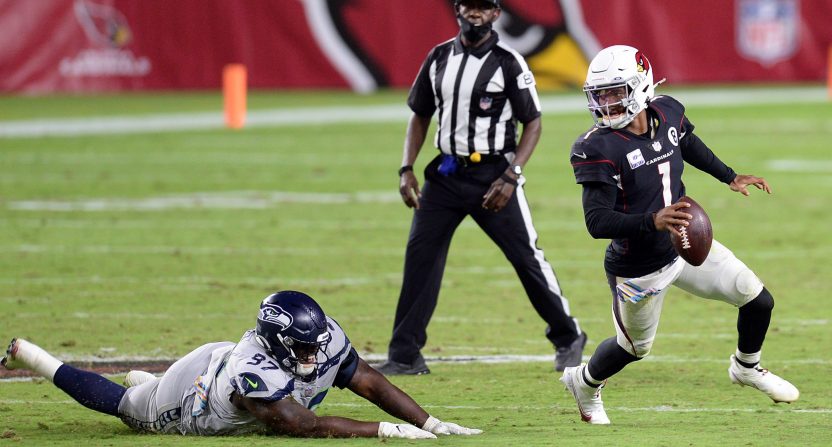 The Arizona Cardinals took down the Seattle Seahawks with a 37-34 overtime victory in a completely bonkers Sunday Night Football game. Here are our main takeaways from the Cardinals’ win:

Goodness, the fourth quarter and overtime were wacky

The Cardinals never led this game until Zane Gonzalez’s game-winning 48-yard field goal with 15 seconds remaining in overtime, and they trailed by 13 points twice.

In the fourth quarter, Arizona trailed by 10 and had a drive taking up way too much clock, before finally scoring a touchdown with 2:28 remaining. This touchdown came after the Seahawks were called for a penalty on an Arizona field goal.

Questionable clock management all drive, and bailed out by a Seahawks penalty on a field goal, but the Cardinals get a TD to get within 3 with 2:28 remaining. #SNF pic.twitter.com/TVIfr9diNG

With two seconds remaining in regulation, Gonzalez made a 44-yard field goal to send the game to overtime.

And once it got to overtime, the craziness went up a notch, particularly in the final three minutes. With 2:42 to go in overtime, Gonzalez missed (his first attempt at) a game-winning field goal try from 41 yards out.

On the ensuing drive, D.K. Metcalf appeared to have a walk-off touchdown for the Seahawks, but it was called back due to holding.

Game-winning TD for the Seahawks!

Just kidding, called back due to holding. pic.twitter.com/aayDdFDl3Z

And on the next play, Russell Wilson threw his third interception of the game, to set up the Cardinals’ game-winning drive with under a minute remaining.

And immediately followed by an interception. This game is drunk. pic.twitter.com/PAwe210qdM

The game was full of great plays, but also big miscues and missed opportunities from each squad. The finish summarized that perfectly.

It’s going to be a lot of fun watching these two have shootouts for many years. Wilson entered this game as the NFL MVP favorite, but those chances took a hit with a three-interception performance on Sunday night. A pick-six would’ve been included if not for an absolutely incredible chasedown tackle by D.K. Metcalf following a Wilson goal-line interception.

Wilson’s second interception came while the Seahawks were in field goal range in the fourth quarter, so that ended up being a huge play.

Russell Wilson is picked off for the 2nd time tonight. Patrick Peterson with the good footwork to get this interception in the end zone. #SNF pic.twitter.com/px3cY8eeq6

On the other side, Murray showed why he was the No. 1 overall pick of the 2019 NFL Draft. The second-year quarterback completed 34-of-48 passes for 360 yards, three touchdowns, one interception, and a passer rating of 104.5. He showed off his tremendous arm talent.

Kyler Murray and DeAndre Hopkins for the long TD. We'll be seeing a lot of this in the coming years.

(Yet another "What were you thinking, Bill O'Brien?" moment) pic.twitter.com/lI8hlyIVDr

And he also showed off his ability as a ball-carrier, with 14 carries for 67 yards and a touchdown.

This is just a ridiculous effort on a touchdown run by Kyler Murray. It certainly helps when your quarterback can do this. #SNF pic.twitter.com/iOZqN6jYZp

Chase Edmonds was terrific down the stretch

Arizona starting running back Kenyan Drake was carted off with an ankle injury, but the Cardinals have an excellent second running back in Edmonds. Many evaluators have suggested that Edmonds may even be the better back, and you can understand why that’s a real argument after his performance in this one. Edmonds didn’t get a carry until the fourth quarter, but finished with five carries for 58 yards (11.6 AVG), to go with seven receptions for 87 yards.

If Drake has to miss time, the Cardinals will still be in very good hands with Edmonds, who has the makings of a top-10 fantasy running back with his all-around skills in an explosive offense.

An amazing Tyler Lockett night lost in the shuffle

Lockett certainly deserved a better result in this one. The Seahawks’ wide receiver had a ridiculous stat line, with 15 catches, 200 yards, and three touchdowns. And these receptions weren’t cheapies; many of them were remarkable, hugely important plays.

Russell Wilson and Tyler Lockett for the 💣AGAIN. Incredible. pic.twitter.com/9xd756nsIw

Tyler Lockett. What a night. pic.twitter.com/e0hdFxCuua

At the very least, he won a lot of games for fantasy teams.

While the Seahawks had a 10-point lead in the third quarter, NBC color commentator Cris Collinsworth said, “If Seattle doesn’t make it to a Super Bowl this year, the reason’s gonna be they can’t rush the quarterback. I mean, they’re giving Kyler Murray *all day*… they just desperately need a signature guy.”

A graphic on the broadcast proceeded to show how the Seahawks entered the game dead last in quarterback pressures generated on dropbacks, at 20.8%. And as Collinsworth alluded to, it’s hard to imagine that those numbers got any better after this game. Seattle finished the night with zero sacks and zero quarterback hits- and keep in mind that this game went into the final minute of overtime. The Cardinals didn’t get a sack until overtime themselves before getting two, but they had at least nine hits on Russell Wilson to disrupt his passing and comfort in the pocket. The Seahawks did none of this on Murray, and even while he’s an incredible athlete, a pass-rush should be causing more trouble for a second-year quarterback.

Seattle almost got to 6-0 in this game, and they’ll usually be able to outscore teams regardless of their defensive play. But it’s hard to sustain that kind of success all season, especially to get deep into January, when all of these offense can perform like the Cardinals or even better. If the Seahawks can’t put any pressure on the likes of Aaron Rodgers, Tom Brady, and Patrick Mahomes in the postseason, it will be really hard to run the table. So, expect the Seahawks to look hard at adding a pass-rusher by the Nov. 3 trade deadline.

Above all, an absolutely huge win for the Cardinals

The significance of this victory for Arizona can’t be overstated. This is a statement win, and the kind of victory that can bring a lot of confidence to the entire organization. And it tells them that their young franchise quarterback can win the big primetime games against great teams.

It’s not just a statement win either; it’s a highly valuable win for the Cardinals’ NFC West and Wild Card hopes. Kliff Kingsbury’s squad is now 5-2, just a half game behind the Seahawks in the NFC West. Had they lost this game, their NFC West title hopes would’ve been tiny.

Now, the Cardinals are right there in the division race, and if they were to beat Seattle in the second meeting (Nov. 19), they would hold the tiebreaker. All of a sudden, there’s truly a realistic path to the Cardinals being division champs. And at the very least, their chances at a Wild Card berth are looking strong (they would be the No. 6 seed at the moment). Keep in mind that with the NFC East getting to host a postseason game, the No. 5 seed will get to face the winner of that division, so that playoff slot will be as coveted as any but the No. 1 seed (the only bye in the new NFL playoff format).