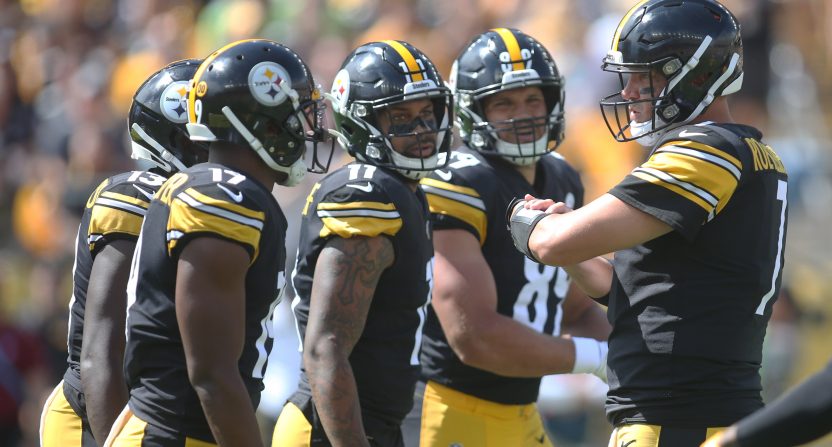 Other than the Patriots, the Pittsburgh Steelers have been one of the most consistent NFL teams over the past 20 years. In the new millennium, the Steelers have made the playoffs 12 times and only finished below .500 once.

Coincidentally, the year the Steelers finished 6-10, they drafted Ben Roethlisberger. After two Super Bowl wins and an additional appearance, the rest was history for the Black and Gold.

Today, things in Pittsburgh are different. During the 2017 season, the Steelers arguably had the best QB, RB, and WR in the NFL. Since then, Le’Veon Bell held out for more money and signed with the Jets. Antonio Brown and Roethlisberger couldn’t be in the same room together, so Brown was traded to the Raiders until he was able to pull a George Costanza and get himself fired from Oakland so he could sign with the Patriots. And Roethlisberger, the 37-year-old who has been hit so often he’s on pace to break a record for most times sacked, is now out for the season after requiring elbow surgery.

This was the perfect time for the Steelers to realize that this isn’t the year to go for the Super Bowl. The Patriots are on pace to go 16-0 and other than maybe the Chiefs, there isn’t really any other team who could knock them off for their seventh ring.

Maybe it’s because they haven’t had experience losing that often, but the Steelers are already betting big on Rudolph, who played his first game on Sunday. Rudolph was solid, especially in a game where he wasn’t expecting to play, but betting on him after playing one half is like going all in on a pair of deuces. It’s a great starting hand and you might be confident at first, but it’s difficult to improve that hand and you can easily be beat by other hands.

This denial from the Steelers the team is anything but a playoff team is delaying an inevitable rebuild that will need to happen at some point. On its face, obtaining Fitzpatrick was a great move. Fitzpatrick was a mid-first rounder last year and the Steelers need help in the secondary, which seems to be a popular saying around Pittsburgh since Troy Polamalu retired. The problem is the Steelers’ timing to make this move.

Not only did the Steelers trade a first round pick, they traded what is likely to be a first round pick in the top half of the draft. And maybe I’m overselling the pick, but at the rate the Steelers are going, that pick might end up being in the top five. And they traded that pick for someone who publicly requested a trade, usually indicating that the team trading the player is in a weaker position in negotiations. But given multiple teams were after Fitzpatrick, the Steelers shot high and the Dolphins weren’t turning down that deal. This was a “win now” trade for a team who isn’t even going to make the playoffs.

That first round pick could’ve been a defender. It could’ve been a wide receiver to replace the endlessly dropping Donte Moncrief. And it also could’ve been a high ranking quarterback if, after 14 games, the Steelers realized Rudolph wasn’t going to be the QB they thought they had. Before the Fitzpatrick trade, that first rounder represented flexibility for a team who needed to fill many spots for their future.

Now, they’ve already made their bed for next season in Week 3, and are either pinning their hopes on an unproven Mason Rudolph, who has played one half of one game so far, or on a 37-year-old Ben Roethlisberger who will be coming back from elbow surgery next season and still believes he can play forever. After looking out at the rest of AFC North and seeing Lamar Jackson (who would’ve been perfect in Pittsburgh) in Baltimore and Baker Mayfield in Cleveland, it might be a while for the Pittsburgh Steelers to get back to their winning ways.