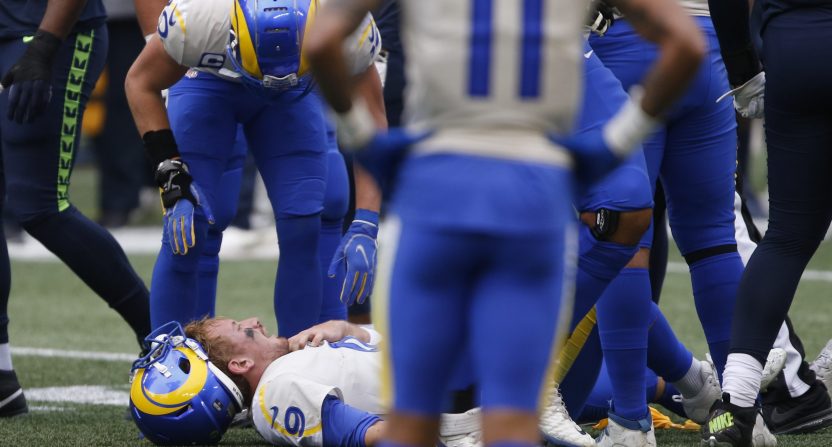 Thanks to the hard charging running of Cam Akers and a massive pick six from Darious Williams, the six-seed Los Angeles Rams scored a massive upset over the third-seed Seattle Seahawks in the NFL Playoffs.

The Rams may have gotten the win and their playoff lives are extended for another week but how they got there resulted in multiple injuries to key players that might make an already difficult situation even more difficult.

The scariest looking injury happened to quarterback John Wolford early in the game. Diving head first on a QB draw, Jamal Adams lowered his shoulder and hit Wolford in the head. Wolford was down and was transported by ambulance to a local hospital. While it looked bad, Rams head coach Sean McVay revealed that Wolford came back from the hospital and was “smiling,” believing that Wolford suffered a “stinger.”

In came Jared Goff, who is the regular starting QB. But given he just had surgery on a broken thumb on his throwing hand, Goff was backing up Wolford and entered the game. Thankfully, Goff didn’t further injure his thumb and still prevailed with the win despite a rather mediocre game.

After Wolford went down injured, more Rams players were taken out. Offensive lineman David Edwards suffered an ankle injury and linebacker Leonard Floyd was evaluated for a concussion. Floyd returned to the game and registered a sack on Russell Wilson.

Next on the injury list was defensive tackle Aaron Donald. Donald sacked Wilson but in the tackle, he injured his ribs and didn’t return to the game.

And then if that wasn’t enough, wide receiver Cooper Kupp suffered a non-contact knee injury late in the game. NFL Network’s Mike Garafolo reported that Kupp suffered a knee contusion but is expected to be fine.

That is a lot of people getting injured in a single game, especially so many important players to the Rams. Some of them seem to be fine but we probably won’t know the extent until later in the week.

Either way, this is a tough blow to a Rams team who needs everyone at full strength for next week. The Rams got past their NFC West rivals but they will have a bigger test next week. The Rams will likely play the Packers, who are on a bye. If the Bears upset the Saints, then that makes things interesting as the Rams would play the winner of the Buccaneers and the Washington Football Team.

Even if they play a fresh Packers team, there’s hope the Rams can get to next week with many of these injured players back. Wolford has been a delightful surprise but even if he can’t go, Goff was able to play when needed. Edwards’ situation is unknown but Floyd came back by the end of the game. And while Donald’s situation is unknown, there’s optimism about Kupp.

If the Rams can work through these injuries and stay alive, they may be the biggest surprise of the playoffs. That remains to be seen.