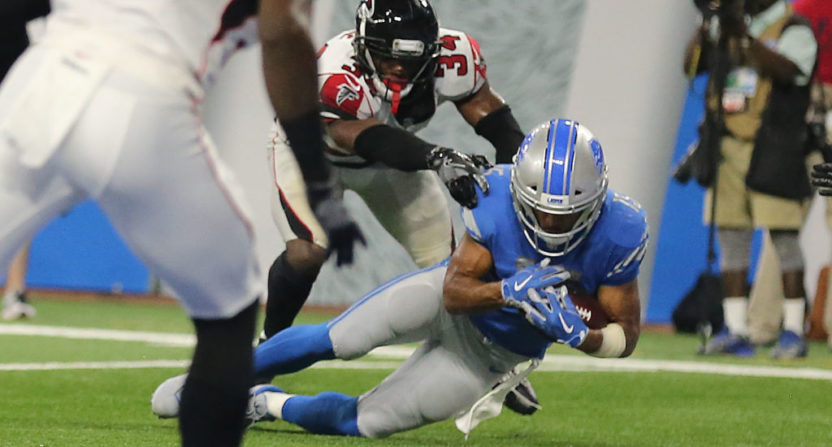 This Weekend in NFL Stupid highlights the dumbest moments and decisions in football throughout the season. And Week 3 was truly special in that regard.

While watching games throughout the weekend, I keep a log of stupid things I see in a document on my laptop. I sat down to write this after the Monday nighter between the Dallas Cowboys and Arizona Cardinals, pulled up that log and immediately became overwhelmed. I’ve been writing this column for four years and I can say with certainty that this was easily the stupidest weekend of football I’ve covered.

It was highly entertaining, but also comically dumb. And that’s not just because a large percentage of fans and right-wing pundits continue to completely misunderstand the spirit of the anthem protests that have become more present than ever. I’ll touch on that, but that’ll be just part of this rapid-fire rip through all of the stupidity that plagued the NFL in the third week of the 2017 regular season.

We could really start anywhere, but I guess we’ll go first with the highest-profile football-related moment of stupidity from Week 3.

Y’all have probably seen it by now. Down four, Matthew Stafford hits Golden Tate for a one-yard touchdown to win the game with eight seconds remaining. But an automatic replay review determines that Tate is actually down at the one-yard line. That’s questionable to begin with, considering the original call on the field was a touchdown and it’s tough to call the evidence against that indisputable. 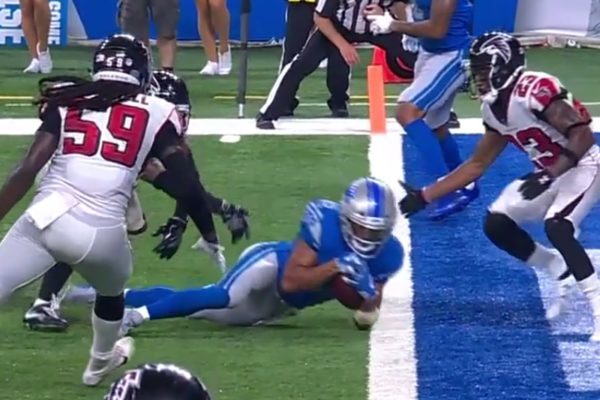 But to make matters hilariously/tragically worse, the overturn triggers a 10-second runoff since the Lions are out of timeouts. Game over. Falcons win.

The runoff rule makes perfect sense in theory, because it wouldn’t be fair to reward a trailing, timeout-less offense for a stoppage that was beyond both teams’ control.But in this case, it’s simply unfair. Working from the same line of scrimmage and in extreme hurry-up mode, the Lions likely would have had a chance to get one final snap off with a second or two remaining. Heck, as the team pointed out on Twitter, it did exactly that under even tougher circumstances in a comeback victory over the Minnesota Vikings last season.

Clock would have run out? ?

Our offense covered 27 yards to get a snap off in 7 seconds at Minnesota last year. https://t.co/GbGlprZt9U

Ergo, the stoppage stemming from a bad call by the officials probably cost the Lions one more shot at a victory from only a few inches out.

It’s this simple: With more than five but fewer than 10 seconds to play, teams should be penalized only five seconds in situations like these.

The Lions are also kinda dumb

Who throws a pass in the middle of the field and short of the end zone on 3rd-and-goal from the one-yard line with 10 seconds left and no timeouts?

Down seven points with 4:50 to play, Chargers quarterback Philip Rivers completed a short pass to running back Austin Ekeler, who had a chance to get out of bounds but didn’t. The Chargers then let 35 seconds come off the clock before the next snap. When that drive flamed out after Rivers was sacked on second and third down, they let another 31 seconds come off the clock before punting the ball away to a team they were trailing in the final four minutes.

When the Chargers got the ball back late, they had just one timeout instead of two because head coach Anthony Lynn wasted one on a completely silly challenge of a perfectly good spot on a Chiefs first down play. 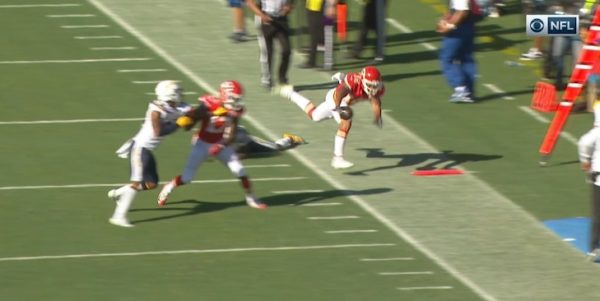 The Chargers might be the league’s unluckiest team, but what happened to them against the Chiefs was mainly self-inflicted.

Von Miller got an unsportsmanlike conduct penalty for this…

Give me a break @NFL pic.twitter.com/ItSfCnbzUy

That extended a fourth-quarter Buffalo Bills drive that essentially put the game away. Taylor was laughing, for crying out loud! Can’t let that kind of stuff impact results. Both Mike Pereira and Dean Blandino have stated that doesn’t constitute unsportsmanlike conduct. Ref show.

That’s the title of this section. Sherman might be smart, but he’s routinely stupid anyway. He’s a blowhard off (somebody tell the guy that gambling and fantasy football are a big reason he’s stinking rich) and on the field, and that cost his team on Sunday.

Sherman took three penalties on one play Sunday against the Tennessee Titans, the last of which was for unsportsmanlike conduct after he blew up in reaction to an obvious pass interference penalty. And then he followed that up with this…

Richard Sherman was trying to send Mariota back to Hawaii pic.twitter.com/CmU8iiQZtQ

O’Brien was chastised in this spot on many occasions last year, and he’s back at it. One of the league’s worst situational coaches wimped out and made a rather illogical decision as his Houston Texans were trying to put away the New England Patriots on Sunday.

Up two points with the Pats down to just one timeout and 2:28 to play, O’Brien had a chance to essentially ice the game with a first down on a 4th-and-1 at the New England 18-yard line. Converting there is historically a 50/50 shot, but it’s probably better than that when you’re facing a tired, banged-up defense and you’ve got Lamar Miller, D’Onta Foreman and mobile quarterback Deshaun Watson. If instead you settle for a field-goal attempt, you’re gambling that the kick will be successful to give your team a five-point lead and that your defense will stop one of the greatest quarterbacks in NFL history in a two-minute drill.

The Texans quite simply had a better chance to win by going for it, but O’Brien sent out the field-goal team and they left Tom Brady in need of only a single touchdown drive in two and a half minutes. The inevitable happened, and the Texans once again fell to a smarter opponent.

What is it with coaches clamming up and doing exactly the wrong thing when they have a chance to pull off upsets over New England?

Bruce Arians, not a smart coach

However, Arizona Cardinals head coach Bruce Arians might have out-dumbed O’Brien this week. Not only did he waste a timeout in the fourth quarter of a close game by challenging that J.J. Nelson caught a pass which it was blatantly clear he didn’t catch, but he later had his team punt the ball away down by 11 points with just over four minutes remaining.

The icing on the cake came when his offense ran an abysmal, Chiefs-like two-minute drill and he decided not to kick a field goal to set up an onside kick once that drill got them into range.

He later defended that decision with bad math.

On final drive, Arians said they were down too many and "you don't kick the field goal" when down that much. The math doesn't add up.

While we’re on bad challenges…

What about this made it worth challenging, Jason Garrett?

Why are coaches still so damn reckless with their second-half timeouts and challenges?

This is not offensive pass interference…

[Highlight] Trent Taylor breaks on his route so cleanly he gets called for pass interference pic.twitter.com/luHfZUPbmd

And yet it might have cost the San Francisco 49ers a victory.

Especially those in New England, who jeered the defending Super Bowl champions. Consider how much joy those guys have given you and what it is they’re kneeling for.

You might not feel oppressed, but that doesn’t mean others feel the same way. And you might view the Star-Spangled Banner as an ode to fallen soldiers, but that is also personal. Others are allowed to perceive the song differently, and they’re allowed to feel as though going down on one knee enables them to draw attention to a glaring national issue (hint: it does). Many of them still support the military and their country in different ways, and some veterans will tell you that they fought for the very right those players are exercising, rather than for a song or a piece of cloth.

Anyone under the impression that taking a knee and bowing one’s head during the anthem is wrong or disrespectful is completely failing to grasp the nuance that surrounds these protests. Criticism of these players is tone-deaf, and it reveals a certain entitlement.

Uncomfortable with these protests? Good, that’s the goal of any protest. But if that feeling causes you to lash out rather than consider the perspective of those on one knee, you might be an idiot.

And we leave you with Marcus Cooper’s Leon Lett moment

I bet Marcus Cooper had the MOST LIT touchdown celebration EVER, planned for us today. Sadly, now we’ll never know pic.twitter.com/uy7U3jbTPQ

How in the world does this happen as often as it does? What the hell are these guys thinking? Cooper might never have a chance to score an NFL touchdown again, which means he might spend the rest of his life thinking about his inability to think in crucial but easy moment.