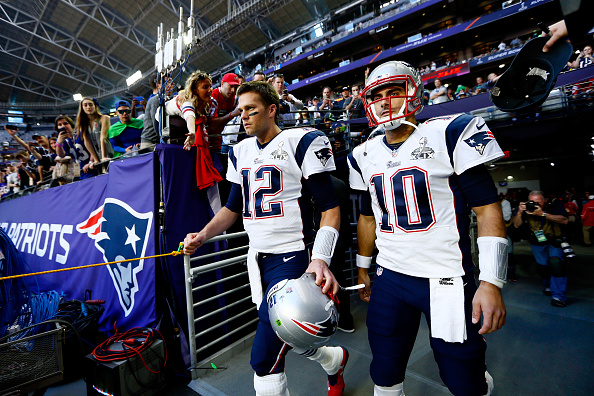 Tom Brady’s decision to drop his fight against the NFL in the two-and-a-half-year Deflategate battle means that the New England Patriots will be without their eventual Hall of Fame quarterback for the first four games of the upcoming season. For a team that has missed the playoffs only three times in the last 16 years, the four-game absence could have a major impact on their eventual win-loss record and their ability to remain in control of the AFC East.

In Brady’s place is presumably Jimmy Garoppolo, the team’s 2014 second-round draft pick who has appeared in 11 games over the last two seasons. He’s mainly seen action in games where the Patriots had very comfortable leads in the fourth quarter as well as during end-of-season contests when New England had already clinched playoff berths. He hasn’t performed badly, with 20 completions on 31 attempts for 188 yards and one touchdown, but the sample size is a small one; four full regular-season games are completely different animals than clean-up duty or a preseason stare-down against a second-string defense. 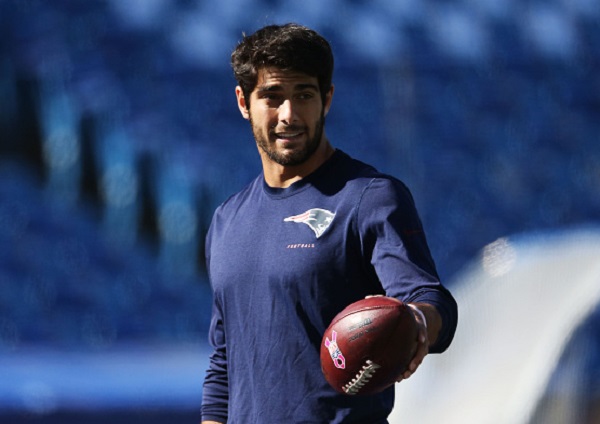 The good news is that three of the four games sans Brady will be taking place in the comfortable confines of the Patriots’ home stadium. The bad news is that two of New England’s opponents are within their division and losing both of them could be a blow to their odds of dominating the AFC East for another year.

Still, an NFL team is more than just its quarterback, and the Patriots have enough talent elsewhere to lead them to as many as three wins in that four-game span.

The first game will undoubtedly be the biggest all-around challenge the team faces in those first four weeks—a road game against the venerable Arizona Cardinals, a very good team that may only get better in 2016 after falling one game short of reaching the Super Bowl last year. Arizona has paired a high-powered offense—both rushing and passing—with a defense that is stout up front and dangerous in the secondary, a combination that is going to put pressure on Garoppolo both figuratively and literally.

While New England’s defense did a good job of bottling up opponents’ run game last year, ranking in the top 10 in rushing yards and rushing touchdowns allowed, teams also did not run against them as much as they passed—something that makes sense given the Patriots’ 12-4 2015 record and numerous games played with a considerable lead. Still, New England’s defense did rank 10th in points allowed last year. However, that defense will have to be even better than that against Arizona, whose offense led the league in yardage a season ago and ranked second in points per game scored.

Garoppolo will have many tools at his disposal—a deep and varied receiving corps again led by Danny Amendola, Julian Edelman, and of course tight end Rob Gronkowski (as well as free agent tight end addition Marcellus Bennett). Garoppolo will have to be able to get the ball out accurately for him to take advantage of his weaponry. The Cardinals are going to focus their attention on making that an impossibility, and it’s hard to see the Patriots emerging from the Arizona desert with a 1-0 record.

Week 2 is no cakewalk either, given that the Patriots play host to the Miami Dolphins, one of their most difficult in-division opponents. There is a silver lining to this situation, however. Though the Patriots have lost to the Dolphins three times since 2013, all three losses have taken place on the road. At home, the Patriots haven’t been defeated by Miami since 2008. Then again, that was without Brady, who was out for the season with a torn ACL. Matt Cassel was the starter, completing 19 of 31 passes for 131 yards, one touchdown and an interception, while being sacked four times. This was also the pre-Gronkowksi era. In the 10 games the Patriots have played against the Dolphins with the tight end on the field, they have won eight. Gronkowski has caught a total of 39 passes versus Miami for 606 yards and six scores, averaging 60.6 yards per game.

Even if Garoppolo’s performance is underwhelming, Miami counterpart Ryan Tannehill may not fare much better. Tannehill’s career performance against the Patriots has produced a sub-60 percent completion percentage and eight interceptions to his 10 touchdowns. He’s also thrown 37 touchdowns to 30 interceptions in road games over the course of his career. If New England’s defense can force more mistakes than Miami’s does, the likelihood of victory increases. Further, Miami struggled to stop the run last year and there’s no doubt that the Patriots’ run game behind LeGarrette Blount, Dion Lewis, Brandon Bolden and others will be an important crutch to prevent Garoppolo from pressing the pass to the Patriots’ detriment. 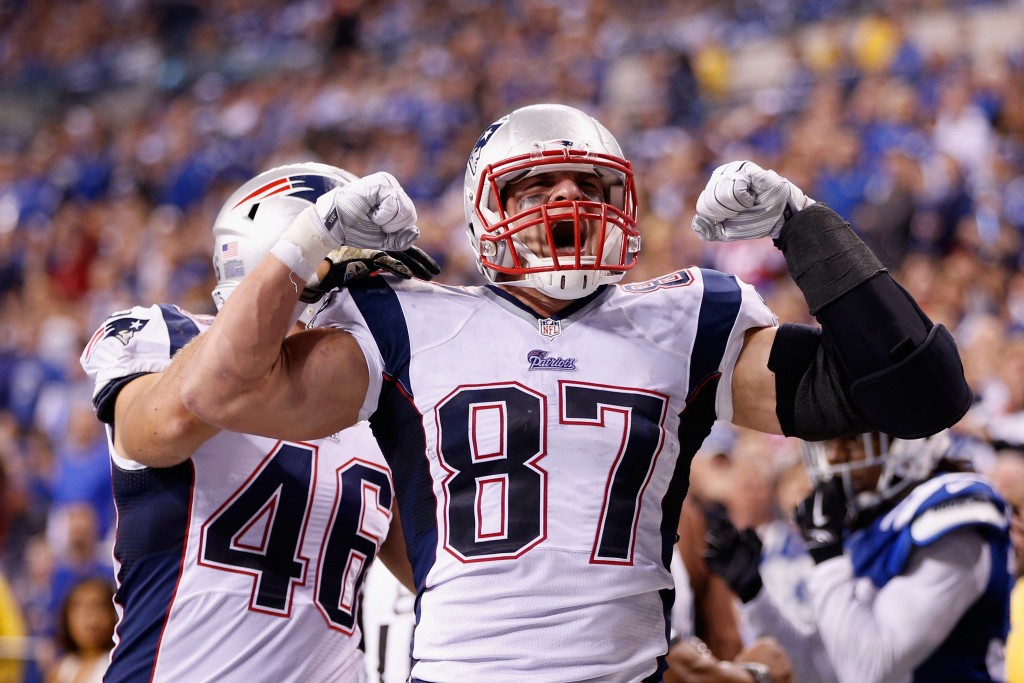 Gronkowski will be a major factor in the two games that follow, beginning with the visiting Houston Texans in Week 3. Though the Patriots and Texans have played just twice in the Gronkowski era, the tight end has come up big with 10 career catches yielding 214 yards and two touchdowns, an average of 107 yards per game. Add Bennett into the mix and the Texans will have many physical players to cover that may prove too great of a task. Further, that clever Patriots defense could have a field day against Houston quarterback Brock Osweiler, who has just seven career starts to his name at present and nine by the time he travels to Foxboro.

It should be noted that the Osweiler-led Broncos defeated the Patriots last season, but it was a close game that Denver won in overtime. The Patriots will need to be more concerned with the J.J. Watt-led Texans defense than the Osweiler offense, which means that Garoppolo will need to be well-versed in completing quick passes to help neutralize Houston’s pressure. Either that, or the Patriots’ offensive line will have to perform better than they did in pass protection last year, ranked 18th by Football Outsiders. Perhaps the return of line coach Dante Scarnecchia can drive improvement from the group.

The final game taking place during Brady’s suspension is another AFC East contest, this time against the Buffalo Bills. It too is a home game, but it’s also the next chapter in the Rex Ryan-Bill Belichick feud. While Ryan would love to march into Foxboro and take down a Brady-led Patriots team, it may prove much smoother sailing against Garoppolo. There is the Gronkowski factor, though, that must be accounted for no matter who is under center given the Bills’ history in trying to stop him. In nine games against Buffalo, Gronkowski has caught 46 passes for 693 yards and 10 scores. That’s more than one touchdown per game and 77 yards on average. 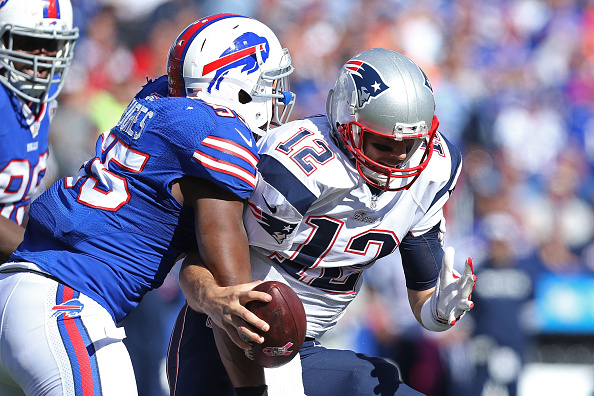 Buffalo does have what it takes to make Week 4 a tough one on both New England’s offense and defense. While the Bills’ defense gave up significant passing yardage last year, they also came away with 17 interceptions. The offense was also tops in the league in rushing yardage and rushing touchdowns. Therefore, it’s not impossible to imagine a situation where the Bills use the run game to control time of possession and an aggressive approach on defense to keep Garoppolo, and thus Gronkowski and company, off the field.

While it is entirely believable that the Patriots will be 3-1 when Brady returns from his suspension, there are also ways for the team to be 1-3 or even 0-4 when the true starter returns. At least the fact that Brady has come to terms with his suspension opens the door for Garoppolo to get a significant amount of training camp snaps with the first-team offense. Plus, with the cast around Garoppolo, quality team victories cannot be ruled out. Add Belichick’s creativity and acumen as a head coach and at the very least, the Patriots are set up about as well as they could be to handle Brady’s absence in the first quarter of the season.

The NFL regular season is just 16 games and what happens in the first four can mean the difference between a playoff berth or just missing out, home-field advantage or being forced to travel, having earned a bye or having to jump right into the fray without rest. Though there could be worse opponents for the Patriots over the first four weeks and though they have the assistance of three of those four games taking place at home, any situation that involves the Patriots playing games without Brady as the quarterback raises questions about their ability to win.