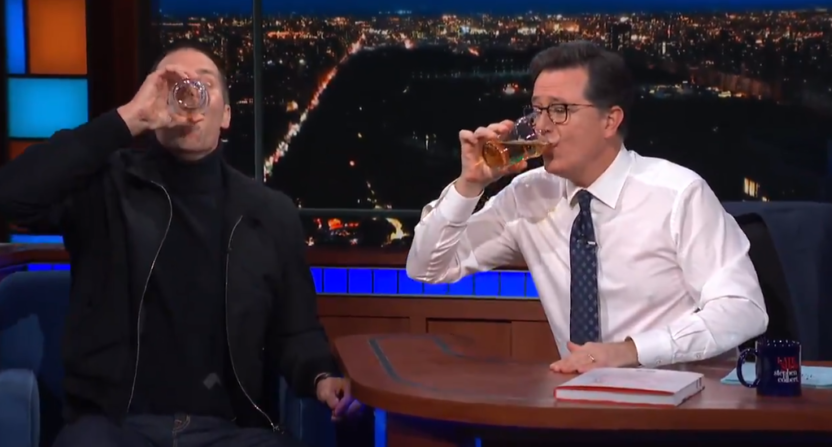 And the four-time Super Bowl MVP showed off some very impressive beer-drinking skills.

Colbert challenged Brady to a beer-chugging contest, and Brady downed the beer in about two seconds.

TONIGHT: Tom Brady doesn't usually drink beer, but when he does… pic.twitter.com/xGWdnlhJOR

Brady could probably finish chugging three beers in the same time he could complete a 40-yard dash these days.

And it turns out Brady’s beer-chugging abilities have actually been talked about before. Patriots backup quarterback explained more to ESPN last August:

“We played up at Buffalo and we couldn’t fly back into Boston because the weather was so bad, so we had to stay the night in Rochester. We drove there, and we all decided we’d go out to dinner together. Tom being who he was, he usually couldn’t come to a team event like that. We might be at Capital Grille and he is sneaking in the back door and then people realize he’s there and he has to leave. But this was impromptu at Dinosaur Bar-B-Que in Rochester. The whole team is there. And it turns into a beer-chugging contest. You have linemen, Julian Edelman, they all think they are going to win. Then someone says, ‘I heard Tom is really great at chugging a beer.’ We don’t usually get to experience him like this, but we finally coax him into doing it. He does it, and let me tell you, you couldn’t have poured out the beer faster into a glass. It was unbelievable. And he slams the mug on the table and puts both fists in the air. He walks away with a look on his face that said, ‘You really thought you were going to beat me on this?’ The place went nuts.”

You can catch the interview in its entirety tonight on CBS.