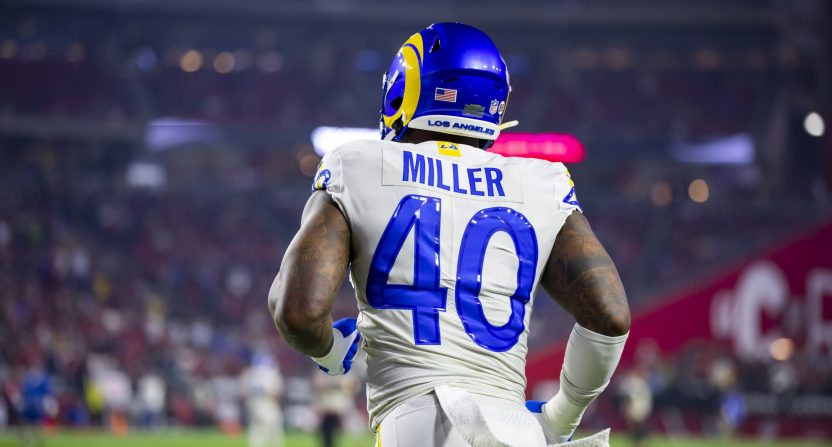 The Los Angeles Rams and Seattle Seahawks are getting set to play a rare Tuesday night NFL game after it was pushed back due to so many players entering the COVID safety and health protocols. Originally slated for 4:25 p.m. ET on Sunday, the game will now be played at 7:00 p.m. ET tonight.

At the time, the game was postponed because more than 30 players from the Rams entered protocols and the Seahawks started seeing a bunch of their players enter protocol as well. The delay allowed for some players to test negative in time to leave protocols and be eligible once more. Rams cornerback Jalen Ramsey got the news that he’d be back for Tuesday’s game. Now comes word that the Rams will also have the services of linebacker Von Miller.

While they’re not getting everyone back, the Rams defense has been fortified headed in a critical game they need to win to keep pace with the Arizona Cardinals and stay in the NFC playoff hunt for a high seed.

Seahawks fans are frustrated that the game pushback meant they end up with more players in protocol than they would have, but the Rams still have a ton of players in there who had no chance of being eligible. It’s a strange situation for everyone.

But of course, people had their opinions about the wonkiness of the situation and how who’s in and who’s out will affect the game tonight.

#Rams get OBJ, Jalen Ramsey and Von Miller back in time.

I’m so glad the game was moved so all the rams players are back and now all the Seahawks players are out… #quitmovinggames @NFL https://t.co/7QUfj7nr2M

Honestly, Von is a luxury at this point.. Havenstein/Noteboom and Jordan Fuller are the most important players left as far as the Rams are concerned. https://t.co/iMYAVnwGqz

Good for him, and that's nice. It's very nice. Good for him. Good. Good good. That's great. Good https://t.co/iSxzTWy9eB

We’ll see how much of an impact Miller has on the game and if the concerns and fears of Seahawks fans end up being warranted. The way things have gone for both franchises this season, it might not end up mattering.