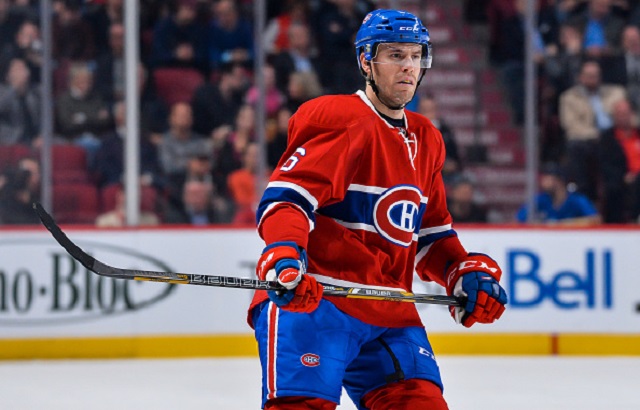 Through 11 games, the perfect time to judge an offseason trade that will have repercussions on both franchises for years and even decades, the Montreal Canadiens won the P.K. Subban-for-Shea Weber trade with the Nashville Predators. The Canadiens were 9-1-1 and the Predators were 3-5-3 solely because Weber was a team-first leader and Subban was a selfish locker room cancer properly exiled to America.

It took until Nov. 6 for Kevin Allen of USA Today to call Weber the best defenseman in hockey and claim that he transformed the Habs into a playoff team, as if that’s not what they were perennially with Subban when Carey Price was healthy. If there were ever a time to anoint someone “best defenseman” when they’ve never been that, it’s Nov. 6.

Then you had hockey people like this citing plus-freaking-minus on Nov. 9 to show Weber was better than Subban.

Shea Weber already a plus-15 on the year, tops in #NHL. 11 points leads D-men. People really think Subban was the better player? #Habs

Well, there’s no denying it — the Habs won the trade after 11 games. Weber is a rock-solid god, instilling fear into forwards as he drives them through the boards, while Subban is a fancy skater man who is more interested in karaoke than carrying an OK team or something.

But through Games 12-26 in the 2016-17 NHL season, it’s very clear that the Predators have really won the trade. Congratulations to general manager David Poile, Subban and the wonderful fans that have waited to hear these words for two long months.

If you’re reading this and saying, “Dave, how can you possibly declare the winner of the this trade with such a small sample size?” Sorry, ombudsman wannabe, but if you can decipher the victor of this deal after 11 games, you can do that with even more gravitas after two or three games more beyond that.

After 11 games, Weber had six goals and 10 points, while Subban had two goals and six points. That doesn’t include the obvious leadership Weber brought to the Habs that allowed Price to have around a .950 save percentage over that time, while Subban clearly told Pekka Rinne, “You should suck real bad over this time period.”

Unfortunately for the Habs, Weber has decided to stop being a leader of late.

The Habs are just 8-5-2 in their past 15 games and Weber has only two goals and eight points. Geez, is he even an NHL defenseman with numbers like that? Why is Weber shirking his leadership duties and failing to guide his team to nothing more than a slightly above-average stretch?

Meanwhile, Subban is the best defenseman on the planet and has won the unofficial Norris Trophy for this stretch of games chosen at random to fit my perfect narrative for this content. The Preds are 9-4-1 over their most-recent 14 games and Subban has five goals and 11 points, and his positive attitude has Rinne in the midst of his best season in years.

I’ve searched far and wide for updated takes from these people that lauded Weber after about one-seventh of the schedule, but they’re not out there. Why is that? Don’t they know we have to anoint winners and losers of trades earnestly every 10-to-15 games? Why else do we have jobs in this field?

But things are likely to get much worse for Weber over the next couple months, as the Habs will be without centers Alex Galchenyuk and David Desharnais over the next six to eight weeks solely because Weber didn’t do his job protecting their knees. It can’t be a coincidence that over Subban’s entire time in Montreal, Galchenyuk and Desharnais never suffered serious knee injuries at the same time and now they have under Weber’s unwatchful eye.

Do you think it’s coincidence that James Neal was activated off injured reserve one day prior to the Galchenyuk/Desharnais announcement? Only a foolish, clicks-driven, idiotic hockey writer would see this as anything other than Subban inspiring Neal to heal from an upper-body injury that cost him four games.

Now that we understand the Predators won the trade, I hope everyone understands how foolish it is to judge a deal after a small sample size.