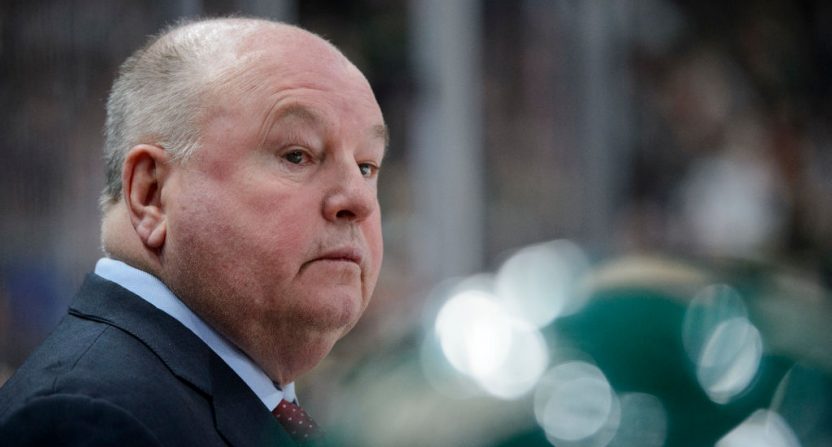 You can add another disappointing playoff result to Bruce Boudreau’s coaching record. That growing list of playoff shortcomings may be behind the coach’s comments following a Game 5 loss which saw his Minnesota Wild kicked out of the playoffs by the St. Louis Blues.

Bruce Boudreau on the Blues: "They weren't the better team, but they won four games."

Well … considering the Blues won four games and the Wild won just one, that actually does make the Blues the better of the two teams. That point can’t really be debated as one team is moving on to play the Nashville Predators and Boudreau is headed off to the golf course. The Wild held a lead just once in the series (Game 4, the only game they won) and were either tied or trailing throughout all of the other four games in the five-game set.

That being said, the lopsided 4-1 series result does hide the fact the Wild had their chances. In terms of pure opportunities, the Wild visually appeared to best the Blues by a 2-to-1 margin. However, Blues goalie Jake Allen was outstanding and may have stole at least a couple wins for his side. While the Wild couldn’t figure out Allen and convert on their chances, the Blues found the back of the net at timely moments. The Blues were able to find a goal when they needed one most while the Wild could never get over the hump.

Statistically, the Wild did a lot of things well. They dominated faceoffs (57.4%), though the Blues might complain that it was done a bit unfairly. They also generated an average of 36.4 shots per game while allowing an average of 26.8 per game to the Blues. Though they did well getting shots on goal, their shooting percentage (thanks to Allen) was an ugly 4.4%. Meanwhile, the Blues scored on 8.2% of their shots.

Given Boudreau’s reputation, his comments don’t come off too well. His statements may explain his overall mentality and may also reveal why his teams routinely stumble in the playoffs. Sometimes winning in the playoffs is all about getting hot at the right time and scoring at opportune times. If your team does neither of those well, you can’t whine about how you were better as you prepare for a long summer.

On the bright side, this is relevant once more:

This is from last year’s NHL playoffs but it really is evergreen. pic.twitter.com/aVzUWOLiAw