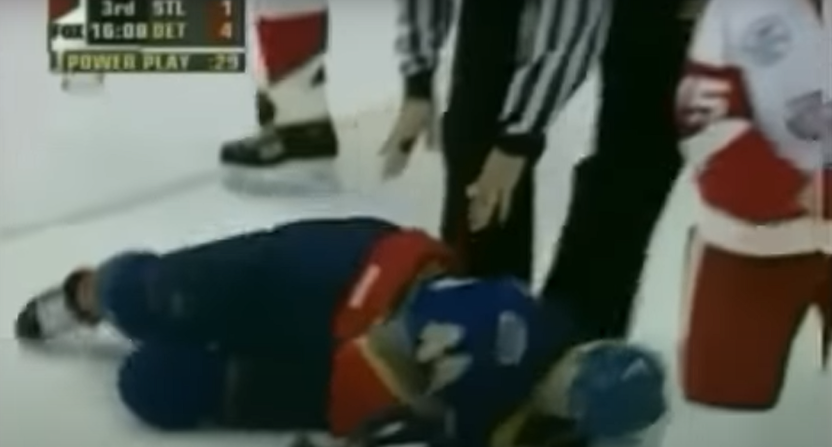 Around Buffalo Bills’ safety Damar Hamlin’s on-field collapse and transportation to hospital Monday, many thoughts turned to former NHL defenseman Chris Pronger. Back in a second-round Stanley Cup Playoffs game on May 10, 1998, Pronger experienced something with some similarities.

Pronger, who was playing for the St. Louis Blues then, took a slapshot from the Detroit Red Wings‘ Dmitri Mironov right near his heart. He fell down, got up, took two strides and collapsed. His heart skipped beats (cardiac arrythmia) from the blow, and he was unconscious for about 30 seconds. He was transported to hospital for evaluation and kept there overnight. But he recovered quickly and played in the next game two days later (after wearing a heart monitor for 24 hours and going through a battery of tests).

That had many thinking of Pronger Monday night, especially with medical experts discussing commotio cordis (ventricular fibrillation arising from blunt force impact) as a possibility with Hamlin. Pronger didn’t necessarily experience exactly commotio cordis (a 2002 British Journal of Sports Medicine paper described his case as a “near-miss”), and neither necessarily did Hamlin (all the Bills have said there so far is that he went into cardiac arrest). But Pronger’s case still came to mind for many:

Chris Pronger suffered commotio cordis after taking a slap shot to the chest in 1998.

Praying for a similar recovery and outlook for Damar Hamlin…Pronger was back on the ice weeks later and played 12 more seasons en route to the Hockey Hall of Fame. 🙏pic.twitter.com/qYfT8kv66s

And on Tuesday morning, Pronger shared his prayers and sympathies for Hamlin:

Prayers that Damar Hamlin can have the same outcome that I was fortunate to have with my incident. Our thoughts and prayers go out to Damar, his family, teammates and the greater NFL community during this incredibly scary time. 🙏🏻https://t.co/u90LBw5MfO

Pronger’s 1998 collapse was terrifying for many in the building or watching on TV. Long-time St. Louis columnist and radio host Bernie Miklasz had some thoughts looking back on that in a tribute to Pronger last January around the Blues’ retirement of his jersey:

I’ll never forget being there the day Pronger was struck in the chest by a shot by Dmitri Mironov. It hit Pronger at the spot of his heart, and the sheer force of the blow took him down as if felled by a bullet.

It was early in the third period of Game 2 in the series, a contest the Blues would lose 6-1. But no one on either side cared about that. They were too shocked to acknowledge the scoreboard. Joe Louis Arena had never been so quiet during a game. This will sound awfully dramatic, but I speak for many who were there when I say this: we feared that Pronger wouldn’t get up. We fretted over the possibility of death.

After the game, Blues forward Blair Atcheynum described seeing Pronger in distress on the ice. The color had left Pronger’s face, and his eyes were twitching. The Blues were horrified and scared of the worst possible ending to a medical emergency.

“It’s just frightening to see a man buckle like that,” Atcheynum told reporters. “His eyes were rolled back in his head.”

Fortunately, in Pronger’s case, this didn’t wind up being a long-term problem. But every medical situation is different, and there have been many heart-related collapses throughout sports over the years. Many of those didn’t involve contact, and still led to long-term consequences or even death for the athletes involved. Hopefully Hamlin’s case turns out as well as Pronger’s did.