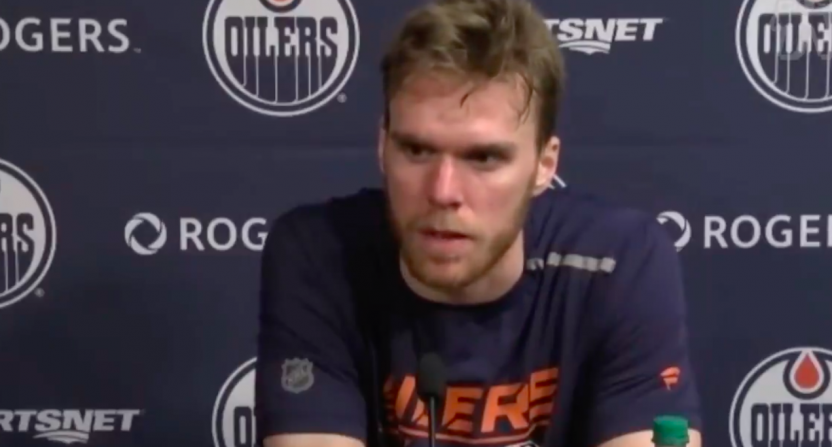 One year ago, Edmonton Oilers forward Colby Cave passed away at the age of 25 after being put in a medically-induced coma for surgery to remove a colloid cyst that put pressure on his brain. The loss was tragic for Cave’s friends and family, not to mention his hockey teammates with Edmonton and previously with the Boston Bruins.

On Saturday, Oilers players and staff attended a remote memorial service for Cave. It was originally supposed to be a day off for the squad, which is perhaps in part why Cave’s widow, Emily, has originally announced the date of the service on April 1. However, the NHL decided on April 5 that it would reschedule a May 7 game between the Oilers and Flames to that evening due to COVID-19 postponements affecting the schedule of teams in the NHL’s North Division.

While the move perhaps made sense on paper, it didn’t feel entirely kind in terms of the emotional well-being of the players. That was highlighted after the fact as the Oilers were listless in a 5-0 loss to the Flames on Saturday evening. Afterward, normally reserved Oilers star Connor McDavid shared his disappointment with the league for the insensitivity of rescheduling the game.

an emotional connor mcdavid: "some days are more than just about hockey. obviously the performance wasn't there tonight, but today is about colby and his memorial and his celebration of life. i thought everyone did a great job speaking." pic.twitter.com/Y1VLsREAoh

“The performance wasn’t there tonight, but today is about Colby, his memorial, and his celebration of life,” McDavid said. “You’re asking a lot from guys, to sit through something like that, remember your teammate, see what the whole family is going through, and be expected to perform that night. I’m not sure what the league was really thinking there.”

Good for Connor McDavid.
So often he says the politically correct thing. Not this time.
It was disrespectful of the NHL to reschedule a game to the day of Colby Cave's memorial.
It's not about a 5-0 loss. It was the wrong thing to do and the NHL should wear it. https://t.co/GEJjoaxKfq

Oilers defenseman Darnell Nurse also shared similar feelings, saying that the entire experience was tough, though trying to make excuses for the loss.

“Nope, I haven’t been through something like that,” Nurse said to reporters. “You watch that ceremony this morning and play at night, nope. I’ve never done that before. It was tough, for sure, but we’ve got to show up a little better.”

The NHL may have thought they’d done what they could by at least making this a night game, but it obviously was sensitive to the bigger picture, especially in light of what the Oilers players were dealing with earlier in the day. Some will probably say that hockey players need to tough it out or that it’s not an excuse for losing the game, but mental health concerns are different these days, and giving players an opportunity to grieve the tragic loss of a teammate deserves more space than the NHL was willing to give.