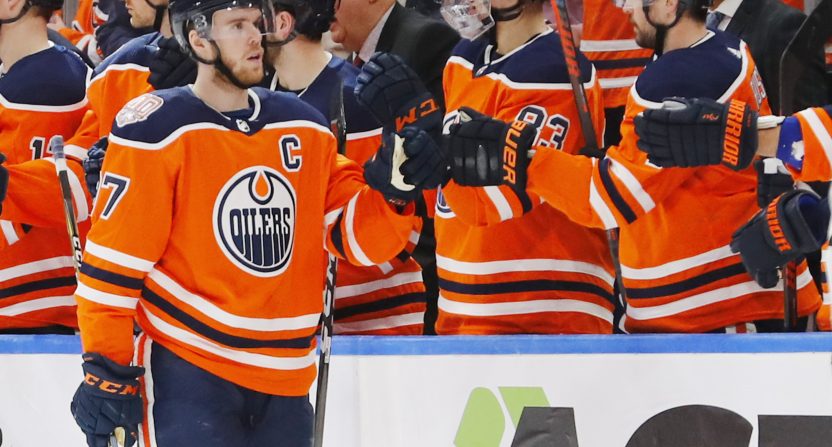 One of the NHL’s best players isn’t too happy that he’s once again missing the postseason. Edmonton Oilers forward Connor McDavid vented to reporters following his team’s loss to the Vegas Golden Knights on Monday night, expressing his frustration that the Oilers won’t make the playoffs.

McDavid will miss the playoffs for the third time in his first four NHL seasons. The Oilers as a team have made the playoffs just once (2016-17) in the last 12 seasons.

You can’t blame McDavid for the Oilers once again falling short. His 115 points are the second-most scored in the NHL this season, trailing only the superhuman 125 points from Nikita Kucherov. Statistically, McDavid has had the best season of his young career, matching his high in goals (41) while setting new highs in assists (74) and points.

The season has been a strange one for the Oilers, which is noteworthy as the team always seems to have its fair share of drama. The changes at both the head coach and general manager positions proved to be difficult on the players, even if the changes were necessary.

“It’s been an insane season. Coaching change, GM change. Good times and bad times. It’s been a rollercoaster. It’s been emotionally challenging. It’s been hard mentally to keep on going. We were always kind of right there.

We were close and then we’d drift away, that’s the way it goes.”

For what it’s worth, the Oilers weren’t horrible this season, but they were pretty mediocre. With three games left on the schedule, the Oilers will finish with nearly identical .500 records at home (18-18-4) and on the road (16-18-5). Despite McDavid’s efforts, the team’s offense currently ranks 20th with an average of 2.81 goals per game. The defense comes in at an ugly 25th with an average of 3.30 goals allowed per game.

The Oilers appear to be a classic case of a team that’s struggling to build around a once-in-a-generation superstar. They’ve found a great offensive weapon to help McDavid out in Leon Draisaitl, but the questions surrounding the overall depth and the struggles on defense and in goal persist. The inability to surround a player like McDavid with any kind of depth led to some of the front office changes seen this season. The team hopes the bumps in the road now will produce better seasons in the future.

Looking ahead, McDavid is under contract with the Oilers through the 2025-26 season. His massive contract, which carries an annual salary cap hit of $12.5 million, is more than fair given his consistent outstanding production. However, all of the years left on that deal may seem like an eternity for a player who isn’t happy with missing the postseason.

No one is claiming that McDavid is going to ask to be moved. But, his frustrations – which appear to be mounting – need to be addressed through the team going out and finding more talent as soon as possible.