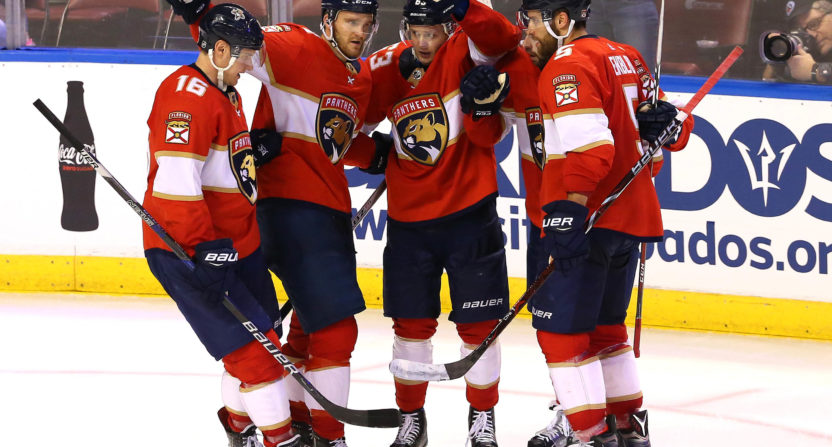 The 2015-16 season was supposed to be the first step in legitimizing the Florida Panthers as both a contender and a relevant franchise in the NHL. The team broke its franchise record in points (103), won the Atlantic Division, improved by 35 points over two seasons and made the playoffs for just the second time since 2000.

But not everything was perfect. The team lost in the first round of the playoffs, meaning the franchise still hadn’t won a playoff series since 1996. The team was bolstered by having the second-best PDO in the league, with success both shooting the puck and in net. Multiple guys had career years both in points and shooting percentage while Robert Luongo and back-up Al Montoya combined for a .921 save percentage.

The team was just 13th in 5-on-5 Corsi, so there were obviously improvements to be made. And while many of the team’s prominent players were young (Jonathan Huberdeau, Aleksander Barkov, Vincent Trocheck and Aaron Ekblad), some others were quite the opposite (Willie Mitchell, Jaromir Jagr and Brian Campbell). The team was set up well for future success, but there were some moves that needed to be made.

The team had previously hired a group of analytically-oriented guys, and decided to give them significantly more influence. General Manager Dale Tallon was kicked upstairs and Tom Rowe took over as GM.

The team made a series of moves, perhaps as the most active team in the offseason. They resigned Jagr to a one-year deal. They traded Eric Gudbranson for a package including prospect Jared McCann and parted with Dmitry Kulikov for Mark Pysyk. They signed Keith Yandle to a long-term deal. Ekblad signed a huge extension. James Reimer, Jason Demers, Colton Sceviour and Jonathan Marchessault signed as free agents. Meanwhile, Campbell opted to sign with the Chicago Blackhawks. Trochek and Smith rounded things out by signing big extensions.

The Panthers appeared to be a better team heading into the season, but getting the same puck luck was not going to be easy. The team’s PDO dipped all the way down from second to 25th. Huberdeau got hurt and missed more than 50 games, Barkov missed 20, Ekblad missed 15 and Nick Bjugstad missed 28. Meanwhile, team save percentage dipped to .915. After a slow start, the team fired coach Gerrard Gallant and famously left him on a street corner to catch a cab by himself. Rowe took over behind the bench and did not have much success.

The Panthers dropped 22 points all the way to 81 and sixth in the Atlantic. The team dipped to 25th in goals and 21st in goals allowed, dropped them from fourth to 23rd in goal differential. They remained 13th in even-strength Corsi, amid everything. A reasonable observer might conclude that only some of the moves worked out, the team got some bad luck and the new administration deserved at least one more year. Another reasonable observer might suggest they fired everyone, Tallon included, and start over with a new front office.

But team owner Vinny Viola is anything but reasonable, so the team stripped Rowe of his responsibilities and inserted Tallon back as GM. What ensued has been so impossibly petty, it’s a miracle more of non-hockey Twitter hasn’t taken notice.

Tallon attempted to rid the team of any evidence that anyone but him had ever made any moves. The trouble started around the time of the expansion draft when the Panthers traded Vegas Reilly Smith for a fourth-round pick. They also left Marchessault unprotected in the draft, despite the fact that he had just scored 30 goals for just $750,000 in salary. The team had lost 45 goals between the two forwards. That number increased to more than 60 when Jagr was not resigned. The team filled those holes at forward with Evgeni Dadonov (who now has nine goals through the first half of the season) and with Jamie McGinn (five goals, 13 points), who was acquired in a trade for Demers. In a far-less important move, Jussi Jokinen left in free agency as well.

The team, predictably, sucks. Injuries have not been nearly as much of problem as all of the top players have been healthy. Yet, the Panthers are on pace for 80 points. They are 25th in goal differential. They are 20th in even-strength Corsi. They have absolutely no direction and are wasting the primes of several of the league’s most-talented young players.

You might think it was unfair, as I’m sure Tallon does, that his responsibilities were stripped from him just as the team was getting good. But what’s fair about a fan base being subjected to the continued mess wrought by a GM that took six years to make the playoffs in the first place?

In an act of crazed ego, Tallon ruined something that he spent years building, because someone else had some say in it. He, in all likelihood, has inflicted long-term damage on the viability of hockey in South Florida. He has almost no chance of seeing this turn around in any discernible way before he’s fired, but considering his vast and unearned confidence, I’m sure he’ll find something else to ruin real soon.

2 thoughts on “How Dale Tallon ruined the Florida Panthers”