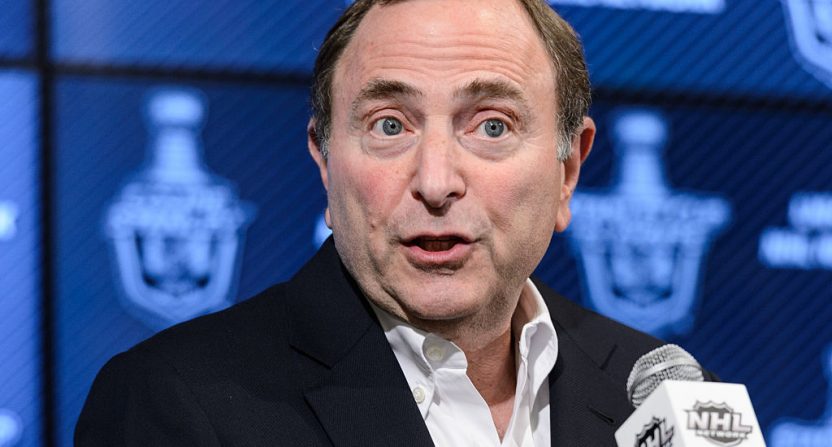 Jason Botchford of the The Province got this lovely quote from Bettman, where the commish said the NHL’s participation in the Olympics has had “no positive impact.”

Bettman: NHL players participating in the Olympics has had "no positive impact"

Bettman elaborated on his comments during a radio interview on Sportsnet. Foolishly, he called the events “disruptive.”

“It hasn’t any impact,” Bettman said in a radio interview Wednesday. “We look at TV ratings, we look at attendance, we look at everything, and it’s been disruptive. Is it conceivable that in some places around the world, where they’re watching the Olympics, it might have a positive impact? I suppose, but I think back when we went to Nagano, Japan, [in 1998] the building that we played the event in, the day after the Olympics were over, they ripped out the ice.”

Unfortunately, Bettman sees the tournament as a negotiating tactic. He’s tried and failed to extend the CBA in return for participation.

In this case, Bettman is spewing garbage.

Is growing the game not important? How about making players and fans happy? Bettman just cares about his and the league’s bottom line. Nearly everybody aside from the NHL itself wants the league to go and participate.

Personally, it’s insane to me that Bettman would use the Olympics as a tactic to get something from the players. If eligible, representing your country should be a right and not a reward for giving something up. Alas, Bettman needs to look in the mirror and realize he only has a league because of the players within it. Let the players play.