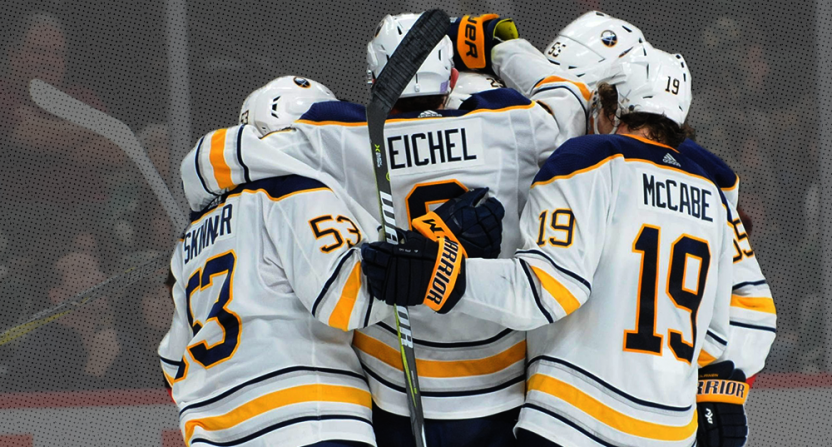 In the last five seasons before 2018-19, the Buffalo Sabres were consistently amongst the most mediocre teams in the NHL. The team never won more than 35 games in a full season in that span, routinely finishing in the bottom of the Eastern Conference standings. Things have changed big time this year, as the Sabres sit second in the Eastern Conference with 20 wins in 34 games. highlighted by a 10-game winning streak in November. So what’s changed?

The offense is healthy and producing

The Sabres’ top line has clicked this season.

Superstar center Jack Eichel has been plagued with injuries over the past two seasons, but this year, he’s remained healthy and has been quite productive. The 21-year-old ranks seventh in the league in scoring with 14 goals, 31 assists, and 45 points in just 34 games, putting him on a 100-point plus pace. Eichel’s looked every bit like the star player the Sabres expected to get when they took him second overall in the 2015 NHL Draft.

More importantly, Eichel is surrounded by legitimate talent. 2014 second overall pick Sam Reinhart has put up nearly a point per game besides Eichel. Winger Jeff Skinner, acquired in an offseason trade with Carolina, has exploded alongside him and ranks second in the league with 24 goals.  Buffalo has one of the best top lines in hockey, and while I’d expect a little regression (especially from Skinner), the trio is legitimately great.

The team is top-heavy, so the other three lines will need to provide a tad more secondary scoring. But this is a much-improved Sabres offense from one season ago, and coach Phil Housley has plenty to work with thanks to a strong offseason and health being on his side.

The goaltending is stronger than ever

Buffalo’s goaltending hasn’t been a total disaster this year.

In 2017-18, Buffalo Sabres goalies posted a combined .913 save percentage at even strength, the fourth-worst mark in the league. General manager Jason Botterill made sure to address the position this summer, bringing in the consistently steady Carter Hutton from St. Louis while elevating Linus Ulmark to the backup job. So far, those two have provided quality goaltending for the Sabres, combining for a .925 save percentage at even strength, a marked improvement from one year ago.

Hutton, a career backup goalie, has started 23 games and has provided league average results, with a 13-8-2 record, 2.54 goals against. and a .919 save percentage in all situations. Meanwhile, Ullmark has given the Sabres quality minutes in 12 starts, with a 7-1-3 record, 2.94 GAA, and a .915 save percentage in 12 games. Buffalo has gone from allowing the 3rd most goals in the league last season to ranking 12th in goals against this season. The duo might not be the sexiest names on the block, but they’ve been steady between the pipes, which is a huge reason Buffalo has taken the next step.

The Sabres have simply been a more responsible, consistent team this year.

Adding Rasmus Dahlin, the first overall pick in the 2018 draft, has given the Sabres a number one defenseman and a building block on the backend. Behind Dahlin, there’s a group of solid, though unspectacular, D-men. Losing Jake McCabe to injury has hurt, so the depth behind Dahlin will be tested. But when healthy, the Sabres D-corps is capable.

Meanwhile, on special teams, Buffalo has improved their penalty kill from the 10th-worst mark in the league at 77.9% in 2017-18 to fifth-best this season at 83%. The Sabres’ 18th-ranked power play has largely produced similar results to last year, but there’s room for improvement considering how deadly the top-line should be with a man advantage.

Buffalo has become a team destined for their first playoff berth in more than half a decade due to improvement across the board. Armed with one of the best top lines in hockey, solid goaltending, and an improved defense, the Sabres aren’t the laughing stock of the league anymore. It seems the team has finally figured things out on both ends of the ice, and while I don’t expect Buffalo to be this good all season, they’re a legit playoff contender who appears toh ave put their struggles behind them.