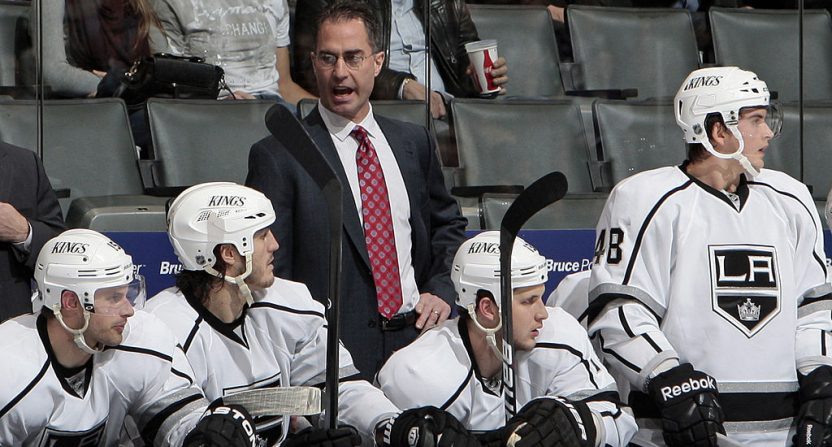 When Darryl Sutter was let go by the Los Angeles Kings, we wondered how far outside the organization the Kings would look to find the two-time Stanley Cup winner’s replacement.

The answer? Not very.

On Sunday, the Kings announced that associate head coach John Stevens would be the team’s new head coach.

Stevens has been a member of the Kings’ coaching staff since 2010-11, working his way up from assistant to associate coach in 2013-14. Interestingly, Stevens was one of Sutter’s biggest sounding boards and coaching partners. It’s a curious decision considering the organizations seeming desire to start fresh after firing Sutter and general manager, Dean Lombardi.

However, Stevens unquestionably deserved a coaching gig in the NHL. Since leading the Philadelphia Flyers from 2006-2010, Stevens name has been connected to head coaching jobs around the league for years. Since the Kings won multiple Stanley Cups with Stevens being one of the key decision makers, it only makes sense he was coveted. But, Stevens opted to remain in Los Angeles, with his patience being rewarded.

Is Stevens the right man for the job? It’s hard to say. He’s a mainstay from the Sutter era, so it’s questionable how much he’ll change the Kings’ culture. Los Angeles has had back-to-back average seasons resulting in zero playoff series wins. The team is getting older and there’s not much help coming internally. Although, this current version of the Kings team continually put up elite numbers in possession and defense.

But, considering the options out there, Los Angeles could have done much, much worse than Stevens. He’s familiar with the organization, knows the returning players, and has been in Los Angeles a long time. He’s also got tangible experience as a head coach. With Gerard Gallant and Ken Hitchcock off the market, there aren’t a ton of intriguing veteran options.

Additionally, the organization didn’t seem ready to hire an up-and-comer with no NHL head coaching experience, like Toronto Marlies head coach Sheldon Keefe or Boston University’s David Quinn. It’s a safe, unsexy choice, but Stevens is a completely fine, vanilla pick, for a team that didn’t want to make a splash.

It’s hard to say from this point on whether the Kings stay the course, or try to methodically rebuild under Stevens. Anze Kopitar, Drew Doughty, and Jonathan Quick are all still star players. However, all of them are getting at the point of their career where they’re falling out of their prime. Dealing them now could restock the Kings’ bereft farm system and close the chances of a Kings dynasty. It may seem extreme, but whether they can win now is debatable, even with talent on the roster.

It’s possible Stevens will lead the Kings back into contenders quickly, but that’s probably not the direction the team should be heading. Instead, it’s time to cut bait of longtime veterans and start building towards a future Cup-winning team. Whatever path they choose, Stevens seems equipped to guide the club.