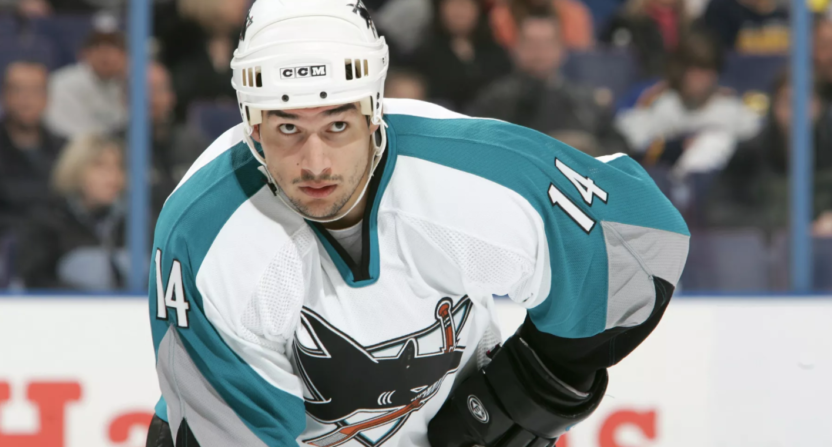 On Tuesday, Jonathan Cheechoo officially announced that he was retiring from professional hockey. If you’re wondering why we’re dedicating an entire article to a hockey player who hasn’t skated in the NHL since the 2009-10 season, you’re in for a tale of one of the more bizarre careers in hockey history.

Cheechoo, 37, was an enigma who miraculously won the Maurice “Rocket” Richard Trophy, an award given to the player with the most goals in a season, before falling out of the NHL less than five years later. He’s one of the true one-hit wonders in the sporting universe. That on its own is interesting, but the fandom that sprung up and continued to follow Cheechoo as his career sputtered was fascinating.

Cheechoo was born in Moose Factory, Ontario in July of 1980. OK, maybe we don’t need to go that far back, but that is one awesome city name.

During the 1998 NHL Entry Draft, the San Jose Sharks made a trade with the Nashville Predators in a deal that saw the Sharks move down in the draft. With the 29th overall pick, the Sharks selected Cheechoo.

The move was immediately criticized. It was widely believed Cheechoo would stay on the board for several rounds due to a skating ability that left a lot to be desired. One criticism suggested Cheechoo skating forward was slower than most hockey players skating backward. That being said, he did have some impressive numbers in the Ontario Hockey League and was at the very least an intriguing, albeit early selection.

Cheechoo made the jump from the American Hockey League to the NHL during the 2002-03 season when the Sharks were looking for a spark in their lineup. He played more of a grinding role in his rookie season, scoring just nine goals and 16 total points in 66 games. His role expanded the following year in 2003-04, chipping in 28 goals while skating with Mike Ricci and Scott Thornton (not to be confused with Joe Thornton).

He started to generate some buzz with this slick goal in 2004.

The lockout killed off the 2004-05 season (thanks, Gary “Lockout” Bettman), which allowed Cheechoo to skate abroad in Sweden.

With the lockout over, the year started with Cheechoo playing fairly well by scoring seven times in 24 games. The Sharks then landed Joe Thornton in a trade with the Boston Bruins, forever altering the future of the San Jose franchise and setting up a miraculous season for Cheechoo.

Thornton immediately found chemistry with Cheechoo, lifting Cheechoo to a level of hockey that will forever live in the history books. Cheechoo went nuts, seemingly scoring every game and ending the season with 56 goals. His 56 goals and 93 points were a shock and total surprise. They were the most goals scored in a season in franchise history. He set numerous Sharks records, including most power play goals in a season (24) and most hat tricks in a season (five!).

Cheechoo’s 56-goal total places him in elite company. He’s one of just 31 players who have scored 56 or more goals in a season in NHL history.

Following all of his accomplishments, the future looked bright. The Sharks signed him to a new contract and hoped he’d serve as a key piece in their offense.

Unfortunately, that 56-goal season was the clear peak in Cheechoo’s career. What followed was a steady decline that saw him leave the Sharks in 2009 and he was out of the NHL by 2010.

Following his 56 goals in 2005-06, here’s how his numbers stacked up throughout the remainder of his NHL career:

Now, you’d expect Cheechoo’s fanbase to grow more and more quiet as his career tumbled. That wasn’t the case. Instead, we were all treated to a series of videos from one fan who never lost the faith as Cheechoo’s career tanked. These videos became a fun inside joke of the hockey world. They never reached the level of the Traveling Jagrs or went viral, but they were a hit among fans who found them.

The first video came out in 2009 while Cheechoo was still with the Sharks. Train, Train, Cheechoo Train was born.

With Cheechoo’s career in the dumps, the video struck the perfect chord. One fan, Aaron Bell, desperately trying to resurrect the skill that produced an insane 56 goals. It was also kind of catchy.

When Cheechoo joined Ottawa, a sequel video was born that roasted San Jose for their mistake in letting such a great player go.

When Cheechoo dropped down to the minors, the teams themselves tried to get involved with whatever the hell you want to call these videos. Things are a bit more loose and a bit more creative in the minors.

The Peoria Rivermen officially used the video below to promote the greatest player in the history of hockey coming to town.

The Oklahoma City Barons later jumped on board too, with this official video that probably jumped the shark on the whole idea and marked the end of Cheechoo’s aspirations of playing again in the NHL.

Finally, Cheechoo’s time in North America ended. He shipped over to the KHL to try and find some of the spark that led to his record season. Unfortunately, nothing ever panned out despite him skating with three different KHL teams in four seasons.

With his retirement formally announced this week, the rags-to-riches-to-rags story is complete. In a respectable move, the Sharks have already announced that they plan to honor Cheechoo prior to their game against the Calgary Flames on March 24th.

Maybe the Sharks will invite Cheechoo’s ultimate fan to take part in the celebration? It’d be an appropriate ending to one of the stranger NHL careers.