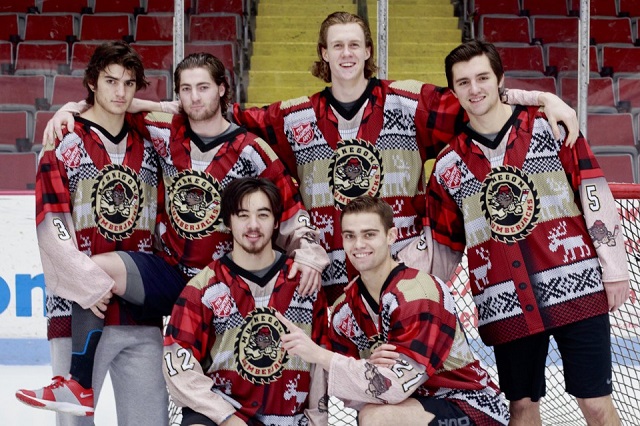 Who hasn’t been invited to, participated in or even made your friends show up to an “Ugly Sweater” Christmas party? It’s been a thing for years on the holiday party circuit, but it has now crossed over to the world of sports as well.

Specifically, it has really crossed over to the world of junior and minor league hockey. No fewer than a dozen teams are embracing the “ugly sweater” theme and donning special jerseys for the holiday season.

The latest in that trend are the USHL’s Muskegon Lumberjacks:

They aren’t the only ones in the USHL embracing the theme either, as the Sioux Falls Stampede also joined in the fun.

Hey @Buccigross, check out these jerseys we will be wearing in tonight's @USHL game on Ugly Christmas Sweater night! pic.twitter.com/0lu8Qn3gOv

But the real fun of it all came from the AHL, where the highest level minor league affiliates of NHL teams exist.

Perhaps the biggest winner of them all were the Chicago Blackhawks AHL affiliates, the Rockford IceHogs. They went all in on the holiday spirit and did perhaps the most tasteful of the “ugly sweater” theme.

The Colorado Avalanche affiliate, San Antonio Rampage, decided to not go big, but definitely something your crazy tech or science teacher in high school would wear.

Don’t think the West Coast doesn’t get in to the act either, because the San Jose Sharks AHL affiliate, the San Jose Barracuda, gave us some deliciously busy ugly sweater uniforms. Apparently they are also being auctioned off for charity. NIIICCEE.

Other levels of hockey are getting in the act too, as the next level down, the ECHL, had a submission for your consideration.

But don’t forget about the Southern Professional Hockey League (that’s really a thing) and the Peoria Rivermen, either. Their sweater game is STRROOONNGGG.

Our Ugly Christmas Sweaters are here!!! We'll wear these jerseys Fri night vs @RiverKings & have a postgame auction! pic.twitter.com/sA8MUxdLL5

The winner for all-in this season? It isn’t even a United States-based team. Instead, the honor goes the OHL’s Sarnia Sting. Not only did the team find a way to incorporate its team colors in truly horrifying fashion…

… but the coaches also got in to the holiday spirit on the bench as well.

We’re not sure which were more impressive — the sweater jerseys or the coaches’ real-life sweaters.

All of this leads us to wonder where we can get our hands on this awesome collection. After all, there’s nothing better than an ugly Christmas sweater turned hockey sweater, folks.