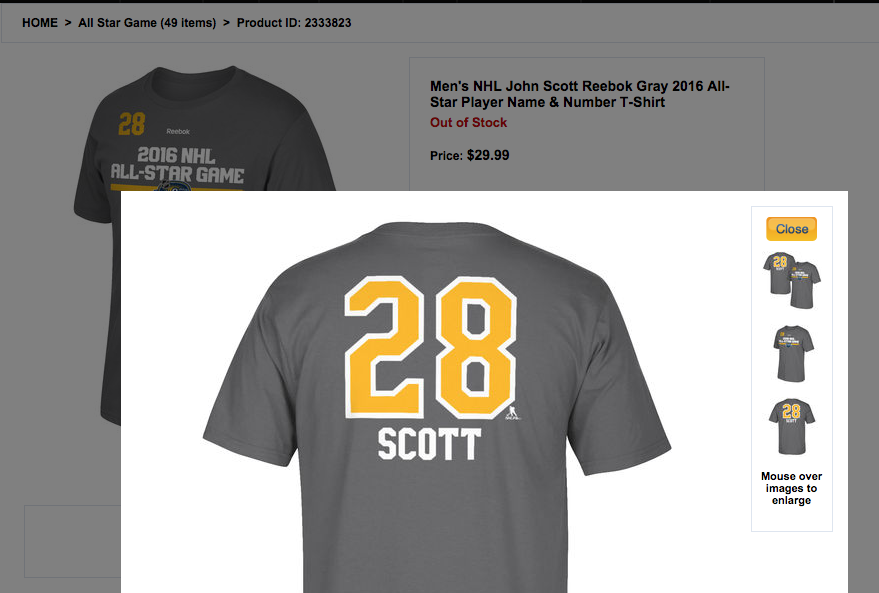 The NHL’s abhorrent treatment of the John Scott situation has been well documented here, and in almost every other corner of the web. But fans are reacting as many suspected they would; embracing the novelty of the situation.

They’ve embraced it so much in fact, that the NHL’s official online shop is already sold out of John Scott All Star T-Shirts. Maybe the NHL underestimated demand (likely), but there figures to be a new supply of Scott shirts coming in soon. Scott will be forced to wear a generic jersey during the skills competition rather than a team jersey because he’s not actually a Coyote anymore, but it’s good to see the shirts selling like hot cakes (wonder why the Patrick Kane shirts aren’t hot sellers…)

But for those worrying about whether they’ll be able to own this unique piece of hockey history, do not fret. Carraway Clothing is selling a different John Scott Shirt, complete with a large picture of his face and a message saying “Thanks for believing in me, Love always, the Captain”. This shirt costs $22 instead of the $30 the NHL edition will set you back (if you can get your hands on it), and some of the proceeds from the face shirt goes to Hockey Helps the Homeless, and not into Gary Bettman’s pocket.

If you want to love John Scott even more, here is his essay from the Player’s Tribune. Get a box of tissues ready.