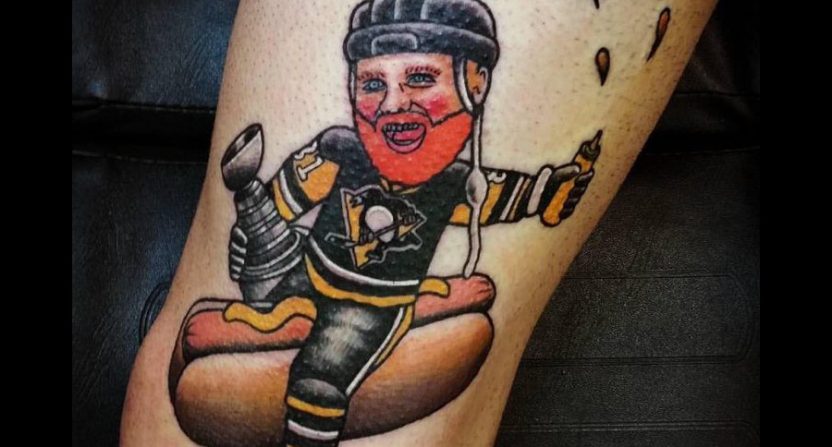 Phil Kessel is an exceptionally talented hockey player, but one who’s taken quite a bit of criticism from the media over the years, and often for some bizarre things. The most famous example of that is the piece Toronto Sun columnist Steve Simmons wrote in July 2015 blasting Kessel on his way out of town after the Maple Leafs traded him, titled “Leafs were sick and tired of Kessel.” That piece took all the typical tired columnist shots at Kessel, from “lack of responsibility” to “sick of his act” to saying he had the “wrong kind” of leadership and the Leafs were better off trading him away regardless of the small return, and it earned Simmons a nod as Keith Olbermann’s “Worst Person In The World,” but it really stood out for its extremely specific opening story about Kessel eating a hot dog daily from a stand at Front and John Streets. That story was soon challenged and ridiculed, then turned into a meme, and now it’s become the glorious tattoo seen above for Penguins fan Phil Hammerstein.

How did we get here? Well, to say nothing of whether Phil Kessel eating hot dogs has any relevance whatsoever to his play (and he led the Leafs with 61 points that year, so maybe everyone should go on a hot dog diet), there are huge questions about if anything Simmons wrote about Kessel and hot dogs was true. The details Simmons provided were soon called into question by some sleuthing from Chemmy of Leafs’ blog Pension Plan Puppets, who figured out that amongst other things, Kessel’s listed address in Toronto was nowhere near the location Simmons mentioned. That led to plenty of criticism for Simmons, which he then tried to defend himself from on a radio show by saying he misunderstood what his hot dog source told him about the location of the stand. Simmons kept trying to defend the hot dog claim, though, saying “The fact that he went for the hot dogs is 100 per cent true” and “I’ll stand by that column for the rest of my career.” It’s notable that Simmons’ piece remains uncorrected online, even as per the location that he later admitted was wrong.

There were so many reasons to doubt even the modified Simmons story, though, including why this source who lived so far away had detailed knowledge of Kessel’s eating habits, how the source confirmed it was Kessel and not just another bearded white guy, why his new location was something without any known hot dog stands, and why no photographic evidence of this ever emerged. Simmons instead decided to get mad at bloggers for not contacting him for his side of the story, though, even though that side still had plenty of problems.

In any case, the hot dogs soon became a punchline, with Kessel’s new teammates in Pittsburgh making jokes about them (and then clarifying that they’d never actually seen Kessel eat one). Things got even better when the Penguins won the 2016 Stanley Cup, leading to photoshopped images of Kessel lifting a hot dog instead of the trophy. And now Hammerstein has immortalized Kessel, the Cup and the hot dog on his body. Why’d he do it? Here’s what he told Puck Daddy’s Sean Leahy:

Hammerstein spent three hours on Friday night at Pittsburgh Tattoo Company and had his artist friend Aaron Harding (who’s done a Kessel tattoo before) ink this masterpiece on his lower thigh. He wanted a 1950s pinup model-riding-a-bomb look but with our beloved Phil riding a hot dog and celebrating with the Stanley Cup and a bottle of mustard.

“Big Phil just clicked with Pittsburghers – chubby dude with a comb-over and penchant for street weenies, dry humor, bad breath, tries hard and loves the game,” Hammerstein told Puck Daddy on Monday. “Plus I have buddies in southern Ontario to troll.”

Well, he certainly accomplished that. Kessel led the Leafs with 61 points in 2014-15 before being traded, and he’s since put up 26- and 23-goal seasons in Pittsburgh, proving crucial to the Penguins’ Cup run last year. Of course, Toronto got some good players in that trade too, and Kessel got away from Simmons, so it’s arguably worked out for all parties. But we’ll always have the hot dog story, which the Sun doesn’t appear interested in correcting or retracting almost two years later despite Simmons himself admitting the location was wrong and others raising doubts about the rest of the story. (Meanwhile, Simmons himself has moved on to questioning Raptors’ players’ visits to casinos.) And even if they do eventually pull it down, tattoos like Hammerstein’s will always remind us of the hot dog story, a low point for Toronto journalism that’s become an excellent meme for everyone else.