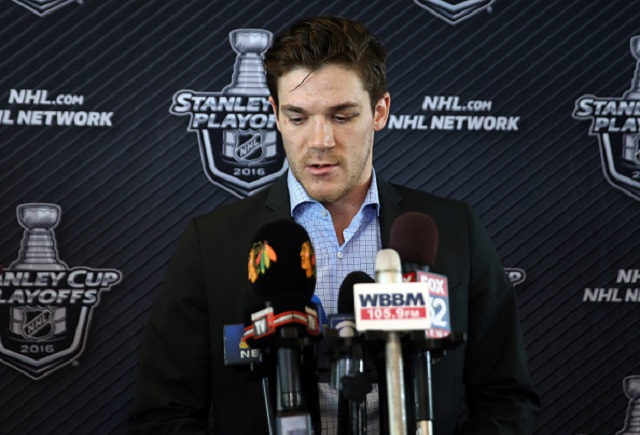 On Wednesday, Chicago Blackhawks forward Andrew Shaw was suspended one game for directing a homophobic slur at an official during Tuesday’s Game 3 of the first-round series between the Blackhawks and St. Louis Blues. There was also a $5,000 fine for an obscene gesture. Shaw had a full evening.

This is usually where you’d find the objection to insufficient discipline. But one game feels right. It’s understandable if you wanted more. Some will say Nashville beating Anaheim is the biggest upset of the first round but, to me, it’s Colin Campbell not screwing this up.

If not that, what about insight into Shaw, the culture of hockey and homophobia? As a straight person that hasn’t spent a lot of time around Shaw in his locker room, I’m not all that equipped there, either. Chris Hine of the Chicago Tribune, a gay man who covers the Blackhawks and knows Shaw as well as a reporter can, took care of that already.

“Even with all the restrictions in place in the modern sports media landscape, I have a bead on what kind of guy Shaw is after covering the Hawks for a full season. He doesn’t hide when the media enters the dressing room. He will stick around and talk for a few minutes and seems to enjoy the interaction. A number of times this season, I’ve gone to him just to talk and see how he’s doing. I always look forward to seeing him in the room and chatting.

“Certainly, I was disappointed when I saw video surface of Shaw using the slur. He was vilified on social media, but I don’t want to cast stones. He has a reputation around the league for being an irritant on the ice, but I don’t think he’s a bad guy. I also don’t think he hates gay people. I just want to help him understand why what he said packs such a devastating emotional wallop.”

Shaw apologized and if people who know him better than I do say he’s not a bad man and simply made a stupid mistake in a heated moment, that’s good enough for me. It may not be good enough for you, and that’s OK too. If he’s willing to learn from his mistakes, that’s all we can ask at this point.

But are others? Are fans willing to see it the way Shaw sees it now?

Twitter was a garbage fire of defenses for Shaw in the aftermath of the incident, and it’s doubtful anyone has changed their feelings on using words like Shaw did. So if all we can do is learn from this and try to be better going forward, let’s do that with some tweets over the past day or so and see if we can make a dent.

This is probably the attitude of some straight people. A homophobic slur isn’t going to land with you the same way it would for someone of the LGBT community. Perhaps in your mind, you think it’s on the same level as calling someone “dumb” or “bad at hockey.” That’s where you need to have critical thought.

Being dumb is a bad thing. Being bad at hockey, assuming that is your chosen profession, is also bad.

Why is being gay bad? Why is that an insult?

If you think it’s an insult, that’s the problem. Punishment is necessary here the way it is when you get home from work and your kid has drawn on your walls with a permanent marker. You want to correct poor behavior. If you don’t, chances are, you will find rainbows and unicorns on your walls again in the future. That’s what I would draw, anyway.

It’s not acceptable, even in the heat of the moment, to drop those words on people. That’s why punishment is necessary. It’s not an acceptable form of trash talk.

@JinTama @ChrisKuc So what. Homophobic slur? He called him a faggot. It's his opinion. What if called him a douche bag? PC bullshit.

Let’s start with Ninja Minion, one of the most dangerous minions in the world. He sort of has a point. Shaw is the only person to be suspended for a homophobic slur this year. Is he the only one to use a slur on the ice? God, of course not. If the camera hadn’t been on Shaw at that exact moment, would he have been suspended? Highly doubtful.

But, I mean, yeah: If you shout that at someone on camera, this is what will happen. And I’m pretty sure it’s bad publicity either way. It’s not like the NHL suspended Shaw and the entire world went, “Everything is great again!” Suspending Shaw isn’t a PR coup as much as it is the expected result.

As for Fat Rolly, yeah, that’s not “PC bullshit.” Also, a douchebag is defined as, “A sterile container which holds the fluid used for giving a vaginal douche.” That’s not really a bad thing. But if you think it is a bad thing and feel that it equates to a slur, then see the point in example 1.

“It’s his opinion” is also the weakest defense of a slur you’ll find here.

@MarkLazerus that's ridiculous . Guess guys should get suspended after every game then

The belief that a homophobic slur is dropped once per game is some serious projection. Again, no way Shaw is the lone guy to do this, but, again, yeah, if that happens in a game, that person should be suspended.

@RallyMD certainly a poor choice of words. However, people need to grow up. Ignore, and move on. He wasn't cursing a gay dude

Boy. Part of me wishes Shaw appealed the suspension, just so all these people could defend him at a hearing. “Your honor, all due respect, it’s not like the official was gay. No further questions. We rest our case.”

“People need to grow up” when it comes to things like passing laws allowing LGBT people the right to marry or use a bathroom with which they are comfortable. And those people are straight people that somehow can’t evolve to the point where two guys having a marriage license or someone identifying as transgender having a pee doesn’t make them freak out. That’s where the growing up needs to happen.

“Ignore and move on,” says the guy that isn’t affected by this. Again, life is easy in ways for straight people that we may never fully appreciate. No one uses “go have heterosexual intercourse” as an insult, so many can’t process someone using a sexual preference as insult, even if it’s not directed at a gay person.

Let’s say you’re Irish. A French person shouts Irish slurs at an Italian. You hear those slurs. Are you not supposed to be mad and/or uncomfortable in that setting because they were said to an Italian?

@MarkLazerus what he did was wrong, don't get me wrong, Mark. Inexcusable. But suspending him would set up a slippery slope, would it not?

Ah, the slippery slope argument, which should only be applied if you are climbing a slope and someone is coating said slope with oil while saying, “I argue that this makes it harder to climb the slope.”

I’m not even sure where this particular slope is slipping to. “If you suspend for this, what’s next? Suspended for swearing?” No, man. That’s not the same thing. Once we all get to a point where we all understand that being gay isn’t the same as calling someone a piece of crap, things will get way better in this world.

Ah, a situation like this isn’t complete without a First Amendment argument.

Here is how the First Amendment doesn’t work:

“Andrew, you will be disciplined for your words by your employer.”

Here is how the First Amendment does work:

“Andrew, you can not be arrested for expressing your opinion, as distasteful as it may be.”

The First Amendment doesn’t mean there are zero consequences for your opinions; it means the government can’t infringe on them. I know it seems like the NHL is a government-run organization devoid of any personality and littered with bureaucratic red tape, but it is a private business.

OK, we all know what Shaw said even when he was pretending not to remember saying it. Either way, he apologized for saying it and seemed to be sincere about it. That’s terrific. It’s the start we all need.

KRIS LETANG NEARLY DECAPITATING VIKTOR STALBERG HAS LITERALLY NOTHING TO DO WITH WHAT SHAW SAID!

“Your honor, did O.J. decapitate his wife and another man? Hey, nobody saw it and despite all this evidence, we can’t say for sure. But what about this white-collar crime that occurred on Wall Street at the same time? What about that?”