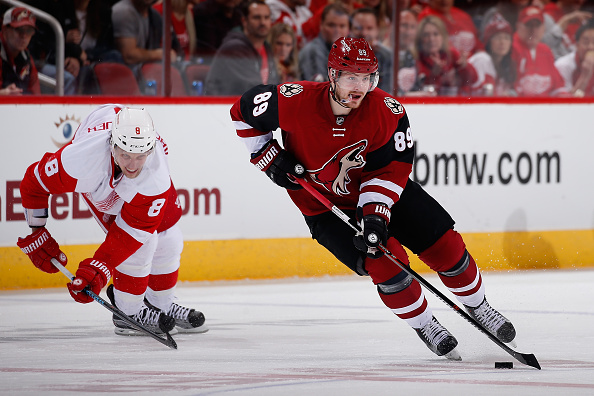 The trade deadline isn’t what it used to be and today’s lack of deals should be enough evidence. NHL teams aren’t waiting until the final hours to strike a deal to improve their club, as the big moves happen days before the clock strikes zero. Major transactions may not happen on deadline day anymore, but teams still were fairly active in the week before the trade freeze began.

Here are the winners and losers of the trade deadline.

Maple Leafs management should be firmly patting themselves on the back for the excellent work they’ve accomplished. They signed a bunch of one-year fliers this offseason with the intention of dumping them at the deadline for picks and they accomplished their goal. Nick Spaling, Dion Phaneuf, Roman Polak, James Reimer, Daniel Winnik and Shawn Matthias were all expendable, and the Leafs did well to land a truckload of draft picks and prospects for them. If it meant the club had to take on additional salaries in Brooks Laich or Jared Cowen, so be it.

The Leafs also win by opening roster spots for younger players, such as talented young forwards William Nylander, Kasperi Kapanen and Nikita Soshnikov, all of whom are expected to play. The Leafs are doing a rebuild the right way which should have fans in Toronto excited for the future.

The Blackhawks went all-in again, acquiring Andrew Ladd from the Winnipeg Jets, while adding some solid depth pieces in Dale Weise, Thomas Fleischmann, and Christian Ehrhoff. Chicago, who lead the West with 83 points, already has a stacked roster, so to improve it further seems unfair. The cost was high, as they shipped Marko Dano, a first and a second-round pick, but it’s worth the price of repeating as Stanley Cup champions.

The Flames made a nice move by acquiring Hunter Shinkaruk from the Vancouver Canucks for depth piece Markus Granlund, but Brian Burke and company really outdid themselves today.

Calgary had one of the most attractive trade chips on the market with Kris Russell, a defenseman who passed the eye test with flying colors but had ugly outlier numbers. One team was going to break the bank to acquire him, and the Dallas Stars did that, and then some.

The Flames acquire defenseman Jyrki Jokipakka, prospect Brett Pollock and a conditional second-round pick for Russell. You could argue the pick would be enough of return, but getting a defenseman with arguably equal value and a decent prospect is icing on the cake. But wait, there’s more. As ESPN’s Pierre LeBrun reports, the condition on the pick is if the Stars make the conference finals and Russell plays 50% of the games in the first two rounds, it’s a first round pick. If that happens the deal goes from heist for Calgary to all-timer.

I could see how some may view the Panthers as losers, but I liked what they did.

The Panthers sit atop the Atlantic Division and have exceeded expectations all season. It made sense for general manager Dale Tallon to be a buyer, but he took a more measured approach in doing so. The Panthers shipped out four draft picks (a second, third, fourth and sixth-rounder) staggered across the next three years to acquire Teddy Purcell, Jiri Hudler and Jakob Kindl. Florida also traded Brandon Pirri to the Anaheim Ducks for only a sixth-round pick, in a move I’m not crazy about, but they were eager to move him.

None of those players are game-changers, but Purcell and Hudler are excellent middle-six forwards, and Kindl can provide depth at defense. Tallon paid a reasonable cost to improve his team without mortgaging the club’s future. Not a surefire win, but a nice day.

Laich played nine seasons with the Washington Capitals, and to get traded to the struggling Toronto Maple Leafs from the first-place Capitals due to his high salary must suck.

Me and u together since my 1st year..We make this team together! Im gonna miss u bro good luck to u!Gonna miss u! ❤️ pic.twitter.com/feKvUGV6TK

The Blues have come up short time and time again in the playoffs, and after another strong season, the club did the bare minimum at the trade deadline to assure that doesn’t happen again. The team acquired goaltender Anders Nilsson for a prospect and a fifth-round pick – a move that helps their organizational depth and nothing more. St. Louis has a great group of players, but not adding to them may prove to be a costly mistake.

The Colorado Avalanche made one of the worst deals of the day, giving up former first-round pick Connor Bleackley, prospect Kyle Wood and Alex Tanguay to the Arizona Coyotes for Mikkel Boedker.

First off, the cost is pretty ridiculous for a player of Boedker’s caliber. Tanguay is probably around the same skill level, so to give up two decent prospects as well is baffling. Bleackley hasn’t exactly torn in up with Red Deer in the WHL, but he was still one of the better prospects in a weak Avalanche prospect pool. Wood, a third-rounder in 2014, is a solid defense prospect, and exactly the type of player Colorado shouldn’t have traded.

The big no-no for Colorado is overpaying on a win-now move, which makes no sense given the Avalanche are likely going to miss the playoffs. It’s hard to understand this one.

The Canucks started trade deadline week off with a whimper, by trading former first-round pick Hunter Shinkaruk to the Flames for Markus Granlund. It was the latest head-scratcher by GM Jim Benning. It was hard to peg whether he thought his mediocre Canucks were buyers or sellers on deadline day, and the answer was neither.

The club seemed handcuffed by Dan Hamhuis, one of the most attractive trade chips, who’s no-trade clause may have prevented them from making a deal. Still, the fact the Canucks went silent is hilariously puzzling. Instead of piling assets for pending UFAs like Radim Vrbata and Matt Bartkowski, Benning will likely watch them walk for nothing. What a horrible time to be a Canucks fan.

Can confirm Jonathan Drouin was NOT traded before the deadline

The suspended forward and Tampa Bay Lightning general manager Steve Yzerman hoped today would bring resolution to the awkward situation, but no deal was to be made. Yzerman was looking for a good return for the talented youngster and couldn’t find one, and in the end, doesn’t lose much for waiting until a later date to make a move.

Meanwhile, Yzerman extended an olive branch, but it’s possible Drouin won’t play hockey for the rest of the year and will have to wait out quite the uncomfortable situation.

Stars general manager Jim Nill seems like a very smart hockey mind, but he was absolutely fleeced by the Flames to acquire Russell. Dallas desperately needed a defenseman, and he paid an extraordinary price to acquire the wrong one. Tough day.