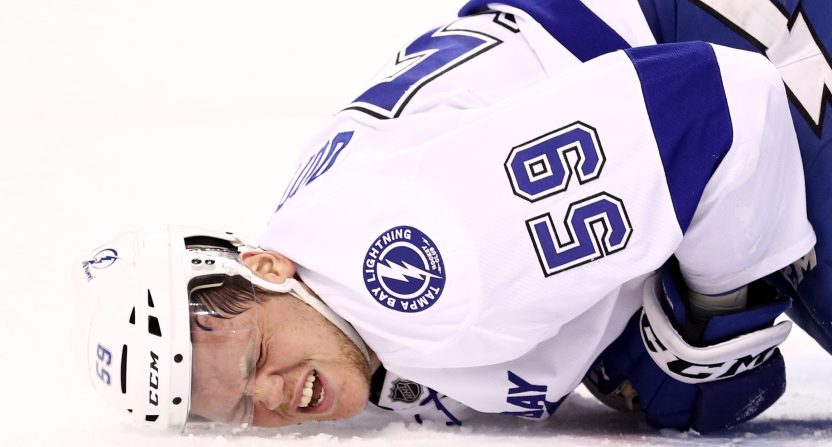 Welcome once again to This Week in NHL Stupid, where we track the ugly, the silly, and the just plain stupid in the world of hockey.

We’ve been doing this column every week during the regular season, which winds down on Sunday. So you might think that we are rehashing the greatest moments in this space when you start reading it. But it’s just that the stupid which we usually focus on is making news yet again. Everything old is new again as we dive into the final regular season week of NHL stupid:

The NHL officially pulls out of the Olympics

Well, the league made it official. No more posturing this time: The NHL will not send its players to South Korea for the 2018 Winter Olympics. The league will sacrifice the chance to market their young stars to the other side of the world in exchange for social media content for two weeks. But what else will this decision cost them in the future?

Goodwill with the NHLPA? I think it has already cost them that.

Perhaps a legal fight when Alex Ovechkin or perhaps even Henrik Lundqvist decides that they want one last shot at gold in February and are willing to miss three weeks of NHL action?

Lingering resentment from a young star like, oh, I don’t know, the biggest young star the league has in Connor McDavid?

Who knows? Maybe even a strike or a lockout as the NHLPA digs in its heels to try to win the next bargaining agreement.

All for a shortsighted decision made because of money. Penny wise, pound foolish.

Stop me if you’ve heard this one before: Brad Marchand made a dirty play.

This time, Tampa’s Jake Dotchin was the victim of Marchand’s antics, a spear to the groin in this case. Marchand was suspended a couple of games for the act, which is great. Until you realize that Marchand has been the source of two other questionable plays this season: A slew foot on Niklas Kronwall, and another slew foot on Anton Stralman. Sure enough, the lack of suspension on either play has emboldened Marchand, who is too good for this nonsense now, to do it whenever he feels it appropriate.

He finally got dinged for it. Perhaps decisive action by the league earlier in the process would have saved Jake Dotchin’s groin. It also might have prevented future action from Marchand, who perhaps thinks that two games late in a season where the Bruins have already made the playoffs was totally worth the play on Dotchin. Who knows? But Marchand is fourth in the league in points. Why he feels the need to keep plays like this in his game is beyond me. Except that the NHL continues to enable him.

Well, that’s it for this regular season. We hope you enjoyed all the stupidity that this league had to offer this year and we hope to return next season for all new stupidity. Or maybe the same stupidity. From the same people.