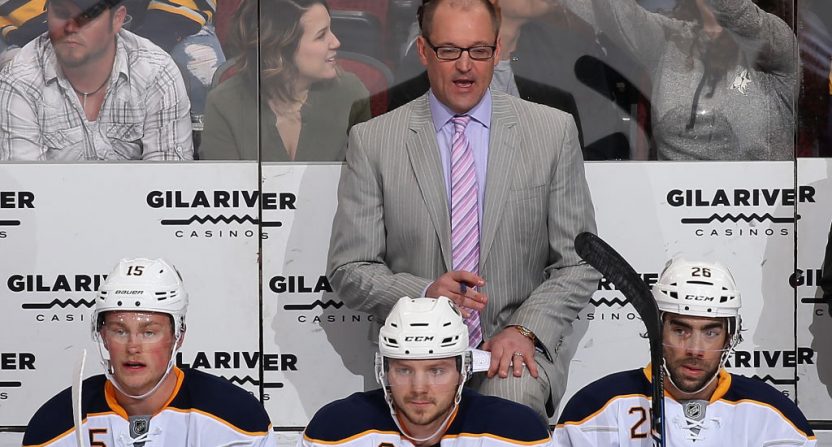 A day after a rumor circulated saying that Jack Eichel wouldn’t re-sign with the Buffalo Sabres if Dan Bylsma was the coach, Bylsma and general manager Tim Murray have been relieved of their duties.

Following that report, we looked at the frustration that Eichel may be feeling in Buffalo as he watches his young peers make the playoffs. It sure didn’t help that he also missed out on a $2 million bonus by a fraction of a point.

Eichel’s anger not withstanding, the way that the Buffalo Sabres have been built is an odd, odd tale. GM Tim Murray was brought over from the Ottawa Senators and was viewed as an “analytics guru” that could take advantage of any market inefficiencies.

Murray’s first order of business was selling off the team’s good players and tanking for multiple seasons. While they actively tried to suck, the Sabres never got the first overall pick. They never got the prized jewel in the draft class. Instead of getting Aaron Ekblad and Connor McDavid, they ended up with Sam Reinhart and Eichel. Eichel is a great player in his own right, but ending up with that haul after long-term tanking may have been the beginning of the end.

Ted Nolan was fired as coach after helping the team intentionally tank, and Bylsma was brought in as his replacement. (He was Buffalo’s fallback after the Sabres struck out trying to nab Mike Babcock.) Bylsma had a great track record coaching the Pittsburgh Penguins to a Stanley Cup. He showed his merit multiple times by getting the Penguins in the playoffs despite injury-ravaged seasons.

The pairing of Bylsma and Murray actually seemed like a winning group. However, it all began to fall apart during this past offseason. The Sabres’ defensive core needed help in the worst way.

Other than Rasmus Ristolainen and Jake McCabe, two young defensemen who have only had middling careers thus far, Buffalo didn’t have much help. Murray traded Mark Pysyk for Dmitry Kulikov and multiple draft picks. It was yet another example which showed that the management group had no idea how to evaluate defensemen.

This past season started with Eichel on IR and from there, the Sabres never really had a chance. They played great after his return, but it was too late. The writing was on the wall as the team missed the playoffs again.

GM/coach ideas for the Sabres off the top of my head: pic.twitter.com/SiVspbKQAS

Decisions needed to be made, but the timing of it all puts the owners of the Sabres, Terry and Kim Pegula, in the crosshairs. After buying the team in early 2011, the Sabres have seen four coaches come through their doors. As they begin to look for a fifth, the fans should have almost zero confidence in ownership to make the right decision. The Pegulas come off as trigger-happy and not level-headed, a bad reputation for any team ownership to have.

The base of the Buffalo Sabres is great, they have a cornerstone player to build around and a hockey-obsessed city that is desperate for a winner. But a continuously volatile situation could make for an undesirable job in Buffalo.

Metaphorical landmines are all over the place in Buffalo. Good luck with finishing the rebuild.