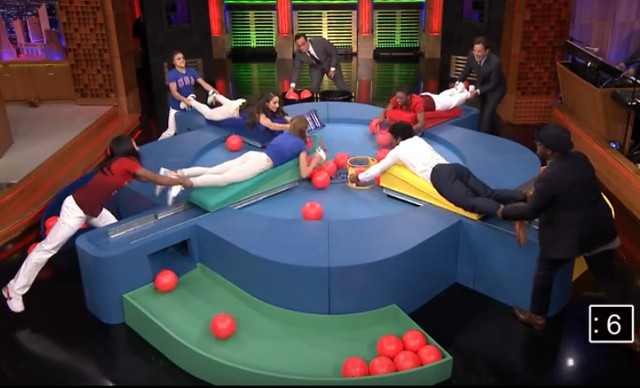 During the 2016 Olympics, U.S. gymnasts Aly Raisman and Laurie Hernandez were somewhat in the back as Simone Biles became one of the top stories in Rio and won all-around gold. In a recent appearance on The Tonight Show, Hernandez and Raisman got some revenge on their U.S. teammate.

The Final Five — Biles, Raisman, Hernandez, Gabby Douglas and Madison Kocian, who collectively picked their team name in honor of retiring national team coordinator Martha Karolyi  — competed in a game of Hungry Hungry Humans (a giant-sized version of Hungry Hungry Hippos) while appearing on The Tonight Show with Jimmy Fallon. The gymnasts competed alongside Fallon, Donald Glover and rap artist Tarique in the board game. The game included much smack talk and a close final result. In the end, the team of Raisman and Hernandez came in first, followed by Douglas and Kocian. Biles took third while competing with Fallon.

Raisman definitely seemed in control while competing. Her height also has to have been a big factor in the victory. Biles couldn’t leap off of any vault to assist her attempt to win. Fallon was also likely at a disadvantage by wearing a shirt and tie during the contest.

The Final Five’s appearance on The Tonight Show is a part of a victory tour the team is taking following its outstanding performance at the Olympics. Since the team dominated the floor, Biles and her teammates got to meet her celebrity crush — Zac Efron.

Since being back in the U.S., Raisman has been asked out by a member of the Oakland Raiders. The team has also gotten a long look at New York. They’ve gone to see “Hamilton” and the Empire State Building during the free time they have between public appearances.