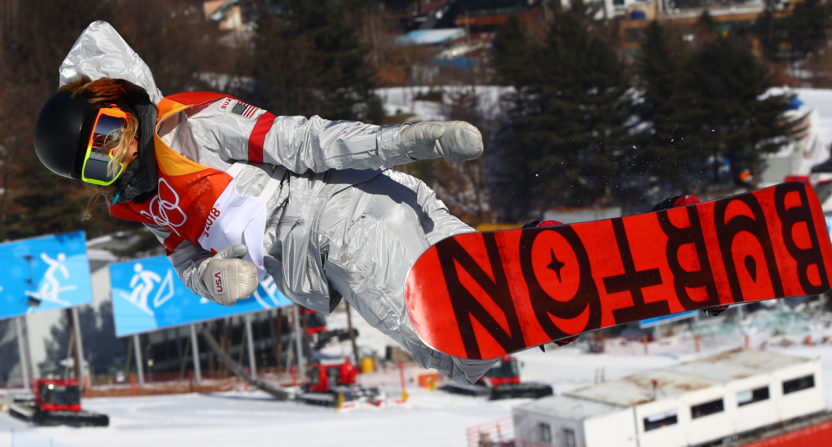 In 1997, the Winter X Games made their debut at Big Bear, California. The event brought so-called extreme winter sports like the halfpipe and slopestyle into the mainstream thanks to their partnership with ESPN.

It’s been a disappointing 2018 Winter Olympics for Team USA in the medal count as the Americans sit far behind Norway (33 medals) at the top of the medal table. With a total of 16 medals, it’s going to take a minor miracle for Team USA to top the medal table and a huge turnaround to even make the podium in front of Germany (24 medals) and Canada (21 medals) by the end of the PyeongChang Olympics. And the truth is it could be an even bleaker picture without the very real influence of sports more associated with the X Games.

Out of the 16 medals won by Team USA thus far, 11 of them have come in events that are very new to the Olympic scene, starting in 1998 or later. For some of these events, the specific competition might be relatively new while the sport has been around forever (like the team figure skating event or team sprint cross country).

However, it’s clear from the medal count that Team USA athletes have been far more successful in what could be classified as more non-traditional disciplines.This includes the wide majority of gold won by Team USA athletes in Korea. Of the six gold medals won by Americans in PyeongChang, four of them have come in events that are more traditionally associated with the X Games in slopestyle and halfpipe.

Below is a tally of the USA medal winners from PyeongChang and when the event was introduced as an official Olympic sport.

Snowboarding and freestyle skiing alone have accounted for almost 50 percent of the medals won (7-of-16) by Team USA. This includes a clean sweep of the gold in men’s and women’s slopestyle and halfpipe and likely more medals to come in the respective big air competitions.

It’s more than just the medals, though. When it comes to the popularity of the Olympics, it often depends on how well the top American athletes are able to connect with viewers at home. The top superstars of the Olympics like Michael Phelps can transcend their individual sports and become household names. Only the NFL can reasonably draw as consistently large an audience as the Olympics can on a nightly basis. But like anything else in American culture, the Olympics needs starpower that fans and viewers alike can relate to on a nightly basis.

Could be down for some ice cream rn

And it’s in the X-inspired sports like snowboard and freestyle skiing where Team USA has discovered its newest and biggest stars.

The story of 17-year-old halfpipe sensation Chloe Kim was the breakout star of the first week of the Olympics. With the way that she dominated the rest of the competition, she could be a winter sports mainstay for a decade plus to come. And with her personality shining on social media, she is already becoming a crossover mainstream star, appearing on the cover of Sports Illustrated. Who can’t relate to someone tweeting about wanting some ice cream in the midst of winning a gold medal?

At the other end of the spectrum, Shaun White’s third gold medal in what could have been his last Olympic halfpipe competition may have been the best pure sporting theater of the Olympics. White laid down a flawless run scoring a 97.75 with the gold medal on the line in a thrilling halfpipe competition, surpassing Ayumu Hirano’s 95.25. Nevertheless, White’s victory has also been overshadowed by sexual harassment allegations from 2016.

Without these moments in the halfpipe as well as golds won by Gerard and Anderson in slopestyle, it’s tough to say where the real highlights have been for Team USA in PyeongChang outside Mikaela Shiffrin in alpine skiing. She has been the only other athlete who has featured in a big way in PyeongChang by winning gold for Team USA.

There are still many team competitions to be decided and if either the men’s or women’s hockey teams win gold, it’ll be a huge moment. The USA did get a decent medal boost on Wednesday with an upset win in cross-country skiing and Lindsey Vonn’s medal in the downhill.

But to kick off Week 2 of the Winter Olympics, what was it that NBC was showing live in primetime to millions of viewers across the country? Qualifying runs in the women’s snowboarding big air competition. Twenty years ago, maybe even 10 years ago, that would have been an insane thought for Olympic primetime, normally dominated by traditional sports like alpine skiing and figure skating.

If they were once thought of as merely extreme sports or gimmicks to attract young fans to the Olympics, that’s not the case anymore. Slopestyle, halfpipe, and big air are now some of the main events of the Olympics with the biggest stars and the most gold for Team USA. Who could have seen that coming at the first Winter X Games all those years ago?