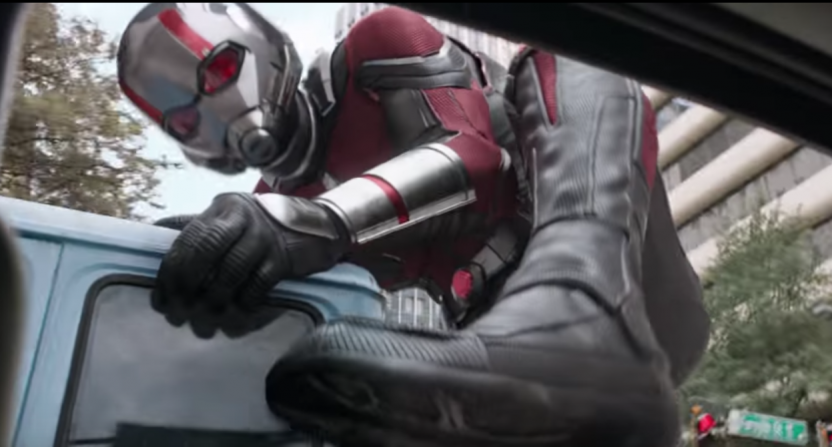 Marvel movie fans need a palate cleanser after the drama of Avengers: Infinity War. Many of us are still processing everything that happened in that film — especially at the end. But the Marvel Cinematic Universe keeps on rolling. Next up on the slate is Ant-Man and The Wasp, and a new trailer is here to give us a boost for the summer.

Ant-Man is kind of the unlikely hero of the Marvel Cinematic Universe. He headlined his own movie, but isn’t an iconic figure like Captain America, Iron Man or Spider-Man. Yet he’s always been a key part of the Avengers, at least in the comic books. Not so much in the movies. The more comedic tone that comes with this reluctant superhero is a nice change-up among Marvel’s epic blockbusters.

But with a character better suited for superheroics like The Wasp, it looks like we’ll see more action this time around. Everything looks more confident and assured. That surely applies to director Peyton Reed, who was on this movie from Day 1, instead of taking over for Edgar Wright. Even from just a trailer, it’s more apparent that this is his movie.

We’re just over two months away from Ant-Man and The Wasp hitting theaters. In the meantime, here are our takeaways from the new trailer.

Above all, Ant-Man is a dad 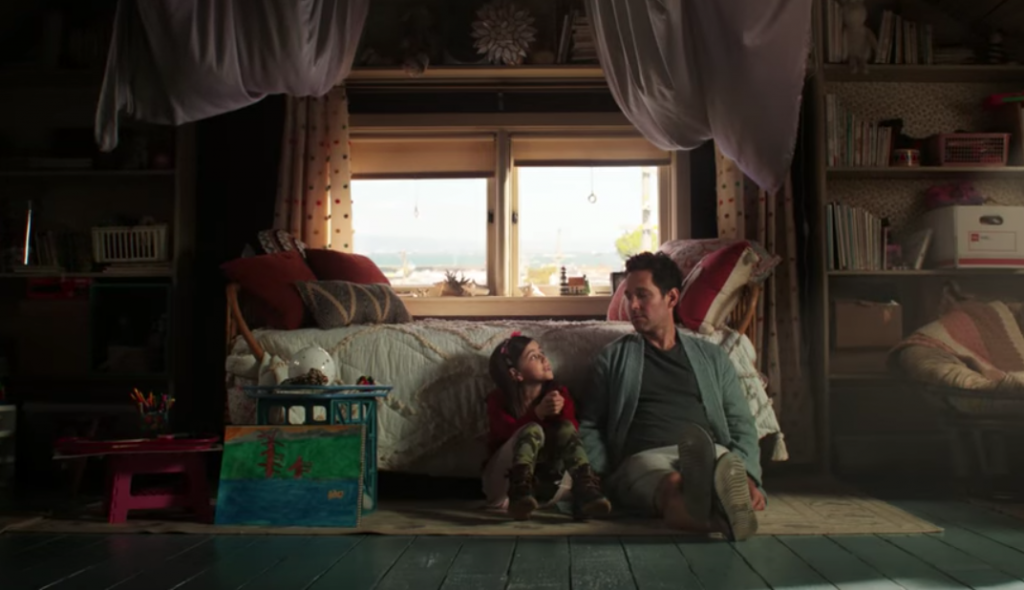 If you saw Avengers: Infinity War, you heard the brief explanation for why Ant-Man (and Hawkeye) didn’t join the battle against Thanos. The first scene of the trailer seems like a reference to that. Although it also works as an excellent introduction and a reminder of what sets Scott Lang apart from his Marvel superhero counterparts: He’s always thinking about his daughter, Cassie.

Ant-Man and The Wasp almost certainly takes place after Captain America: Civil War, with Lang once again a free man (sort of). That obviously doesn’t stop him from taking the Ant-Man suit out for a spin to help out The Wasp and Hank Pym against whatever nefarious scheme is taking place.

Approximately two years occurred between Civil War and Infinity War, according to director Joe Russo. That gives Ant-Man and The Wasp quite a bit of room to work with. Maybe it takes place during the Avengers’ blockbuster conflict. But there will almost certainly be some references toward what’s to come in the Marvel Cinematic Universe storyline.

Should this be titled “The Wasp and Ant-Man”? 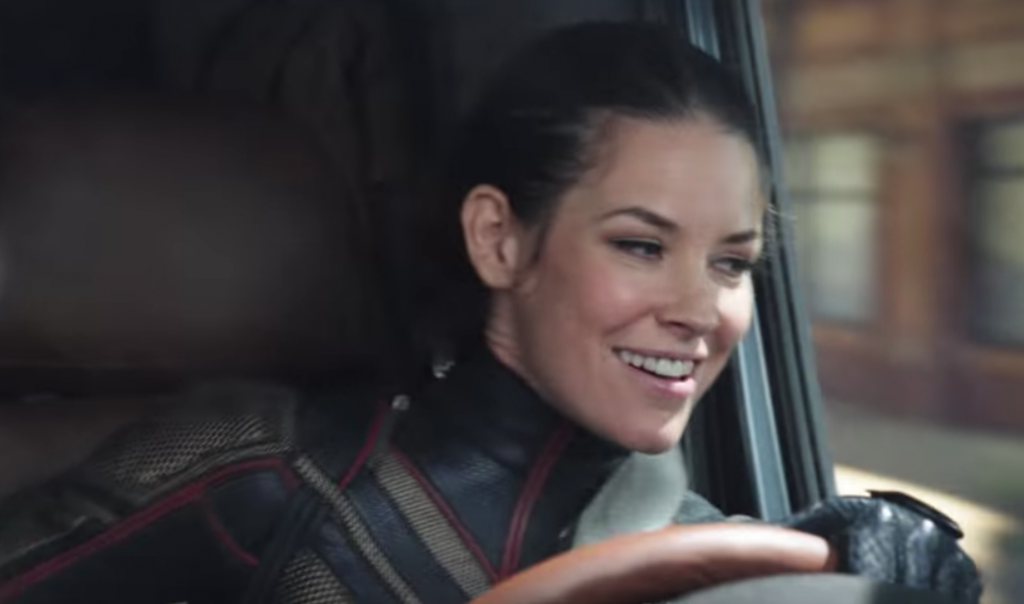 The Wasp, is the true badass of this superhero pairing. But we already knew that Hope Van Dyne (Evangeline Lilly) knew how to use her father’s technology far more than Lang does. The only reason she didn’t try to steal the Yellowjacket suit from Darren Cross is because her father didn’t want to risk her getting hurt or killed in the process.

But Hank Pym got over that and Hope is now out in the field — and with upgraded technology, including blasters and wings. (That will surely increase Lang’s inferiority complex about playing superhero.) The Wasp is also smooth while Ant-Man stumbles. While Lang tries to figure out how to use a freight truck as a scooter, Hope is taking out bad guys with salt shakers. (She can also dispatch a SUV full of four thugs with ease.) 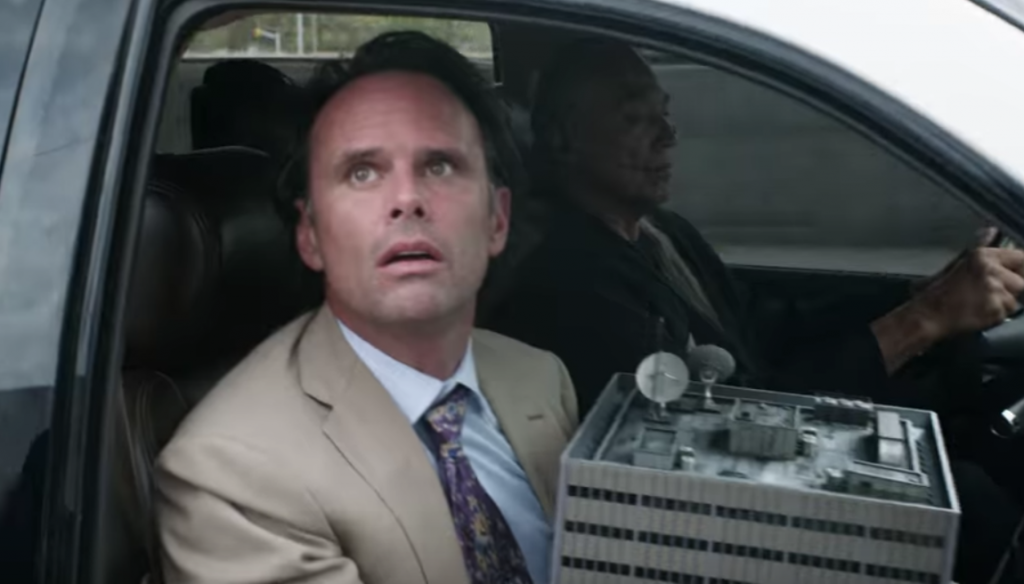 OK, we knew Walton Goggins was in this movie based on news reports. Though we didn’t know much about his role as Sonny Burch. Based on what we see here, however, Goggins is a bad guy. And really, would you cast Goggins for any other kind of role? He’s so good as a villain (seen most recently as such in Tomb Raider)!

Is he the main villain? That remains to be seen. But if he’s the guy pulling the strings behind the scenes, kind of a replacement for Darren Cross from the first Ant-Man film, Goggins is a great choice.

Luis and the crew have gone legit 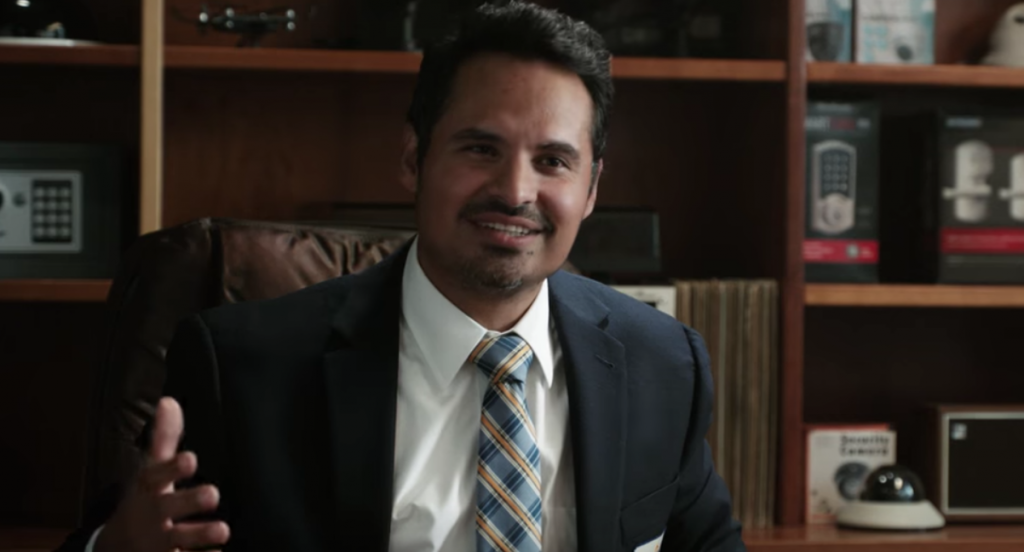 Arguably the most entertaining aspect of Ant-Man was Luis (Michael Pena), Lang’s best friend and former cellmate who helps with whatever job is being planned. What made Luis particularly hilarious was his storytelling, which never got right to the point because he had to include every detail, such as his taste for red wine abstract painting. At least one Luis story has to be in the new movie, even if it’s a storytelling gimmick that shouldn’t be overused.

But Luis, Kurt (David Dastmalchian) and Dave (T.I.) have apparently created their own business while Lang was off playing superhero with the Avengers (and dad to Cassie). And what better business for a trio of thieves to start than home security? See all the locks and cameras behind Luis?

Why does Hank Pym need the threesome’s help? Probably to steal something, like that miniaturized building everyone has their hands on. Yes, Luis — Hank remembers that you helped rob his house. 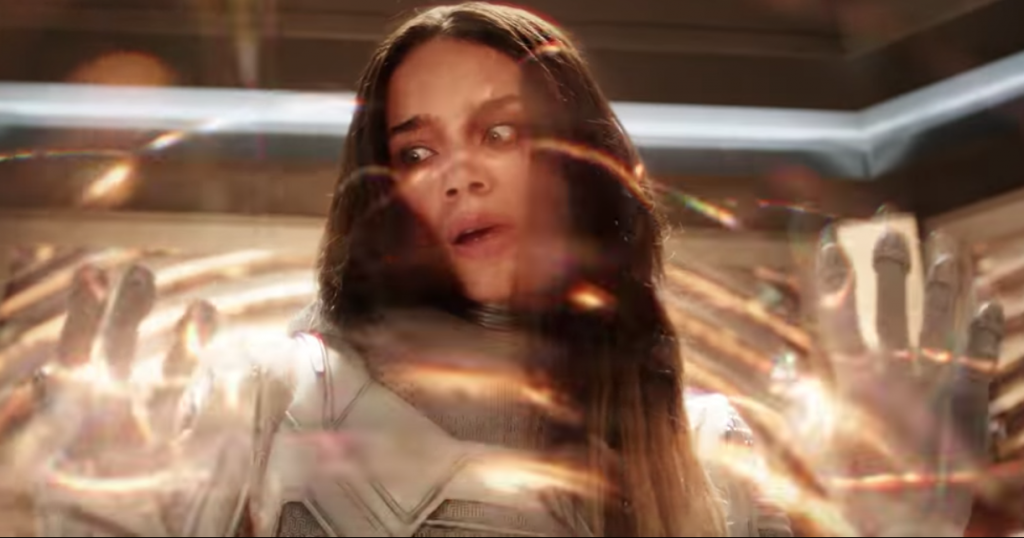 This trailer provides our best look yet at Ghost (Hannah John-Kamen), the presumed bad guy of the story. According to Luis, she uses the same technology that allows Ant-Man and The Wasp to change size, but learned how to access the Quantum Realm, the sub-atomic dimension where Pym’s wife (and Hope’s mother), Janet Van Dyne, was lost. (Speaking of which, we still haven’t seen Michelle Pfeiffer yet.)

How is Ghost able to go back and forth into the Quantum Realm to pass through objects without getting lost in that dimension? She might have had some guidance. Maybe Pym made it easier while trying to find Janet. Is that where Sonny Burch comes in? Or did she learn how to use Pym’s technology in a way that its creator never tried? 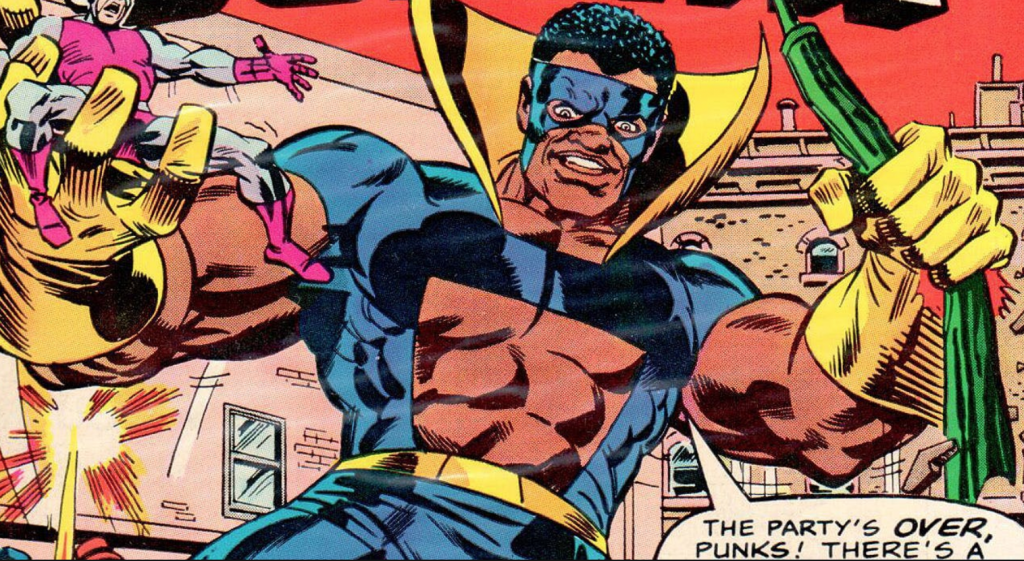 It’s fun to see Laurence Fishburne as Bill Foster, who Marvel Comics fans will know as Black Goliath, Goliath or Giant-Man, depending on which stories they read. Will we see Fishburne get big? At least 21 feet high? Higher than the 65 feet Lang boasts about? (We can safely assume he won’t wear any of the ridiculous, chest-baring costumes artists gave Goliath in the comic books.)

Fishburne has taken small roles recently in movies like Man of Steel, Batman v Superman and John Wick 2. So we shouldn’t assume that he won’t have a big part here. But come on, Marvel — let’s do this. Let Fishburne get big!

Infinity War will never have this 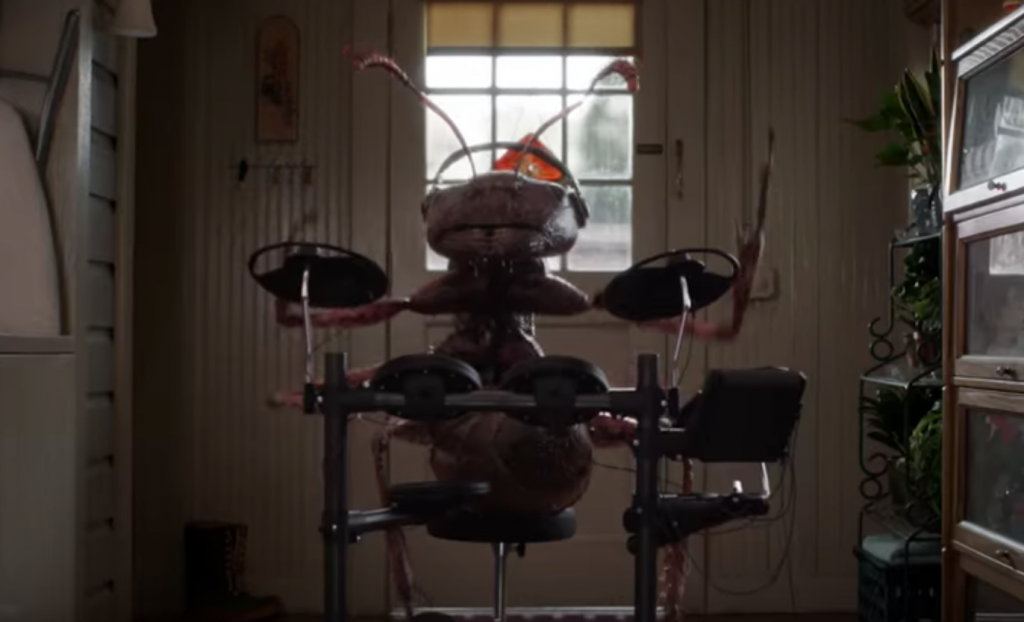 Yep, that is a giant ant playing an electronic drum kit. The new suits Iron Man and Spider-Man show off in Infinity War just don’t seem as impressive. But maybe they’re a bit less disturbing than enlarged insects. Learning the story behind this is just one of many reasons to see this movie. [UPDATE: It’s cropped in our screen cap, but if you watch this part of the trailer closely, the ant’s role — and its connection to what was revealed in Infinity War — become apparent.]

By the way, why isn’t Adam Ant doing any music for these movies? Too obvious? Just not the type of gig Mr. Ant would be interested in? Not the way Marvel likes to do things? Just curious.

Ant-Man and The Wasp will appear in theaters on July 6.