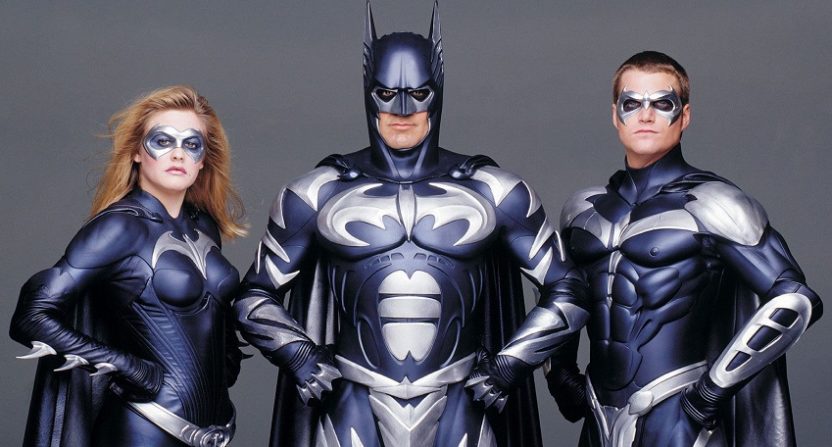 It takes a lot to make a truly awful movie. The annals of Hollywood are saturated with bad ones. But to be memorably awful is an achievement for the precious few. Plan 9 from Outer Space (1959) is the Citizen Kane of bad movies. Showgirls (1995) is ridiculous. Crash (2005) is offensively terrible.

However, you can make a strong case for one calamity as the mother of all bombs. Happy 20th anniversary, Batman & Robin (1997): the worst blockbuster ever made and on the short list of worst pictures ever. Released on June 20, 1997, the odor of its failure still lingers. Its current rating on Rotten Tomatoes is a cringe-worthy 10%.

Say what you will about the previously mentioned turkeys. Plan 9 from Outer Space and Showgirls both developed cult followings for their trashiness. Crash won (unbelievably) three Oscars, including Best Picture (WTF!) Nobody — and, I mean nobody — thinks Batman & Robin is an enjoyable watch. Even director Joel Schumacher – the Edward Smith of this Titanic.

“Look, I apologize,” he said. “I want to apologize to every fan that was disappointed because I think I owe them that.”

To the millennials not familiar with Batman & Robin, let me put it in a context you can understand. Imagine Ryan Gosling, Emma Stone, Dwayne Johnson, Scarlett Johansson and Zac Efron starring in the most anticipated summer movie. Then imagine it being a spectacular critical flop and box office disappointment so jarring that it ruined careers and almost mortally wounded a genre and franchise.

That’s the legacy of Batman & Robin.

From the outside, no one could have predicted this. This wasn’t Schumacher’s first superhero rodeo. He had directed Batman Forever, the second-highest grossing film of 1995, behind only Toy Story.

Expectations for Batman & Robin were ratcheted up when the cast was announced: George Clooney as Batman, Arnold Schwarzenegger as Mr. Freeze, Uma Thurman as Poison Ivy, Alicia Silverstone as Batgirl and Chris O’Donnell as Robin. Back in 1995, that was as much movie star firepower as you could pack into one movie. The name Schwarzenegger was instant box office gold. Some people pegged Clooney to be next great American actor, coming off ER. Silverstone and O’Donnell were rising stars. And Uma Thurman established her acting chops in Pulp Fiction.

As can’t-miss-casting goes, this was as good as it gets – particularly Clooney. Everyone thought for years that he would be a natural as Bruce Wayne/Batman. He was charming, good-looking, suave. Everything you want a leading man to be. Clooney took over the Caped Crusader role from Val Kilmer who was just OK in Batman Forever. Surely Clooney would be the most charismatic Batman of them all.

The biggest get was Schwarzenegger, one of the top box office draws of the 1980s/1990s. With hits in the 1990s like Total Recall, Terminator 2: Judgment Day, Kindergarten Cop and True Lies, Schwarzenegger seemed like a natural fit to bring his unique brand of muscle, wit and action star savvy to the Batman franchise.

This was supposed to be the blockbuster vehicle that drove itself right to the bank. But a funny thing happened – and it should serve as a cautionary tale to all moviemakers. It takes more than stars, a built-in audience, a director and a hefty budget to make a good film. You must first have a decent script to serve as a platform. Without it, all you have are people running around in costumes with explosions in the background.

Written by Akiva Goldsman, Batman & Robin’s script was dog poop on a stick. The plot and dialogue were bad enough to wreck George Freakin’ Clooney. He delivered his terrible lines with all the conviction of someone reading a prepared statement in a hostage video. Perhaps he knew that his career could possibly be taking a steep descent into hell.

The movie begins with Batman and Robin getting suited up. Robin, eyeing the Batmobile, says the first words in the film: “I want a car. Chicks dig the car.” Batman responds by saying, “This is why Superman works alone.”

Clooney’s lines were bad. Schwarzenegger’s were worse. Mr. Freeze’s super powers apparently included the ability to only speak in puns, quips and one-liners. Some of it didn’t even make sense.

“In this universe, there’s only one absolute… everything freezes!”

The protagonist and antagonist were putrid. And they weren’t helped out by insipid, annoying, cardboard cutout supporting characters. The wonderfully funny people at Screen Junkies describe Robin perfectly as “a naggy sidekick you and Batman will both want to punch in the face.” Thurman’s Poison Ivy sounds like a bad Mae West impression. And Batgirl is… well, she’s just sorta there.

The most believable character: Bane — mainly because he speaks only in grunts.

When the film debuted, Pulitzer Prize-winning critic Roger Ebert wrote that Batman & Robin “is wonderful to look at, and has nothing authentic at its core.” He added, “It makes absolutely no difference who plays Batman: There’s nobody at home.”

According to boxofficemojo.com, a film with a $125 million budget grossed $238,207,122 worldwide. In a vacuum, that looks good, but it was way short of expectations. It was the least profitable Batman movie at the time. For comparison, Batman Forever, with a budget of $100 million, grossed $336,529,144.

The fallout from Batman & Robin was cataclysmic. Clooney and Thurman were basically the only main actors to successfully emerge from the train wreck. O’Donnell and Silverstone never recovered. For Schwarzenegger, it marked the beginning of the end for him as a headline moneymaking star.

A follow-up movie, “Batman Unchained,” was cancelled and the Caped Crusader disappeared from live-action Hollywood for years. There wasn’t another Batman movie until 2005 when Christopher Nolan rescued and revitalized the franchise with Batman Begins.

Who deserves the blame for Batman & Robin? Ultimately, the person most directly responsible for the quality of the film is the director. It’s his job to bring everything together. He must guide the actors, adjust the script as needed and assemble all the elements into something you want to watch.

Schumacher accepts his share of the blame but also said that he felt pressured to do the film. That still doesn’t excuse him for making a movie that included bat nipples and a Bat credit card.

“Schumacher undermined the entire franchise by featuring a nippled gimp who paraded around the set with no plot, lame one-liners and a wasted effort from Clooney,” said John Lewis of Louisville television station WDRB. “We fans wanted a continuation of the 1989 original. Instead, we got a $125 million episode of the 1960s TV series.”

Maybe the Batfamily had nipples in Batman & Robin cuz they were cold. They should've had a joke in the script.

Clooney keeps a good sense of humor about his Batman experience. A few years ago, he said. “I thought at the time it was going to be a very good career move. Um, it wasn’t.”