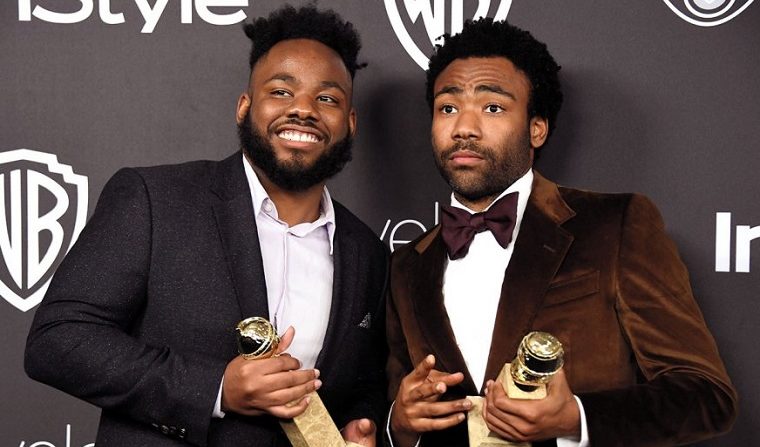 Marvel movies always make it worth staying in your seat during the credits with extra scenes that either add a little something to the film you just watched or allude to the next blockbuster coming up in the Marvel Cinematic Universe. Black Panther is no exception, giving fans two post-credits scenes that accomplish both of those objectives.

But if you were paying attention to the credits themselves, especially toward the end when several thank yous were given, you may have noticed Donald Glover and his brother Stephen among those receiving gratitude from director Ryan Coogler and the entire production. Though Donald might be best known for his acting, notably his breakout role on Community, and his Grammy-winning music as Childish Gambino (a persona he says he’s retiring), he and Stephen are the creative forces behind the FX series Atlanta.

Glover is an executive producer for the show and stars as Earn Marks, a Princeton dropout who manages his cousin, an aspiring rapper trying to make it in the competitive Atlanta rap scene. He’s also a writer for the series along with Stephen. And the two were tapped by Coogler to give the Black Panther script (written by Coogler and Joe Robert Cole) a look to try and add some more jokes to the dialogue.

Collider’s Steve Weintraub asked Coogler about the acknowledgement for the Glover brothers in an interview earlier this month.

“Donald and Stephen actually gave me notes on a draft; they came in and read,” Coogler explained. “They came in, took a day, they were really busy, right before we started to shoot, and had some cool insight.”

According to Coogler, the Glovers didn’t suggest any big changes but helped build up some more character moments in the script, particularly with Shuri (Letitia Wright) making fun of her brother, King T’Challa (Chadwick Boseman). Were they responsible for “What are THOSE?” line? (If you haven’t seen the movie, we won’t give away the context.)

Glover elaborated a bit in an interview with Entertainment Tonight’s Ashley Crossan. (Go to the 0:43 mark, if you want to get past the awkward chit-chat.)

“Ryan was gracious enough to ask, ‘Would you take a look at this script?’ which was really cool for me and Stephen,” Glover said. “You know, Marvel locks things down, so we had not as much time as I wanted. We had a couple of hours to look over it, punch up some jokes and stuff like that. It was already there. They had already done a great job.”

The scenes between Shuri and T’Challa, along with T’Challa’s interactions with head bodyguard Okoye (Danai Gurira), were some of the most enjoyable parts of the film. So if the Glover brothers helped make those scenes even funnier, that was yet another good creative decision by Coogler in a movie full of them.

Glover was already set for a big year in 2018 with the second season of Atlanta premiering next month on FX (you can see the trailer here) and his much-anticipated role as young Lando Calrissian in Solo: A Star Wars Story. It’s already off to an impressive start with his contributions to Black Panther, which weren’t known until the acknowledgment in the credits. (And next year, he voices Simba in the Lion King live-action remake.)

If you’re among the few who haven’t yet seen it, Black Panther is currently in theaters. Season 2 of Atlanta premieres March 9 on FX. And Solo: A Star Wars Story hits theaters on May 25. It’s looking like the year of Donald Glover.

Despite leading 16-3 late in the fourth quarter, the New Orleans Saints were defeated 17-16 by the Tampa...

Despite leading 16-3 late in the fourth quarter, the New Orleans Saints were defeated 17-16 by the Tampa...