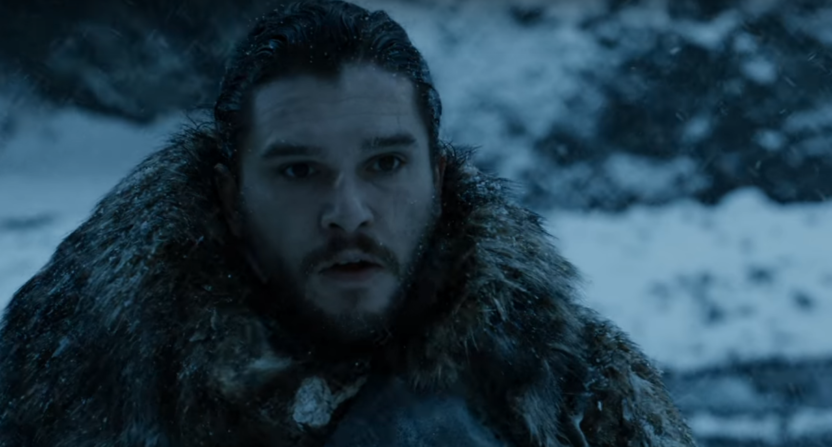 Reviews are in for Sunday night’s episode of Game of Thrones, and they are… not good. In fact, they’re terrible. By critical consensus, this was one of the worst episodes of the show’s run.

And although we at The Comeback respect your desire to watch Thrones for its base-level pleasures (dragons, zombies, fighting, etc.) we share in the broad disappointment over the show’s departure from all logic. Here, staff writers Alex Putterman, David Lauterbach and Sam Blazer discuss their frustrations with “Beyond the Wall.”

David: Last night’s episode had a ton of hype and spectacle, but I was underwhelmed.  There were too many plot holes for a show where the plot is sometimes the best selling point.

Alex: Yeah, I think a lot of people felt the same. After six and a half seasons of tight, thoughtful story-telling, GoT is suddenly taking shortcuts all over the place.

David: Gendry running is the best shortcut of it all. “Oh dude, go run to the wall and send a raven!”

Alex: Haha, yeah — the time element has definitely been a problem this season, but I think it goes deeper than that. The entire north-of-the-wall plot line was a shortcut. A bunch of characters did things that made no sense, just to accomplish a fiery White Walker-dragon battle.

David: That looked great, don’t get me wrong.

Sam: This feels oddly like an advanced stats debate in sports. You can point out the flaws and the areas where improvement is needed, but some are just watching for the entertainment value. Surface-level joy is what the show gives some people, while others (like us) like the theorizing and the minutiae of the tiniest plot details.

Alex: Yes! It was very visually exciting. From an action perspective, great episode.

David: Exactly that, Alex. Visually it was the best this show has ever done. But for all the hype the Night King is getting for killing that dragon, why did he go after Viserion mid-flight? Why not try to kill Drogon, who was a sitting duck with people on his back! He was saving your enemies! Kill him first!!

Alex: The whole episode was full of little issues like that. Why did Gendry run in a different direction from the others? Why didn’t the White Walkers throw spears at Jon and friends? How did the ice freeze over so quickly? How did Tormund survive an eight-on-one attack? How did Jon fight off so many wights under water? Where did the Night King get those chains? And holy hell, where did Benjen come from? Having a long-forgotten character who was barely developed save the day at the perfect time was some Harry Potter shit (shoutout to Fawkes). Game of Thrones is supposed to be better than that.

David: Too many questions with no answers.

Alex: And let’s be clear: Every show has some little holes here and there. No one will be perfect. But when these things start to pile up, and when it seems like plot is serving action instead of vice versa, that’s when we have trouble.

Sam: A difficult part of the show for me that I can’t reconcile is the fact that it’s suddenly lacking nuance. That’s what made GoT so great. You question who is good and who is bad. What are the right decisions at any given moment? This feels like any other show now.

David: “This feels like any other show now” is the best way to put it. Plot holes popping up consistently and not being solved at GOT‘s usual pace throws me off. It’s a trap a lot of shows are falling into (see House of Cards).

Alex: I’ve been worrying about that dynamic since we first met the Night King. This show is way more fun when the lines between good and evil are blurry. Jaime Lannister, for example, is about eight times more interesting than the Night King.

David: Yes!! And that was evident in last night’s episode. The NK is a badass — don’t get me wrong — but now we know how the characters can beat him, and with that solved it’s not that interesting. I care way more about how the Lannister and Targaryen and Stark political fights will play out then the inevitable war where Jon kills the NK. And that was heightened because last night’s episode basically told us that there’s only one way to beat the Army of the Dead, and that’s by killing the Night King.

Sam: We’re moving toward a Marvel-movie way of thinking. In the Avengers movies, they have faceless creatures that don’t really have an agenda other than destroying you. The Lannister, for their faults, have elements you cheer for. Dany’s early season power struggle has you invested in her later battles. The White Walkers are the big enemy, but with the way the show is progressing, they don’t feel like an interesting one.

Alex: I think back to why I fell in love with Game of Thrones originally. It wasn’t the battles, though those were obviously cool. It was the politics and shocking (but logical) twists and the sense that anyone could die at any time. Now the politics are mostly gone, there’s no time for twists, and we pretty much know that the half-dozen most important characters aren’t getting got this season. Apparently, even Tormund is too important to be killed off.

David: Alan Sepinwall made a good point that we haven’t had a truly shocking death since Joffrey or Tywin Lannister, and that was three seasons ago!

Sam: We know that George R.R. Martin gave the writers an outline to the end, but given his inability to finish the books, his source material is being slightly sullied. Where does the blame fall? Shortened seasons? GRRM not finishing the books? The showrunners not being good stewards of the material?

David: I think the shortened seasons is part of it. IMO, I’d rather have more episodes that are shorter than rushed travel, plot holes, and long episodes.

Alex: I think the showrunners deserve some blame for not pacing out the series better. This tweet really resonated with me.

Here is a visual representation of the pacing in Game of Thrones. pic.twitter.com/HObMQHagvr

David: As for travel, this map does the same for me.

Here is the distance Jon Snow has traveled compared to the White Walkers since the battle at Hardhome #GameofThrones pic.twitter.com/ieL8dcz52N

Alex: Yep. I wouldn’t have a problem with how wacky the travel has gotten if they hadn’t been so deliberate over the first five or six seasons. They used to spend a full season on a cross-continent voyage. Now it takes a few minutes. Why didn’t they foresee this becoming a problem? Why didn’t they realize earlier that they were running out of time?

Sam: The pacing has been really, really bad. I can handle the real fantasy portions of the show for what they are, but when you have 35 minutes of nonsense and then 20 minutes of action crammed in with very little explanation, you wonder how they thought it was a good idea.

Alex: And we haven’t even talked about the Arya/Sansa clash, which had a lot of Arya-lovers really pissed. For a super-capable, lie-detecting assassin, she sure seems oblivious to some obvious dynamics.

Sam: How are we to believe that she has no common sense now?

David: Seems like her season-long internship with the faceless men failed to help her in the way it was supposed to.

Alex: I think we should end with some optimism. Maybe now that the terrible, contrived mess of the “kidnap a wight” plot line is over Thrones will get back to being smart and thoughtful?

Sam: We should definitely get some good dialogue which this season has been lacking. But going into the final episode, doesn’t it feel like a little predictable? That never used to be the case.

Alex: Part of the problem is we’ve been thinking about this show for too goddam long.

David: Hahaha, that is true.

Alex: The last thing I want to say is that even if GoT from here on is just another fantasy epic, it is a really good one. We’ve got a lot invested in these characters, and there’s a lot of drama and mystery still to play out. So I’ll enjoy the final seven episodes, regardless of their shortcomings.

David: Oh, I completely agree. I love the show, even if I preferred the earlier seasons to the later ones.

Sam: Exactly. No one is turning this off. Cross your fingers that this is going to be a strong ending rather than a limp across the finish line.

1 thought on “Contrived plots, warped time and unkillable heroes: Why last night’s ‘Game of Thrones’ was so disappointing”