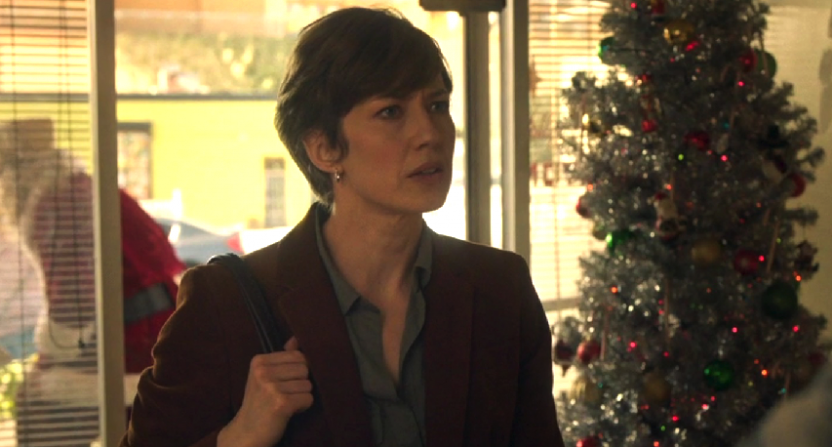 Though we’re early in Fargo‘s season three, one of the main characters has been a supporting player to this point. Police chief (well, former chief) Gloria Burgle has been on the fringes of the story in Eden Valley, Minnesota, dealing with personal and professional issues.

At home, her husband has left her — for a man — leaving her to raise their son, while his stepdad (?) swoops in with all kinds of cool gifts. At work, her police department is being taken over by the county and she’s butting heads with the new chief, Moe Dammack. But Gloria has a homicide to solve, the murder of her stepfather, Ennis Stussy. Or Thaddeus Mobley, the name he was known by as a sci-fi novelist in the 1970s.

Gloria couldn’t find out much about Ennis back home in Eden Valley. But she feels like there might be some clues in his former life. Why did he save a newspaper cutout of him winning a writer’s award in Los Angeles? Who is the young actress in the glossy photo he also kept?

The answers to those questions are in Los Angeles, so Gloria flies out to Hollywood to investigate. (By the way, Chief Dammack is not thrilled about her leaving town, even if she’s paying for the trip herself.) And here is where Fargo — both the TV series and the 1996 film that inspired it — truly shines. In the hands of someone other than showrunner Noah Hawley, or the Coen brothers before him, the easy thing to do would’ve been making fun of the small-town rube in the big city. 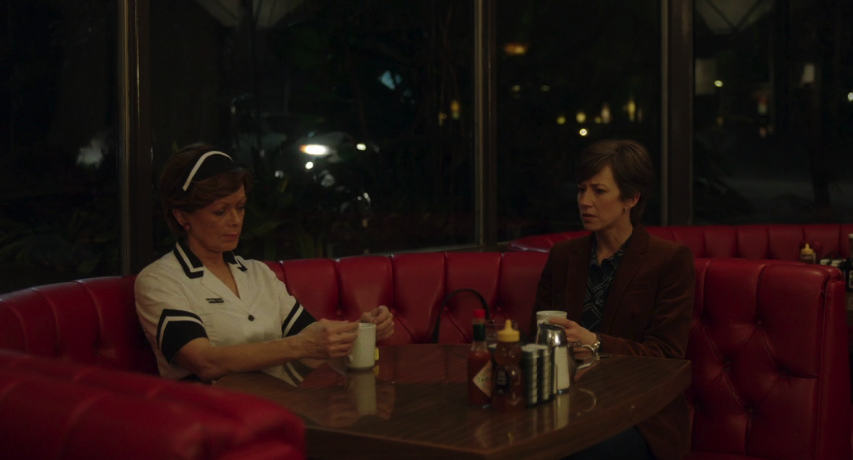 Sure, the show pokes fun at the exaggerated Minnesota accents, the frigid climate and simplicity of life in the Great Plains. But Hawley (and the Coens) never mock their characters. The teasing is good-natured, not mean-spirited. Law enforcement in small-town Minnesota — or throughout flyover country, for that matter — might largely deal with traffic stops, petty burglary, and bar fights. But it doesn’t mean that those officers aren’t good police who know how to investigate a crime.

Though nearly everyone pegs her as a visitor, surely overwhelmed by Hollywood, Gloria just sets her jaw and goes about conducting old-fashioned, shoe-leather style detective work. For the purposes of this episode — and perhaps all of season three — Gloria’s aversion to technology helps the story, following her as she tracks down each member of the cast in Thaddeus Mobley’s Hollywood Failure.

Largely through flashback, we see that Thad’s experience with Hollywood was a clichéd one. A moderately successful sci-fi author, young Thad (Thomas Mann) was recognized by his peers for his novel The Planet Wyh. In town to accept a Golden Planet award for Best Science Fiction Novel, the writer is reeled in by sleazy Hollywood producer Howard Zimmerman (Fred Malamud) who sees an easy target in a kid who orders cream soda at an open bar.

Seducing him with the idea of turning The Planet Wyh into a movie and companionship with beautiful young actress Vivian Lord (Francesca Eastwood), Zimmerman squeezes Thad out of the advance money he received for his next novel to fund his cocaine habit, keep up the appearances of a Hollywood player, and pay for the motel room the author is sequestered in to work on the screenplay for a movie that will never be produced. 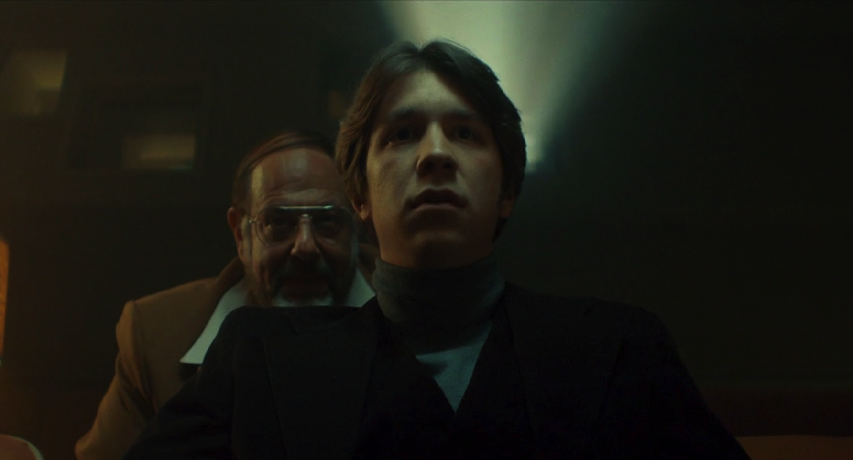 While trying to get a fix for his new cocaine habit — which is probably also fueling his motel room writing binges — Thad discovers the truth upon barging into Vivian’s apartment and seeing Zimmerman there. At that point, Zimmerman sees no reason to continue the ruse. He’s been played, his money leeched away by a predatory C-list producer and an actress doing whatever she has to in order to make it in Hollywood.

Humiliated and enraged, Thad attacks Zimmerman with his cane, viciously beating him. (During her investigation, Gloria finds out that Zimmerman was in a vegetative state for years until finally recovering.) He returns to his hotel room and while vomiting over this turn of events, Thad finds the new identity that he’ll adopt to forget about this embarrassing part of his life. The toilet is made by Dennis Stussy and Sons, and the “D” is scratched out on the stamped logo.

Gloria discovers this as well, as she coincidentally was put in the exact same room — Room 203 — at the Hollywood Premiere Motel during her visit. She had to fly 1,800 miles and go more than 30 years into the past to get to know the stepfather she only really associated with out of familial obligation — and a desire to have a male father figure in her son’s life. And she also learned what Thad did in a much harder lesson.

People are weird everywhere, and maybe even more so in a place where everyone pretends to be something other than what they really are. (This is the dark, quirky side of Los Angeles that the Coens have often portrayed in films such as Barton Fink, The Big Lebowski and Intolerable Cruelty.) And everybody wants something. Again, Gloria is underestimated as an out-of-towner from the plans by most everyone she encounters, most especially dickhead Officer Hunt (Rob McElhenney in a hilarious appearance), who thinks he can score an easy lay from the Minnesota girl with the funny accent and stolen suitcase. 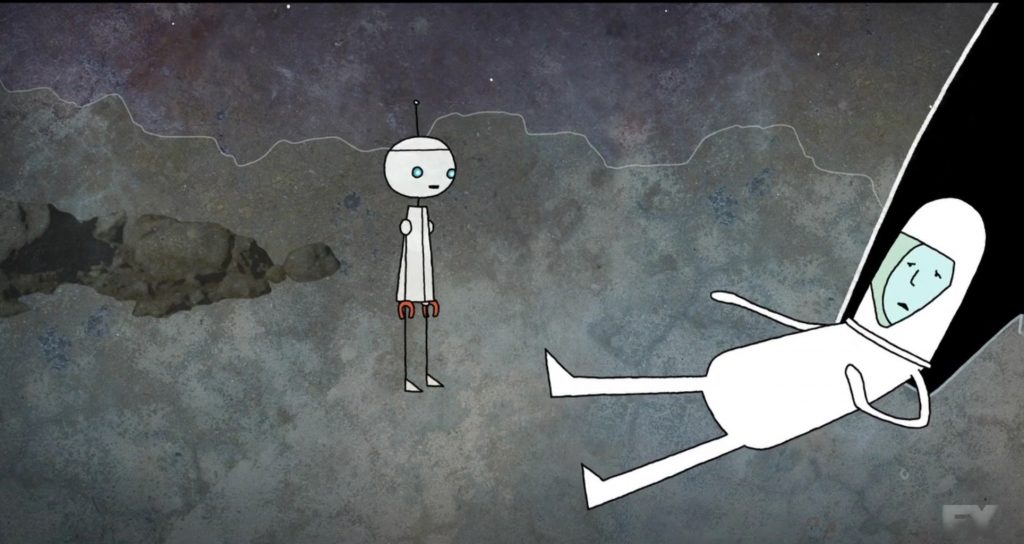 But for all but the very fortunate few, Hollywood is where dreams ultimately go to die, whether it’s the aspiring starlet who spends her later years waitressing at a diner, a wannabe producer living out his days in an old folks home, or a young writer with dreams of wealth and fame changing his identity and going into exile to escape his shame. As he wrote in The Planet Wyh — and illustrated in amusing animated sequences that further made the point that this story was a turn from the norm — his status was complete and it was time to shut himself down.

The question is whether Gloria got what she needed. Is there any possible connection to Thad’s Hollywood failure and Ennis’s murder? Or was Los Angeles a reminder that she still has a life waiting for her in Minnesota and plenty yet to pursue. Her switch hasn’t been shut off. Not even close. There’s a murder to solve and a professional identity to be reclaimed. Her deputy Donny pulled Maurice’s prints from the crime scene at Ennis’s house, and his recent death by air conditioner (in late December) raises her suspicions. That gives Gloria plenty of future moves to ponder over milkshakes and curly fries at Arby’s.

Was this episode too much of a diversion from the central plot, with the Stussy brothers, Nikki Swango and V.M. Varga nowhere to be seen this week? Some might feel that way, but this was also something of a breather after Fargo threw a lot at us in the season’s first two episodes. Gloria had been underserved to this point and if she’s as important to the narrative as presumed, then it was time to give her a moment in the spotlight where we get a better idea of her character and more hints as to how this entire story ties together. We’ll get back to Minneapolis and Eden Prairie next week.

1 thought on “Fargo season 3, episode 3 recap: The Law of Non-Contradiction”