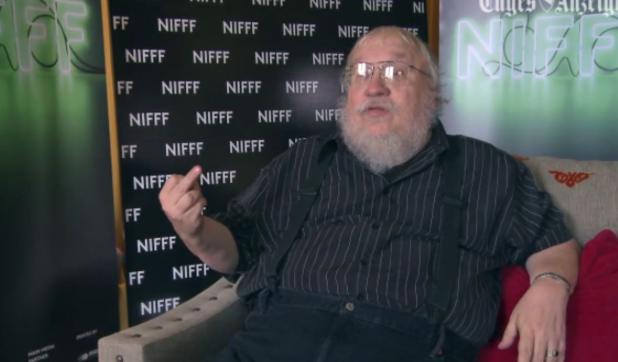 George R.R. Martin originally intended for his epic ‘A Song of Ice and Fire‘ series to be three simple books. Eventually, and in part because of his in-depth, leave-no-detail-unturned style, he discovered that his story had gotten too big and eventually expanded it into a seven-book series.

In his latest blog entry, published on Wednesday, Martin did drop in a little hint as to the status of the sixth book and the series as a whole:

“On the other extreme, I don’t consider A SONG OF ICE AND FIRE a series either; it’s one single story, being published in (we hope) seven volumes. FWIW, Tolkien wasn’t writing a series when he wrote LORD OF THE RINGS either. He wrote a big novel and his publisher divided it into three parts, none of which stands on its own.”

The HBO series on which ASOIAF is based on, Game of Thrones, has surpassed the books in terms of plot and is now in uncharted waters. Due to this and the way the storyline is playing out on screen, it’s possible that Martin could be deviating from the original plan he told HBO to follow because he doesn’t like the direction the show is taking.

It’s also possible that he just feels the need to write such intense details that the books are getting far too long. Given his track record, that’s probably the more likely scenario.

As Uproxx points out, the fourth book in the series, A Feast for Crows, ended up being too long and dense for one novel, resulting in GRRM having to split it into two books: A Feast for Crows and A Dance with Dragons. This could be how book six and maybe even seven play out, creating the need for an eighth, or maybe even a ninth, book.

However, in the comments section of the same post, Martin responded to one reader who asked if there was an eighth book in the works:

So what does this all mean? Who knows. But GRRM did lay out the possibility that while ASOIAF is supposed to be seven books, we have to hope it stays that way. At the same time, he also denied the existence of an eighth book. Like so many things in this series, it’s enough to make your brain hurt.