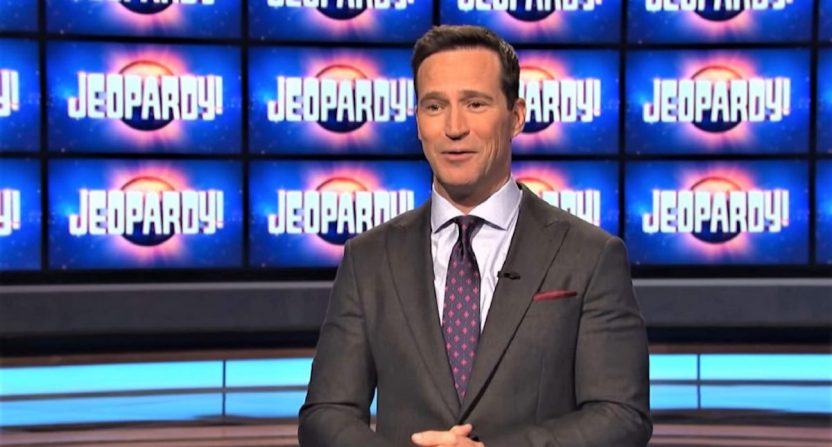 Jeopardy! has reportedly settled on its new host and successor to Alex Trebek. While the choice may not be draw as much mainstream buzz nor be as popular with fans — especially those checking in on celebrity guest-hosts throughout the summer — it probably is the best one for the show, especialy in the long term.

According to several outlets including Deadline and Variety, executive producer Mike Richards is finalizing his deal to take Trebek’s spot behind the podium. Richards joined Jeopardy! for the 2020-21 season and was the second in a series of guest-hosts following Trebek’s passing in November. He fronted the show after Ken Jennings from mid-February to early March.

Related: Who should be the next ‘Jeopardy!’ host? Awful Announcing writers make their picks

Richards might not have the pop culture sizzle of Jennings, actors Mayim Bialik (also a neuroscientist) and LeVar Burton, or the arguable breakthrough potential of Green Bay Packers quarterback Aaron Rodgers. But he also isn’t a news anchor or reporter, many of whom had guest-hosting turns during the past few months.

Mike Richards whole career has been building to hosting one of the major game shows. He got passed over for Price is Right.

I think he’s a better fit for Wheel, but there was no denying he’s good.

Just was hoping they’d go Ken Jennings or Buzzy or Mayim or even Aaron Rodgers. https://t.co/HvAbJdZfNg

The likes of Katie Couric, Anderson Cooper, George Stephanopoulos, and Robin Roberts might project authority, but most didn’t come across as particularly genial and were kind of boring.

At the very least, Richards has plenty of experience with game shows in front of and behind the camera. Before joining Jeopardy! (and Wheel of Fortune) as executive producer, he worked on the Jimmy Kimmel revival of Who Wants to Be a Millionaire? and produced Let’s Make a Deal and The Price is Right. Richards was also a producer on the first American version of Weakest Link.

On the hosting side, Richards fronted GSN’s revivals of The Pyramid and Divided. He also hosted WB’s Beauty and the Geek. Additionally, Richards was a candidate to host The Price is Right before Drew Carey was tapped to succeed Bob Barker.

"After an extensive and totally fair job search, I have decided to hire…myself" – Mike Richards

I have watched Jeopardy! every day for decades. The Mike Richards news is a bummer.

The lack of name recognition — in addition to Richards being a white male — has already drawn plenty of jeers on social media. And the executive producer choosing himself to host has raised eyebrows, especially among those who thought many of the guest-hosts were auditioning for the permanent gig. But Richards should be popular with diehard Jeopardy! fans and his guest-hosting stint was well-received.

[UPDATE: According to The Ringer’s Claire McNear, who’s written a book about Jeopardy!, Richards isn’t a favorite of the diehard fan community.]

Perhaps most importantly, Richards isn’t better known for his work elsewhere or attached to other commitments, and can feasibly settle in as host for a long run. Whether or not his tenure lasts 37 seasons as Trebek’s did obviously remains to be seen. But it’s easier to see Richards doing that than, say, someone with an acting or reporting career.

Everyone: We would love to have Levar Burton host of Jeopardy.

Jeopardy: We will give the job to the guy who hosted Beauty and the Geek, Mike Richards.

The timing of the announcement, shortly after NFL training camps opened, does raise the question of whether or not Rodgers was truly in contention for the hosting gig. Had he not decided to return to the Packers and play at least one more season in Green Bay, could he have been named Trebek’s successor?

Related: Poll has Aaron Rodgers behind only Ken Jennings among Jeopardy! viewers in the race for permanent host

Perhaps not. Especially if Rodgers gave indications he intended to play football for the 2022 and 2023 seasons. But it’s not an outlandish possibility either. Many Jeopardy! viewers — and many non-sports fans — were impressed with his guest-hosting run. And choosing him certainly would’ve grabbed headlines.

However, that’s now a moot point. Maybe we’ll see Rodgers and some of the other popular guest-hosts return as occasional fill-ins. (The next two guest-hosts will be CNBC’s David Faber and Fox Sports broadcaster Joe Buck.) But the future of Jeopardy! is now Mike Richards. And it will very likely be just fine.