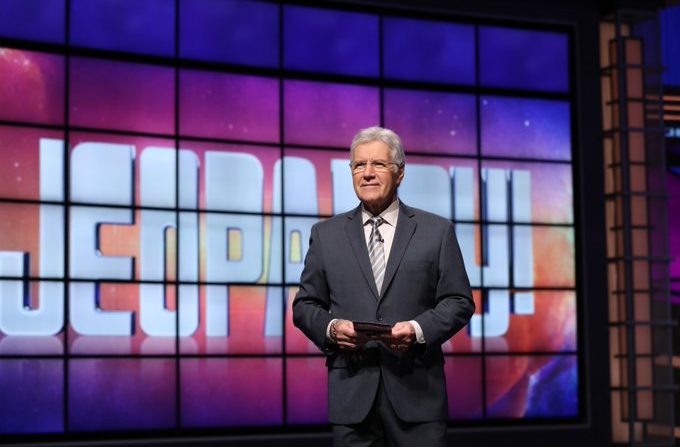 Famed Jeopardy! host Alex Trebek has passed away. Trebek, 80, had been battling Stage IV pancreatic cancer since early 2019, and on Sunday, the official Jeopardy! Twitter account shared the news of his passing:

Jeopardy! is saddened to share that Alex Trebek passed away peacefully at home early this morning, surrounded by family and friends. Thank you, Alex. pic.twitter.com/Yk2a90CHIM

Trebek had hosted Jeopardy! since its 1984 revival (it initially aired from 1964 to 1975 on NBC, then saw a 1978-1979 NBC revival, then came back in 1984 as a daily syndicated show from Sony). The since-1984 show has won a record 39 Daytime Emmy Awards, with Trebek alone earning 31 Daytime Emmy nominations for Outstanding Game Show Host and winning seven times. And it’s done tremendously well in viewership also, especially with various players’ streaks and with events like January’s Jeopardy!: The Greatest Of All Time pulling in ratings that beat some big live sports events. (Ken Jennings, Brad Rutter, and James Holzhauer, the three contestants from that series, are going to be featured on a new ABC trivia show, The Chase.) And a huge part of that has been about Trebek, who was credited with a Guinness World Record in 2014 for the most episodes of a game show hosted (6,829; that number’s now over 8,200).

Trebek was born in Sudbury, Ontario in 1940. He started his media career in 1961 by working at the CBC while still a student at the University of Ottawa, and would later say “I did everything, at one time replacing every announcer in every possible job.” That included reading national news and covering sports events from curling to horse racing. By 1963, he’d started hosting TV programs for CBC, beginning with Music Hop and running through quiz show Reach For The Top and game show Strategy. In 1973, he moved to the U.S. to host game show The Wizard of Odds for NBC, and followed that by hosting High Rollers, Double Dare, The $128,000 Question, Battlestars, Pitfall, and The New Battlestars. But it was his move to the Jeopardy! revival that would prove the most lasting, and that move made him a huge cultural figure.

Jeopardy! has always been interesting from a sports perspective, from otherwise-smart contestants who have struggled with seemingly–easy sports questions (sometimes with some funny commentary from Trebek) to sports figures who have done well and not so well on the show, to contestants’ failed attempts at a college basketball intro and to the show and Trebek making some notable sports references. And Trebek himself did something really cool earlier this summer, announcing the Ottawa Senators’ first draft pick in Jeopardy! form on the league’s draft broadcast:

Trebek took part in a lot of sports events over the years, from appearing on Championship Series Saturday and Sports-a-Plenty during his CBC days to carrying the Olympic torch in Florida in 1996 to handling the pre-game coin toss at his alma mater’s famed Panda Game in 2019. And he certainly made his mark on the sports world, and on the wider world, appearing as a guest star on How I Met Your Mother and Hot In Cleveland, guesting on countless talk shows (including the final episode of The Colbert Report), and moderating a gubernatorial debate in Pennsylvania in 2018. His run with Jeopardy! was incredible, and his record for episodes hosted is going to be tough to top. And he’ll be missed by many.