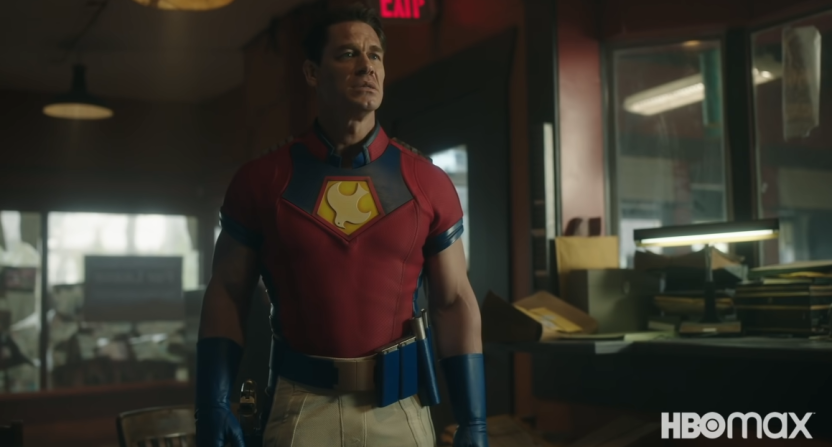 HBO Max original Peacemaker is one of the biggest television hits of the winter. Cena’s muscle-bound, politically-incorrect antihero originally made his film debut in last year’s The Suicide Squad. He was a magnetic scene-stealer, delivering hilarious lines such as his motto: “I made a vow to have peace, no matter how many people I have to kill to get it.”

Turning Peacemaker into his own spinoff series has been a rewarding move by HBO. According to Parrot Analytics, it’s the third-most in-demand new streaming series. Peacemaker has also drawn critical acclaim with a 94 percent score on Rotten Tomatoes. This latest creation from the DC cinematic universe is fresh, funny, and surprising in many ways. It also feels like a career-defining moment for Cena, who has been looking to reach a larger audience.

The former WWE champion is following a path similar to Dwayne Johnson. Pro wrestlers are natural-born actors. You play a role: the hero or the villain. Their performances are usually meticulously scripted and choreographed.

In the entertainment business, it takes work to reach the top. The tricky part is that even when wrestlers try acting, it can be challenging. They often have been playing the same role for so long that it’s difficult to break free. You become typecast. Hulk Hogan, Stone Cold Steve Austin, and others fell into that trap.

Credit Cena for recognizing early that one of his biggest strengths is his comedic timing. He understands how to deliver a punchline and the power of deadpan humor. Hollywood noticed Cena’s potential in the romantic comedy Trainwreck (2015) when he played Amy Schumer’s boyfriend. The movie also included Bill Hader and LeBron James. However, it was Cena who stood out.

According to Schumer, Cena improvised much of his dialogue, saying, “I did not write most of his lines. John Cena, he blew our minds.”

From that moment on, Cena’s best work has been in comedies like Blockers and Vacation Friends (he seemed so out of place when he was shoe-horned into the Fast & Furious franchise as Dom’s secret brother in F9).

But none of those roles have captured our imagination quite like Peacemaker. HBO must have known it had something special quickly, because it announced the TV spinoff before the Warner Bros movie was released. James Gunn, the director and writer of Peacemaker, also created The Suicide Squad. The marriage of Gunn and Cena has birthed remarkable television.

Cena has wanted to play superheroes before. If ever an actor was built to play one physically, it would be a brawny former wrestler. However, Cena was rejected for the title role of Shazam which went to Zachary Levi. He also tried out for the role of Cable in Deadpool 2 but lost out to Josh Brolin.

Persistence paid off. Peacemaker makes use of all of Cena’s strengths: his physique, his wit, his charm, and his willingness to push boundaries. It would have been all too easy to make Peacemaker a one-dimensional murderous oaf who cracked lukewarm one-liners. Cena’s interpretation of the comic book character is reminiscent of another classic HBO antihero: Kenny Powers of Eastbound & Down. Only a lot more bulked up and a little less narcissistic.

Peacemaker sometimes says terrible things but doesn’t always recognize that he’s being offensive. Empathy and sensitivity are learned, and Peacemaker (his real name is Chris Smith) had a horrific role model in his racist father (played brilliantly by Robert Patrick). The show is about Peacemaker’s growth and lack thereof while he’s on a secret mission surrounded by a team of oddballs. Watching Peacemaker struggling to connect with his teammates produces some of the show’s best moments.

Cena leans into his character. He doesn’t play it safe and makes great use of his body. He’s willing to be ridiculous and embrace his character’s flaws. That’s invaluable because not enough actors do that.

In one scene, he’s in the apartment of a woman he’s just hooked up with. Peacemaker is happy because after being in prison for four years, he’s finally had sex again. He celebrates by dancing in his tighty-whities, using a Hitachi Magic Wand as a microphone and singing “I Don’t Love You Anymore” by The Quireboys.

Another great moment is when Peacemaker and a nosey neighbor argue over Batman. Solid points here:

The show is eight episodes long, and we’re halfway through. HBO released the first three simultaneously on Jan. 13 and has since put out a new show weekly. You might think it’s building toward an epic showdown between Peacemaker and his father. You might think it’s building toward some sort of redemption for all the awful things Peacemaker has done in his past.

What we do know is that Cena is the biggest winner here. We’re eager to see what he does next.